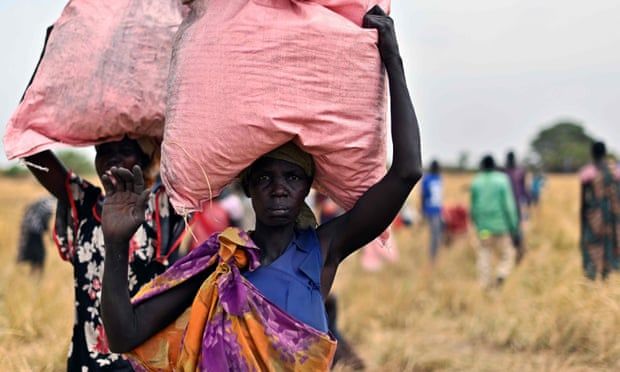 Internal reports show projected cuts including 59% in South Sudan, 60% in Somalia and 67% in Syria
Some of the poorest and most conflict-ridden countries in the world will have their UK aid programmes cut by more than half, according to a leaked report of discussions held in the last three weeks among Foreign Office officials.

The cuts include slashing the aid programme to Somalia by 60% and to South Sudan by 59%. The planned cut for Syria is reported at 67% and for Libya it is 63%. Nigeria’s aid programme would be cut by 58%.

The bare percentages include cuts of 50% in the west Balkans, and 60% in the Democratic Republic of the Congo. UK funding in the Sahel is listed as falling from £340m to £23m.

The numbers marked “official sensitive”, passed to the investigative website openDemocracy, are the first wider glimpse of the scale of aid cuts being contemplated after ministers’ decision to cut aid spending this year from the legal target of 0.7% of gross national income to 0.5%. The UK aid programme over two years is being cut from £15bn to £10bn.

The Foreign Office would not comment on the figures but said the “seismic impact of the pandemic on the UK economy has forced us to take tough decisions, including temporarily reducing the amount we spend on aid”.

It added: “We are still working through what this means for individual programmes and decisions have not yet been made.”

The scale of the cuts to individual aid programmes seems plausible after the government this week announced it was reducing aid to war-torn and famine-threatened Yemen by 59%. The UK contribution to what is probably the UK’s most high-profile aid programme is being reduced to “at least” £87m this year, down from £164m pledged last year.

The UN secretary general, António Guterres, described the overall cut in the UN’s aid programme this year as “a death sentence”.

UK ministers say the UK contribution is a floor, and not a ceiling, and more than £1bn has been given to Yemen since the civil war started five years ago.

The cut for Yemen discussed at the Foreign Office official meetings was 45% lower than that eventually announced.

According to the leaked document, the cut for Yemen discussed at the recent Foreign Office official meetings was 45%, lower than eventually announced.

Ministers have been making strenuous efforts not to give details of the practical impact of the cuts being contemplated by ambassadors and head office officials.

The full scale of the cuts for 2021-22 by country would not normally be published by until autumn 2022. The Foreign Office has rejected all freedom of information requests regarding the cuts in 2020-21, but the former international development secretary Andrew Mitchell this week told MPs the cuts in Yemen were “harbingers of terrible cuts to come”.

Mitchell is organising a backbench rebellion but ministers are seeking to avoid a Commons vote.

He said: “The foreign secretary assured parliament that he would protect seven strategic priorities from cuts, including humanitarian relief. He also told the select committee he would reply to the former solicitor general’s determination that cuts would be unlawful without a change to legislation. Nothing like what is being suggested here should be considered until parliament has given its express consent, which I rather doubt will be forthcoming.”

James Wani, Christian Aid’s country director in South Sudan, said: “Cuts on the scale being reported couldn’t come at a worse time for a country in crisis. The peace talks are at an extremely delicate stage, and FCDO funding has been crucial to Christian Aid’s work with local churches – as one of the most trusted institutions – in ending the conflict.

“Without funding for peacebuilding, the talks risk failure. And without peace, development and humanitarian work can’t succeed. People in South Sudan cannot afford for that to happen.”

At prime minister’s questions on Wednesday, Boris Johnson challenged Keir Starmer’s priorities when the Labour leader used all six of his questions to urge the Foreign Office to rethink its aid cuts.

Ministers are confident that aid cuts during the Covid crisis are supported by a public that wants to see belt-tightening across the board, but the popularity of the cuts, and the damage to the UK image abroad, may change once the practical impact becomes clear.

Four previous prime ministers – Tony Blair, Gordon Brown, David Cameron and Theresa May – have urged Johnson to consider the damage to the standing of the UK when no other G7 country is cutting its aid programme in this way.

Lady Sugg, a political ally of Cameron, quit as a Foreign Office minister in protest.

David Miliband, the president of the International Rescue Committee and a former Foreign Office minister, condemned the UK government’s decision, saying: “The phrase ‘global Britain’ rings hollow. As the UK prepares to host the G7, the reduction of assistance to Yemen is a stark warning of what is to come as the government delivers on widespread cuts across the entire UK aid portfolio.

“Make no mistake, as the UK abandons its commitment to 0.7%, it is simultaneously undermining its global reputation.”
#Covid  #Boris Johnson  #ANT
Add Comment