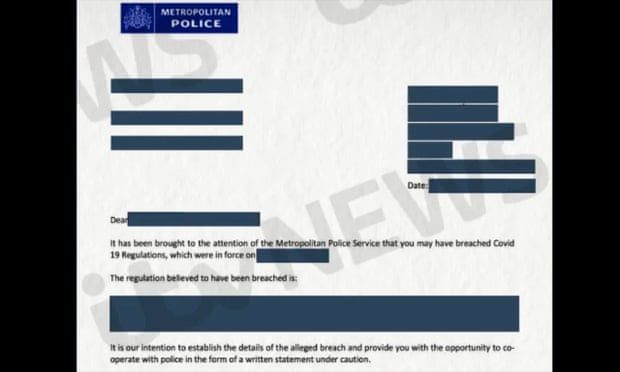 Boris Johnson has already returned his replies to the Metropolitan police’s questions, and is believed to have argued that he attended social events in No 10 in a work capacity.

A copy of one of the official questionnaires, obtained by ITV, shows it includes the police caution: “You do not have to say anything but it may harm your defence if you do not mention when questioned something which you subsequently rely on in court. Anything you do say may be given in evidence.”

Angela Rayner, Labour’s deputy leader, said: “This is an embarrassment that for the first time in UK history we have a PM interviewed under police caution.”

As well as asking the recipient to confirm their attendance at a specific event, the leaked questionnaire shows they were also asked: “What was the purpose of your participation in that gathering?” and “did you interact with, or undertake any activity with, other persons present at the gathering. If yes, please provide details.”

Recipients were offered the opportunity to give a “lawful exception” or “reasonable excuse” for attending. Johnson is understood to have hired a lawyer to help him draw up his responses, which Downing Street has confirmed were submitted before the deadline of last Friday.

Questionnaires are still being sent to some officials. The Met will then have to decide whether to impose fixed penalty notices for breaking lockdown rules.

The Met investigation into 12 social events, several of which the prime minister is known to have attended, was triggered by evidence uncovered by the senior civil servant Sue Gray, whose full report on her inquiry will not be published until the police have completed their work.

Johnson’s allies are convinced he has a justification for attending events that took place at No 10, which is his home as well as his workplace. He initially denied reports that parties had been held in Downing Street, telling MPs: “All guidance was followed completely.”

Receiving a fixed penalty notice for breaching rules that he himself drew up is regarded as unacceptable to many backbenchers, and would be likely to prompt more letters calling for a vote of no confidence.

If 54 such letters are submitted to the chair of the 1922 Committee, Graham Brady, a vote of no confidence in Johnson would be triggered, and if he lost such a vote, his premiership would be over.
#Boris Johnson  #Johnson
Add Comment