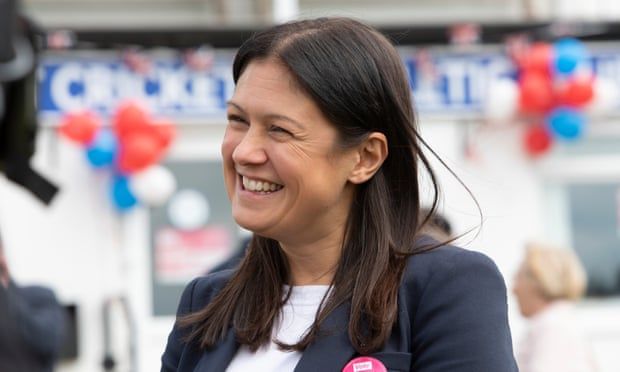 Labour has ‘nothing to fear’ from Tory PM candidates, says shadow minister

Bridget Phillipson says candidates engaged in ‘arms race’ of tax cuts without explaining their potential impact
The shadow communities secretary, Lisa Nandy, will claim the Conservative leadership contest has shown the government’s commitment to levelling up is dead, as she announces plans to give local communities the right to buy up assets such as empty shops.

Nandy will use a speech in Darlington to say Labour would press ahead with handing power to communities outside London and the south-east in an attempt to rebalance the UK’s economy.

“Those voices in the Tory party who tried to advance the levelling up agenda have been roundly defeated and now the ugly truth of this is on full display as leadership contenders vie for the mantle of Margaret Thatcher, promising tax cuts for the wealthy, deregulation, and more managed decline across Britain,” she is expected to say.

“In short, the Tories’ commitment to levelling up is dead. But levelling up is not dead. Not for the millions who voted for change – and who need and deserve to see it delivered.”

She will announce that a Labour government would create a new “community right to buy”, giving local groups first refusal on bidding for high street shops that have been vacant for a long time, as well as assets earmarked as important by the council, such as football clubs, pubs and playing fields.

Communities are already allowed to bid for these so-called assets of community value, but as well as first refusal Labour would also give them a year to raise the funds, up from the current six months.

Labour has also asked Mark Gregory, a former chief economist at Ernst & Young, to lead a commission on how communities can best bring public and private sector funding together to generate revenue that can be used locally.

Nandy is expected to say: “This is the first step on the way to greater financial autonomy for our towns, villages, and cities. The only conditions attached are that it must raise revenue to be used and passed down through the generations, and that it must be driven by the wishes of the community, held in common, and used for the common good.

“Because what is needed is not a Hunger Games-style grants system where we have to go cap in hand to Whitehall, but financial autonomy.”

Her intervention comes after the shadow education secretary, Bridget Phillipson, said Labour had nothing to fear from any of the Conservative leadership candidates.

Asked by Sophy Ridge on Sky News which contender her party was most concerned about, Phillipson said: “I’m not worried about any of them. I don’t think we’ve got anything to fear from any of the candidates, and the reason for that is that all of them have propped up Boris Johnson and the Conservative government for 12 years now.

“And over those 12 years, what have we seen happen in our country? We’ve seen our vital public services, whether that’s schools or hospitals, get worse and worse. Britain is completely stuck. You can’t renew your passport, more and more people going to food banks, rising levels of child poverty.”

Labour strategists have been taken aback by the extent to which cabinet ministers have been ready to disown the record of a government in which they are still serving.

In particular, the foreign secretary, Liz Truss, who has the backing of the Boris Johnson loyalists Nadine Dorries and Jacob Rees-Mogg, has questioned the way her party has managed the economy.

“Now is the time to be bold,” she said at her campaign launch last week. “We cannot have business-as-usual economic management which has led to low growth for decades.” Comments such as this are being stored up by Labour for future election campaigning.

Some senior Labour figures had been concerned by the potential electoral appeal of Penny Mordaunt, who has performed well among focus groups, but have been reassured by her failure to set out detailed policy.

“She’s very superficial,” said one shadow minister, adding that Tom Tugendhat could present more of a challenge to Labour, but had no chance of winning. Tugendhat trailed in fifth position in Thursday’s second round of voting.

Keir Starmer will have one of his final opportunities for an extended debate against Johnson on Monday after the government tabled a motion of confidence in itself. The decision followed a row last week after Labour laid a motion of its own asking MPs to express whether they had confidence in a government led by Johnson.

The government initially declined to allow the parliamentary time for Labour’s motion to be debated – before tabling one of its own, more narrowly worded to exclude a reference to Boris Johnson.