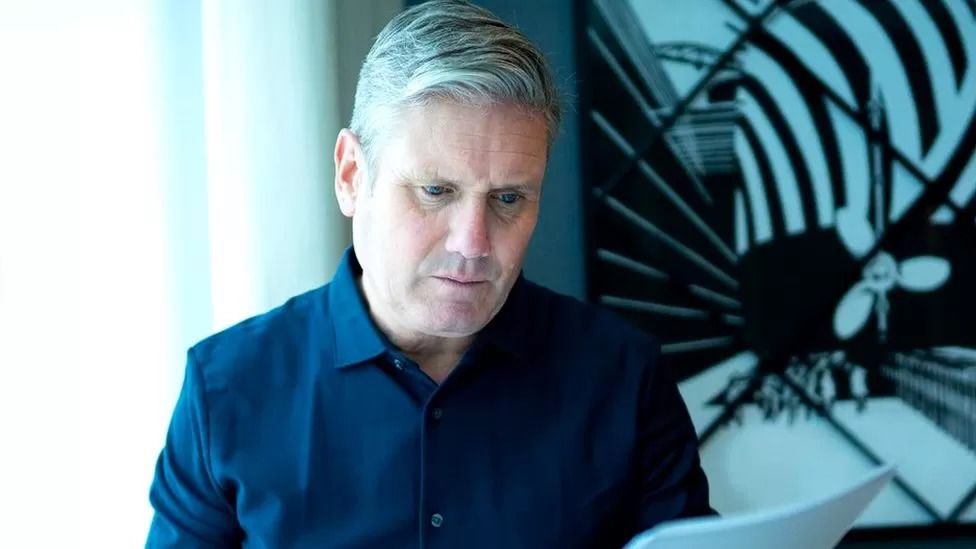 In his speech to his party's annual conference, Sir Keir will claim to have transformed Labour into a party in tune with the majority of voters.

He will accuse the government of losing control of the economy.

And he will quote predecessor Sir Tony Blair, who once described Labour as the "political wing of the British people".

Mr Blair was the last Labour leader to win a majority at a general election.

His name has been out of favour in left wing circles in recent years - but Sir Keir hopes to emulate him at the next general election by ejecting a long-serving Conservative government from power.

Labour's conference has been overshadowed by economic turmoil, as the markets reacted to Conservative Chancellor Kwasi Kwarteng's plan to borrow billions to fund tax cuts.

In his speech, Sir Keir will say: "What we've seen from the government in the past few days has no precedent.

"They've lost control of the British economy - and for what? For tax cuts for the richest 1% in our society."

Sir Keir's strategy to boost growth includes a green prosperity plan to create a million new jobs in towns and cities across the country.

He will pledge to bring down energy bills, raise living standards and tackle the climate crisis, within 100 days of forming a government.

And he will tell delegates in Liverpool he is ready to "fight the Tories on economic growth" with a plan to "turn the UK into a growth superpower" by investing heavily in green energy projects.

Sir Keir will argue "we cannot afford to miss out" on the opportunity to lead the world in renewable energy, electric vehicles and harnessing new hydrogen power.

He will also claim that Labour is now the party of "sound money".

A Labour spokesman said echoing Sir Tony Blair is an intentional move to show that Labour is "back in the centre ground" and in the "mainstream" of public opinion.

"Ultimately he wants to be the next Labour leader who takes the party from opposition into government," the spokesman said.

In his speech, Sir Keir will cite the respectful tribute to the late Queen Elizabeth II at the start of the conference on Sunday, as an example of how much the party has changed since he took over in 2019.

Some Labour delegates were unhappy about Sir Keir's decision to lead a chorus of God Save the King but criticism from the left of the party has so far been more muted than last year, when Sir Keir was heckled during his keynote speech.

In this year's speech, Sir Keir will declare that Labour will get the UK "out of this endless cycle of crisis with a fresh start, a new set of priorities and a new way of governing".

"We should never be left cowering in a brace position, worrying about how to get through a winter. It's time for Britain to stand tall again," he will say.

Sir Keir has pledged to reverse the abolition of the top rate of tax income, but would keep the chancellor's reduction of the bottom rate to 19p in the pound.

Shadow chancellor Rachel Reeves has said her fiscal rules set out that increased borrowing is permitted during national emergencies.