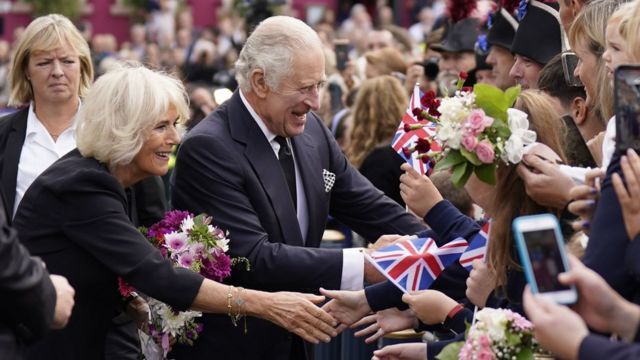 Members of the public have been invited to line the route as King Charles III approaches Cardiff Castle on his first visit to Wales as monarch on Friday.

The King and Queen Consort will also attend a prayer and reflection service for Queen Elizabeth II at Llandaff Cathedral.

A silent protest against the monarchy will also be held at Cardiff Castle.

It will be led by former Plaid Cymru Member of the Senedd Bethan Sayed, who will be joined by trade unions, Labour for an Independent Wales and equality campaigners. 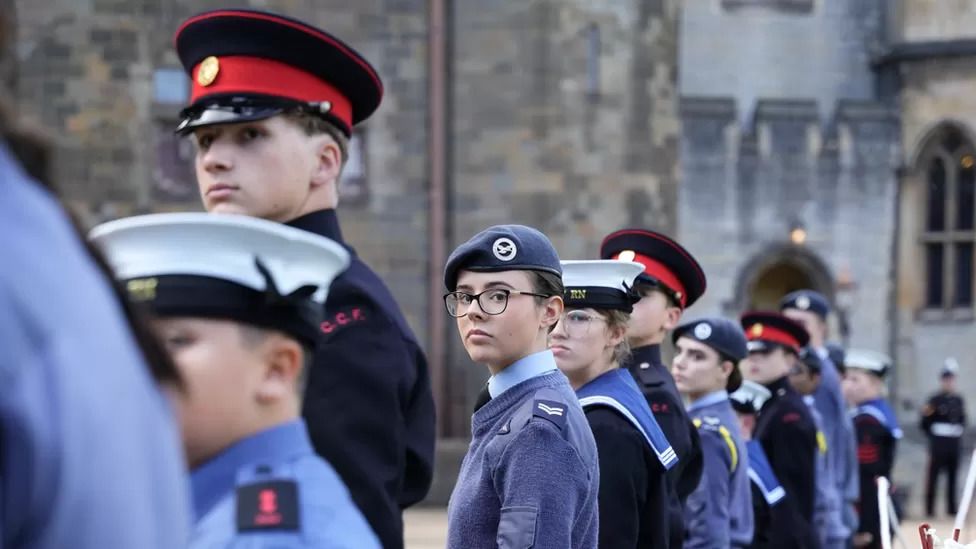 The King is due to visit Cardiff on Friday

"It is about fairness, equality, and the Wales we want to shape for future generations."

Welsh military units from across the Army, navy and RAF will mark the occasion with a royal gun salute and ceremony.

Reservists from 104 Regiment Royal Artillery will fire from Cardiff Castle to signal as the King arrives in Wales.

At Cardiff Castle, the King will be received by the Royal Welsh regimental band, led by regimental goat Shenkin IV and Goat Major Sgt Mark Jackson.

What roads will be closed on Friday?

Several roads in Cardiff city centre will be closed from 06:00 BST until 18:00 on the day of the visit.

The motorcade will drive along St Mary Street on its way to the castle and Cardiff council said it expected large crowds to gather in advance of its arrival. 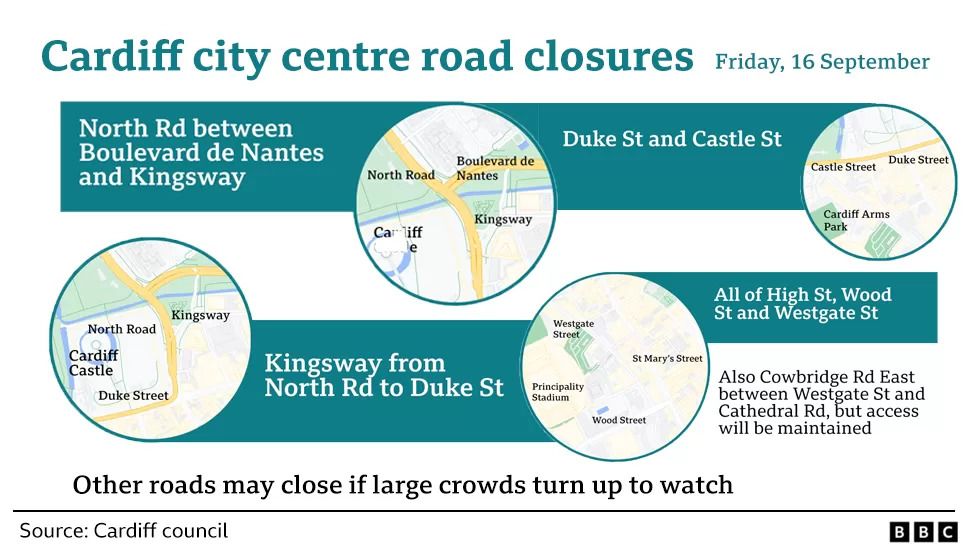 Where can I see the King on his visit to Cardiff?

The monarch and Queen Consort will be joined by an invited congregation at a service at Llandaff Cathedral.

Cardiff council has warned accessibility and opportunities for viewing and parking will be limited.

Following the service, they will travel to the Senedd in Cardiff Bay, where they hope to meet some members of the public before departing for the castle.

The visit to Wales' capital is expected to end with the King and Queen Consort greeting members of the public in the castle grounds. 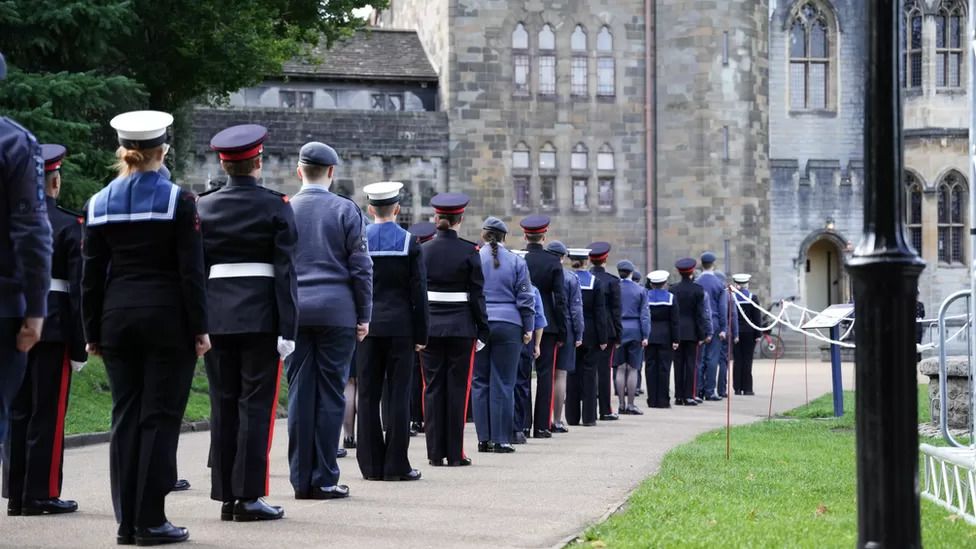 Rehearsals for the visit have been taking place

Opening time for public entry is yet to be decided, but the organiser, Cardiff Council, said people should expect very long queues from early in the day.

Members of the public are also welcome to leave flowers on the lawn on either side of City Hall's main entrance.

"Our advice is to plan ahead, dress for the weather, bring plenty of water, prepare for long periods of standing, expect crowds and watch out for those around you and with you," Cardiff Council said in a statement.

Entry to the castle will be on a first-come-first-served basis.

What is the best way to travel for the King's visit?

Cardiff council recommended people who live locally to walk to events, while those coming from further afield travel to the city by train, although it said services would be busy. 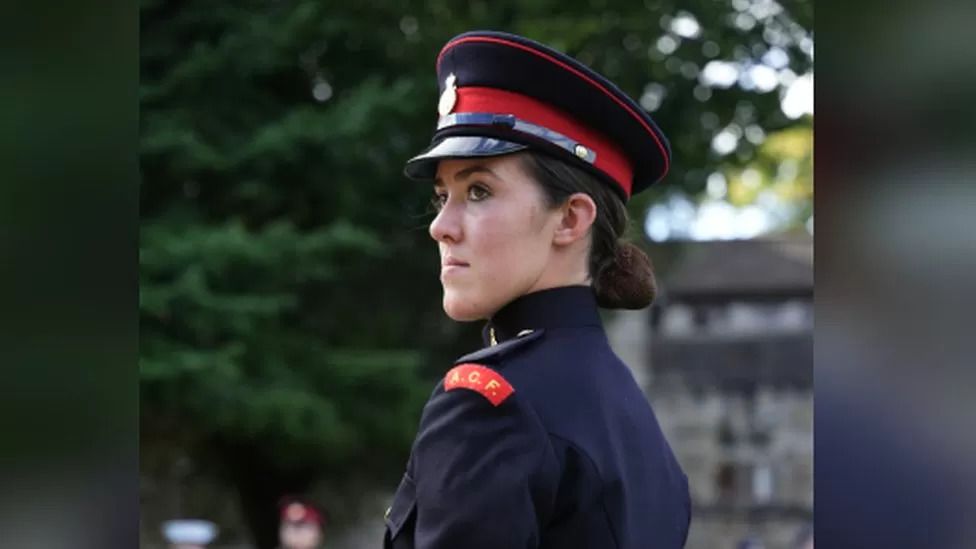 Members of the public have been invited to line the route

The nearest railway stations to Llandaff Cathedral are Waungron Park and Fairwater, but passengers travelling to Llandaff from Cardiff Central are advised to use the bus.

In the city centre, bus routes will be diverted because of road closures and St Mary Street taxi rank will be closed from 06:00 until 18:00.

Rehearsals have been held for King Charles' visit to Wales