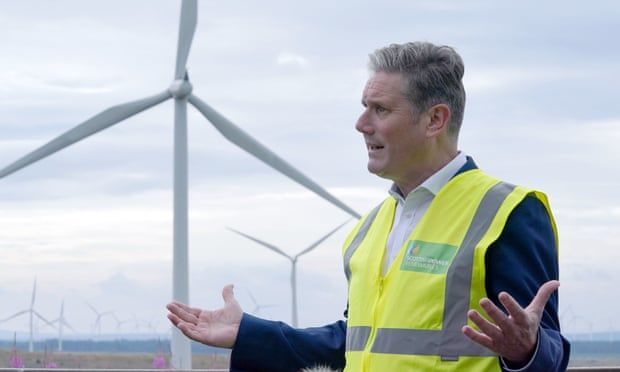 Labour sources say climate crisis and green jobs will be key themes, amid concerns about leader’s commitment to policy
Keir Starmer is committed to debating plans for a green new deal at Labour’s conference later this month, his team have insisted, despite the party having rejected a grassroots motion on the issue.

Labour sources said the need to transform the economy to meet the climate challenge and create green jobs in the UK would be a key theme in Starmer’s conference speech, and in a lengthy essay for the Fabian Society he is due to publish in the run-up to the conference in Brighton.

During last year’s Labour leadership campaign, Starmer wrote: “We need a green new deal hardwired into every level of government,” but some green activists are concerned about whether the leadership remains committed to the policy.

The frontbenchers Rachael Maskell and Olivia Blake, and backbench MPs including the former shadow chancellor John McDonnell, have joined those calling on the party to reverse a decision to rule out of order a conference motion calling for Labour to endorse a green new deal.

The row blew up as it was announced that McDonnell would be joined by video link at The World Transformed, the leftwing conference fringe, by the former US presidential candidate Bernie Sanders.

McDonnell said he and Sanders would discuss the progress of the “new left” on both sides of the Atlantic, including “the struggles of socialists and progressives within the Labour party and Democratic party”, underlining fears that The World Transformed could become a focal point for leftwing opposition to Starmer’s leadership.

Jeremy Corbyn, who remains a Labour member though he has been stripped of the party whip, is expected to address a series of fringe meetings in Brighton.

Labour insists the green new deal motion, passed by 21 local parties and endorsed by the leftwing Momentum campaign group, was rejected because it was too broadly drawn, bringing in policies such as universal free broadband. Some party figures see it as an attempt to shoehorn parts of Jeremy Corbyn’s 2019 manifesto into Labour policy.

But Blake, who is Labour’s shadow minister for nature, tweeted: “You can’t draw lines around the climate emergency – our response to it should thread through all the work we do.” She added that she hoped the decision by Labour’s conference arrangements committee would be reversed.

Chris Saltmarsh, a co-founder of the internal pressure group Labour for a Green New Deal, said: “The idea that this motion covers more than one subject makes a mockery of the idea of a joined-up response to climate change.

“Labour’s leadership have revealed they have little understanding of the idea that responding to climate change requires action across sectors.”
Add Comment