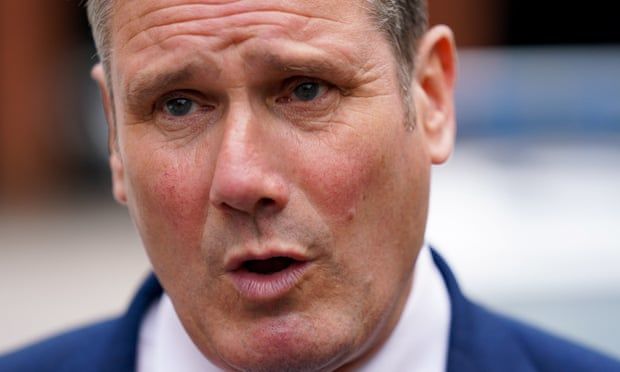 PR experts tell party leader to utilise well-respected figures such as Andy Burnham and Mark Drakeford
Keir Starmer should invite the Manchester mayor, Andy Burnham, and the Welsh first minister, Mark Drakeford, to join a powerful new “political cabinet” to help Labour shape policy and get its message across to voters, according to a report by PR experts.

“Fit for the future” published by a 1,200-strong network called Labour in Communications, urges Starmer to slim down the shadow cabinet and give a more prominent role to well-respected Labour leaders from around the UK.

The experts also call on Starmer to avoid reams of detailed policy in favour of a more pared-down offering that could ultimately be represented on a 1997-style “pledge card”.

“Labour should look to restructure the shadow cabinet and communicate through a leaner group of members to improve the perception and awareness of Labour’s shadow cabinet among the public,” the report says, highlighting the low public profile and lack of government experience of some on the current frontbench.

“The grouping would effectively operate as a ‘political cabinet’ and would have sole responsibility, as Labour’s dedicated spokespeople, to frame, develop and communicate Labour’s message to the public,” the report adds.

“Figures in power from across the Labour movement – such as Mark Drakeford, Andy Burnham, Sadiq Khan, Tracy Brabin and Steve Rotheram – should be invited to join the political cabinet and given the chance to influence the party’s national strategy and decision-making.”

Including Starmer, Labour’s shadow cabinet currently has 34 members. The shadow cabinet has a formal standing under Labour’s rulebook – but leaders have often taken advice from smaller groupings.

At the height of the Covid-19 crisis, Starmer relied on regular meetings of an inner group, including senior figures such as Rachel Reeves and Nick Thomas-Symonds, to make key decisions – though Drakeford, Burnham and others would probably be too busy with their day-jobs to offer such intensive input.

Burnham was re-elected as Manchester metro mayor with 67% of the vote in May. He became a prominent critic of the government’s Covid policies at key moments during the pandemic, when much of the north-west of England faced stringent lockdown restrictions.

He has not ruled out a return to Westminster and some Labour MPs believe he could be a future leadership candidate.

With Starmer’s first in-person conference speech looming later this month, Labour in Communications urge the Labour leader not to be tempted into setting out a long list of detailed policies or a sweeping political vision.

“All too often politicians feel like they have to set out what George HW Bush disparagingly called ‘the vision thing’: a West Wing-style speech setting out a political leader’s core beliefs that can get voters’ hearts going. Instead, what Keir Starmer should do is concentrate on answering a simple question: why are you in politics and what are you setting out to achieve?” they say.

In a foreword to the report, the former Labour leader Neil Kinnock says: “Not for the first time, we have to rebuild, modernise our methods, restore relevance to our message, show that we have deep commitment to our country and communities and practical answers to the demands facing the British people”.

Tony Blair’s Labour party fought the 1997 general election with the aid of a five-point pledge card, featuring promises including cutting class sizes for five- to seven-year-olds, and cutting NHS waiting lists by treating an extra 100,000 patients.

The report suggests Labour should work towards a similarly bold offering at the next general election, which could come as soon as 2023 – and meanwhile should focus on developing a “unifying narrative” to explain its approach.

Labour in Communications brings together Labour-supporting communications professionals from charities and the private sector as well as inside politics.
#COVID-19  #Covid
Add Comment