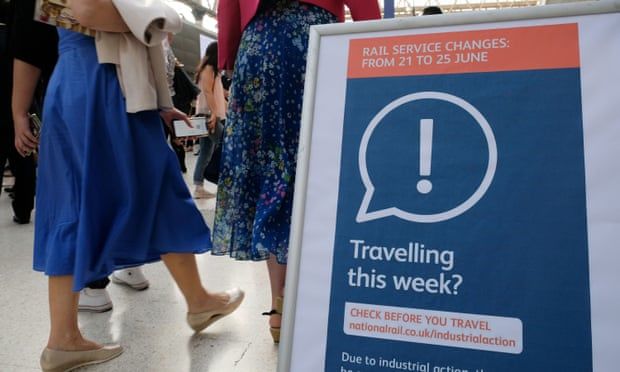 Labour’s frontbenchers have been warned to stay away from picket lines on the eve of the biggest rail strike since 1989.

As staff get ready to take part in the RMT strike on Tuesday, Keir Starmer’s office told shadow cabinet members that to “show leadership” frontbenchers “should not be on picket lines”.

The order from the leader’s office said: “We have robust lines. We do not want to see these strikes to go ahead with the resulting disruption to the public. The government have failed to engage in any negotiations.

“However, we also must show leadership and to that end, please be reminded that frontbenchers including [parliamentary private secretaries] should not be on picket lines.

“Please speak to all the members of your team to remind them of this and confirm with me that you have done so.”

The reported memo, published by Politics Home, comes on a day that the general secretary of the RMT said that the country was facing a “wave” of industrial action and that Labour should be in harmony with it.

The RMT’s industrial action begins on Tuesday, with further stoppages on Thursday and Saturday meaning only a fraction of services will be running on the UK’s network. London Underground services will also face huge disruption on Tuesday as staff will walk out in a different dispute.

“So Keir Starmer and his team have got to work a way how they can connect with that and how they can ride that wave of resistance and are in harmony with it. Rather than standing to one side and waiting for somebody to tell them what to do.”

The move represents Labour trying to further publicly distance itself from trade unions under Starmer’s leadership, a contrast to under Jeremy Corbyn where the party was closely tied to Len McCluskey’s leadership of Unite.

The rail union Aslef and the Fire Brigades Union (FBU) have voted this year on whether to disaffiliate from Labour, but both have chosen to continue the association.

Some backbench MPs, including Zarah Sultana and Paula Barker, have said that they will be supporting striking workers on picket lines, but no shadow ministers have indicated they will break the order.

The general secretary of Unite, Sharon Graham, told PA Media: “The Labour party was founded by the trade unions and we expect Labour MPs to defend workers, by words and by actions. To instruct Labour MPs not to be on picket lines with workers speaks volumes.

“You don’t lead by hiding. No one respects that. It’s time to decide whose side you are on: workers or bad bosses?”

Manuel Cortes, general secretary of the Transport Salaried Staffs’ Association, whose members have already balloted for strike action later this year, said: “This is ridiculous nonsense from the party which was created by trade unions. Solidarity is what our movement is all about.”