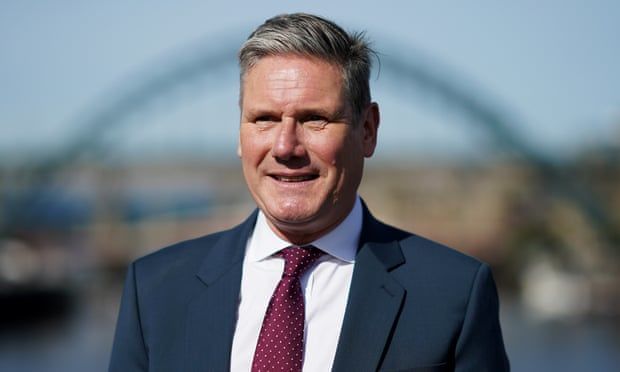 Keir Starmer: Labour will fight next election on economic growth

Opposition leader to say ‘making the country and its people better off’ is main priority for party
The Labour leader, Keir Starmer, will attempt to frame the next general election as a battle for the economy, declaring on Monday that a Labour government’s priorities would be “growth, growth and growth”.

Echoing Tony Blair’s assertion in 1996 that his main priorities would be “education, education and education”, Starmer is expected to say in a major speech in Liverpool that there is “no task more central to my ambitions for Britain than making the country and its people better off. This is why I am clear Labour will fight the next election on economic growth.”

He will outline plans for a new industrial strategy council, established on a statutory footing to become “a permanent part of the landscape, that sets out strategic national priorities that go beyond the political cycle; holds us to account for our decisions; and builds confidence for investors that will boost long-term growth and productivity”.

He will say the pandemic and the cost of living crisis have shown that the British economy in its current state is too “brittle”.

The speech comes amid forecasts that the UK’s economic growth will stagnate next year, with consumer price inflation running at 8.2% for the year to June, and a Conservative leadership contest that has seen bruising clashes over the economy, with Rishi Sunak describing Liz Truss’s plans to borrow billions to fund tax cuts as a “fairytale”.

However, Starmer is also facing a challenge from the left of his party, with Rebecca Long-Bailey, the shadow business secretary under Jeremy Corbyn, calling on Sunday for Labour to drop its cautious approach to the economy and fight on a radical manifesto including state ownership and a living standards contract between government and the public.

Starmer has been trying to pitch Labour as the party of fiscal prudence and will say: “With me and with Rachel Reeves [the shadow chancellor], you will always get sound finances; careful spending; strong, secure and fair growth. There will be no magic-money-tree economics with us.”

Long-Bailey represents thinking on the left of the party that is concerned Starmer may abandon interventionist policies such as state ownership of utilities that she argues would help with the cost of living crisis.

Starmer’s speech is not billed as providing detailed policies to deliver growth and he has faced questions over how much he would be able to achieve if a long-term global recession and high inflation set in.

However, he will say his economic plan will be founded on three principles – “strong, secure, fair”.

“Strong, because it will build a foundation where every business and every person plays a role,” he is expected to say.

“Secure, because it will produce good jobs that don’t leave people feeling insecure.

“Fair, because it will unlock the potential of every place – every community, every town and every city.”

In an episode of The Rest is Politics podcast last week, the former Conservative cabinet minister Rory Stewart asked Starmer about his economic plans.

“We are about to head into a 10-year global recession and even if you become prime minister, you have got very limited control,” Stewart said. “What on Earth are you going to do with interest rates and inflation?”

The Labour leader said he wanted to provide “certainty and trust” to investors so the manufacture of items such as wind turbines that generate power in the north of England would not be outsourced to countries such as China.

Meanwhile, the Liberal Democrats are planning to roll out attack ads against Sunak over the tax rises he announced when he was chancellor.

Polling for the party suggests the increases are “as big a vote loser for the Conservative party as Boris Johnson in the south-east of England”, which the Lib Dems believe will be a key “blue wall” battleground at the next election.
#Boris Johnson  #Johnson
Add Comment