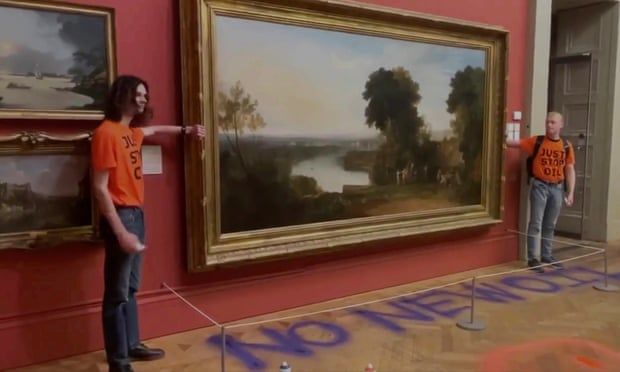 Supporters of group say young people have ‘nothing to lose any more’ as they call for end to new oil and gas projects
Two young supporters of Just Stop Oil have glued themselves tothe frame of a JMW Turner painting at Manchester Art Gallery.

It is the third time this week that supporters of the group, which is calling for a government-imposed moratorium on new oil and gas extraction projects, have glued themselves to major works in UK galleries.

On Thursday they glued themselves to the frame of a Vincent van Gogh painting at the Courtauld Gallery in London. On Wednesday they did the same to a Horatio McCulloch artwork in Glasgow.

“The youth of the world have literally nothing to lose any more, we are a generation sacrificed,” said Paul Bell, a 21-year-old physics graduate from Birmingham, one of the pair who glued themselves to the frame of Thomson’s Aeolian Harp, an 1809 landscape showing a view of the Thames from Richmond, London.

“There are millions in fuel and food poverty, our wildlife and landscapes are devastated and we face famine and war. Our government is accelerating the chaos by allowing new fossil fuel infrastructure. We will not stand by and let this creeping evil continue.

“No one gets a free pass. By refusing to use its power and influence to help end this madness, the art establishment is complicit in genocide. Directors of art institutions should be calling on the government to stop all new oil and gas projects immediately.”

Just Stop Oil’s latest actions follow a campaign of disruption against oil terminals in the Midlands and the south of England this spring. Hundreds of activists took part in trespasses, blockades and tunnel protests in an effort to paralyse the distribution of oil in south-east England and London.

That campaign was preceded by a number of pitch invasions at high-profile football matches, where activists glued or zip-tied themselves to goalposts in an effort to disrupt play.

A Just Stop Oil source hinted that the art gallery actions were intended as a way to keep attention on the group’s cause before more action in coming weeks and months.

On 27 July the group is planning a mass protest in London in collaboration with Jeremy Corbyn’s Peace and Justice project, under the banner: “We all want to just stop oil.”

“It’s not a switch [in strategy]; it’s mobilising actions for young people, doing something high-profile, a bit like the sport actions that we did,” the source said. “We are just switching it up a little bit with small-scale high-impact actions. But then we are aiming to mobilise for mass actions later in the year.”
Add Comment