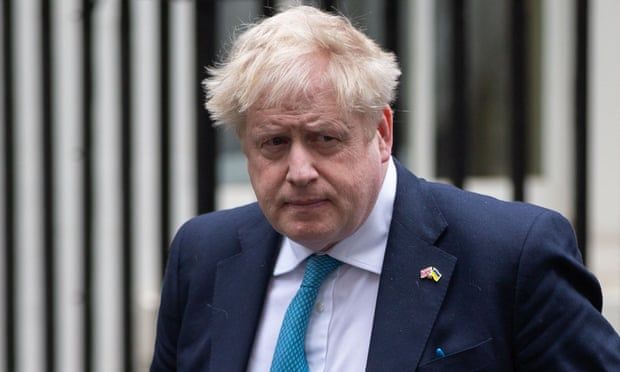 Boris Johnson has pledged to send more defensive equipment and $100m to Ukraine to hold off Russian troops and mitigate financial pressures facing the country, but was accused of moving too slowly and timidly to clamp down on oligarchs’ dirty money in the UK.
Emergency legislation is due to be rushed through the House of Commons on Monday, intended to create a register of

overseas ownership of UK land and property, reform unexplained wealth orders and make it easier to prosecute those involved in breaking sanctions.

The economic crime bill will be supported by opposition parties, but ministers were warned it would still give those suspected of money laundering a “get out of London free card” and contained loopholes that could let people disguise or liquidate their assets before the new powers come into effect.

Keir Starmer, the Labour leader, said he was frustrated ministers were “going slowly” and that there were “echoes of Afghanistan”, claiming the government “really only begins to get its act together and respond in the heat of the situation rather than preparing for it beforehand”.

Dominic Raab, the deputy prime minister, said on Sunday it could take months or even years for the Russian president, Vladimir Putin, to be defeated in his ambition to conquer Ukraine.

Raab said anyone who thought the crisis would be resolved in days was “deluding themselves” and that western nations would need to “show some strategic stamina”, even though Moscow’s military campaign had “stuttered”.

Johnson will host meetings in No 10 with Nato leaders – Canada’s Justin Trudeau and the Netherlands’ Mark Rutte – on Monday to keep up the international pressure on Russia to end its war on the edge of eastern Europe.

The prime minister said that since the invasion began nearly two weeks ago, the world had stood “tall in solidarity with the indomitable people of Ukraine”.

During a call with the Ukrainian president, Volodymyr Zelenskiy, Johnson also raised concern over “the increasing threat Russia’s barbaric attacks pose to Ukrainian civilians” and blamed Putin’s forces for breaching ceasefires relied upon for helping international aid reach those stuck without food, water and electricity for days.

In an effort to clamp down on the vast sums of Russian money opaquely invested in the UK, the home secretary, Priti Patel, vowed that the upcoming economic crime bill would “go after the oligarchs”.

The measures have been welcomed by many, given transparency campaigners have long complained that foreign investors have been able to hide their wealth in UK property, using shell companies and other complicated legal structures to conceal the identity of the real owners.

Under the plans expected to be passed in a single day by MPs, a new register will be created that will list the foreign owners of any property bought in the last 20 years, or since 2014 in Scotland.

Reform of the unexplained wealth orders system would also come into force, given no such order has been issued since the end of 2019. The changes will make it easier for authorities to confiscate criminal assets.

However, some policies have been held back for a second economic crime bill.

Jonathan Reynolds, Labour’s shadow business secretary, said the current plan to give oligarchs a six-month grace period to register their UK property would give “Putin’s cronies months to sell up and escape sanctions”.

He called for the window to be cut to 28 days and said the Conservatives were in effect giving allies of the Russian president a “get out of London free card”.

The London mayor, Sadiq Khan, said there was at least £1.1bn of property in the capital linked to the Kremlin, along with millions of pounds’ worth of goods such as art, cars and boats.

He targeted the planned 30-day “wind-down period” for companies to conclude business arrangements before sanctions come into effect, adding that it was “completely unacceptable that ministers are offering them such easy loopholes to disguise or liquidate their assets before the state can act”.

Meanwhile, Tory and Labour backbenchers have swung behind an amendment tabled by the Liberal Democrats. MP Layla Moran said it was “farcical” that another loophole existed allowing the government to grant exemptions to individuals that would otherwise feature on the register of beneficial ownership for overseas entities if it is “in the interests of the economic wellbeing of the UK”.

Cross-party support has also been secured by ex-ministers David Davis, the Tory former Brexit secretary, and Liam Byrne, Labour’s former chief secretary to the Treasury, for an amendment to clamp down on so-called “lawfare”.

The pair want to stop oligarchs using the English court system to silence their critics, including journalists uncovering their business dealings. The Guardian revealed last week that the foreign secretary, Liz Truss, was pushing for a swift overhaul of the powers, but Raab has only committed to opening a call for evidence on reforming them in weeks.