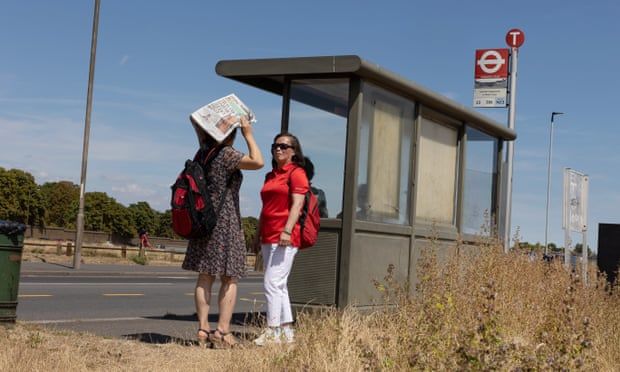 Boris Johnson was accused on Saturday of being “missing in action” after failing to attend a Cobra meeting to discuss the national heatwave emergency following predictions that thousands could die in the coming days.

As the threat to life from the impending heatwave continues to crystallise, the prime minister chose to skip the meeting on Saturday. He instead stayed at his Chequers country retreat, where he is due to hold a thank you party for supporters on Sunday.

Britain is bracing itself for record temperatures, potentially as high as 40C on Monday. The threat has already prompted some school closures, warnings of a “nightmare” in the NHS and instructions for rail passengers not to travel unless absolutely essential. 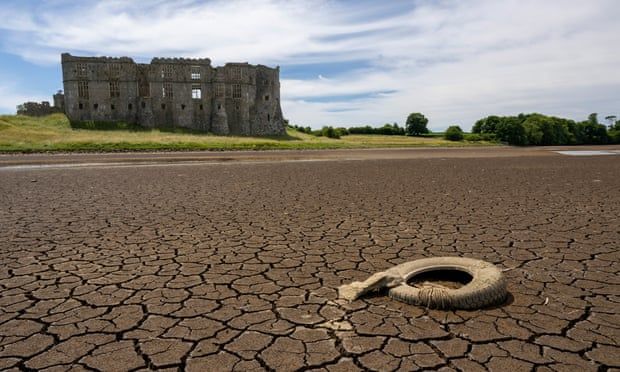 An old tyre is exposed at low tide in the River Carew, Pembrokeshire.

“The public will have no confidence in this zombie Conservative government responding swiftly and decisively to this national emergency as this disgraced prime minister prepares to party while Britain boils,” she said.

Downing Street insiders said it was not unusual for senior ministers other than the prime minister to chair a Cobra meeting.

The government has been accused of being slow to offer advice on coping with the heat. After the Cobra meeting, Malthouse said: “If people don’t have to travel, this may be a moment to work from home.”

But the working from home revolution is more likely to go into reverse – temporarily at least – with workers heading into air-conditioned offices.

Mark Dixon, founder of IWG, a flexible workspace provider, said it had been particularly busy in the southeast of England. “We have seen an increase in inquiries over the past week, and suspect the warm weather is playing a role,” he said.

Network Rail is advising passengers to use services only if “absolutely necessary”, and Londoners have been urged against travelling on Monday and Tuesday.

Transport staff in the capital spent yesterday inspecting air-conditioning units on the underground network and air cooling units on double-decker buses to ensure they are functioning. In Hampshire, gritters have been spreading sand on roads to avoid damage from heavy vehicles as asphalt begins to melt. Malthouse confirmed that transport services face “significant disruption”. 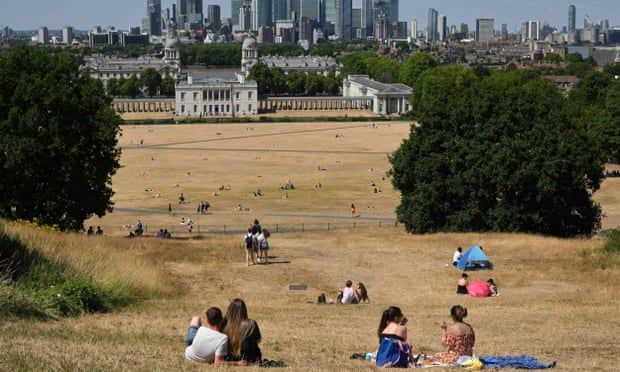 Health experts also cautioned that older hospitals may become uncomfortably hot. Dr Claire Bronze, an A&E consultant in London, said: “We’re worried about how [the heat] is going to affect patients and staff. Many building are without air conditioning or windows that open - so they are extremely hot.”

These warnings were echoed by James Bowen, director of policy for the National Association of Headteachers, who pressed the government to improve the condition of school buildings. “As we have learned during the pandemic, too many are simply not fit for purpose, with even basic ventilation being a challenge in some cases,” he said.”

Some schools will be closed altogether on Monday and Tuesday while others have shortened their day or asked parents to send children to classes in PE kits or other cool clothing. Other schools have opted to cancel events such as sports days.

As wildfires tore across huge swathes of southern Europe, UK fire chiefs warned that similar scenes in England and Wales were “almost inevitable” with new data revealing that the number of outbreaks has already reached record levels.

More than 350 wildfires have been reported in the UK so far this year, eclipsing in less than six months last year’s previous record high of 247.

The National Fire Chiefs Council (NFCC) said that people living on the edge of towns, near farmers’ fields, are at greatest risk of wildfires, and that the tinder-dry landscapes of the UK’s national parks may also put people at risk.

Paul Hedley, the NFCC’s national lead on wildfires and chief fire officer for Northumberland, said firefighters around England and Wales were being mobilised.

“Services are standing up: they’re preparing to respond, but I think it’s almost inevitable that we will see more large wildfires within the next five or six days,” Hedley told the Observer.

Yesterday, police reported a series of wildfires on moorland near Manchester, which they believe were started deliberately.

Many wildfires are sparked by disposable barbecues, campfires or candles in airborne sky lanterns. Some national parks have issued public spaces protection orders, effectively banning the use of disposable barbecues, which can get so hot that, even without a spark, they can ignite fires in peat-rich ground.