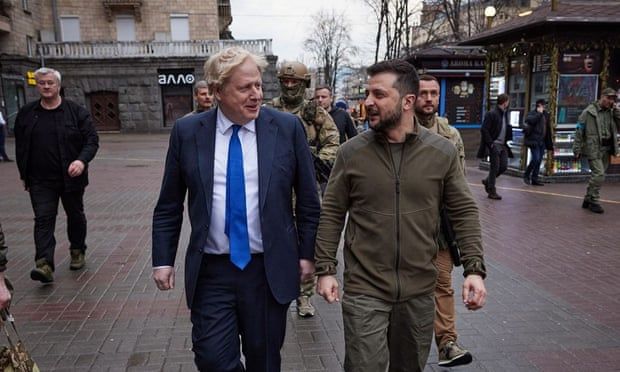 Analysis: the Ukraine invasion came at an opportune moment for the PM, though the damage of Partygate lingers on

Boris Johnson had been in a running argument with his security detail about the feasibility of a visit to Kyiv for weeks, and on Saturday he finally won his battle.

It was more than a fortnight after the prime ministers of Slovenia, the Czech Republic and Poland took the train to Kyiv on 15 March, at a time when the capital was under greater assault from Russia; a week after the president of the European parliament, Roberta Metsola, spoke to the Ukrainian parliament; and a day after the commission president, Ursula von der Leyen, and her foreign affairs chief, Josep Borrell, stood horrified in Bucha. Borrell, clearly moved by the Ukrainian president Volodymyr Zelenskiy’s bravery, said he had returned with a clear to-do list.

But Johnson is the most high profile national leader to have visited since the war began, and if his walkabout in the capital had a heavily stage-managed air, he will have embedded his reputation with Zelenskiy as his greatest military ally.

His visit was ecstatically received in Ukraine. In his latest video address Zelenskiy heaped praise on the prime minister, whom he referred to warmly as Boris. “It was a great honour for me to welcome in our capital a sincere friend of Ukraine, Boris Johnson. His visit to our country demonstrates as clearly as possible there are no obstacles to freedom and to leadership,” Zelenskiy said.

Speaking to Ukrainians, he added: “Boris was among those who did not hesitate for a moment whether to help Ukraine.”

He said the UK’s assistance in terms of the tangible supply of defensive weapons and sanctions policy against Moscow “will remain forever in history”. “Ukraine will always be grateful to Boris and Britain for this,” he declared. He described London as the leader of what he called the “antiwar coalition” that was trying to force Russia to end its invasion and to seek peace.

A video of the Johnson-Zelenskiy walkabout in Kyiv on Saturday, posted by Ukraine’s defence ministry, clocked up an impressive 6.1m views. The respected defence correspondent of the Kyiv independent newspaper, Illia Ponomarenko, was enthralled by the footage. He described it on Twitter as “one of the greatest videos the internet has ever seen”.

In practical terms the visit could probably achieve little that the two men’s near daily phone calls on a secure line cannot, but the symbolism of the visit is hard to surpass. It serves a useful dual purpose. It normalises Kyiv and makes Johnson a little more extraordinary.

Britain has been the country most hostile to Russia for years, and well before the invasion it had developed a close military partnership with Ukraine. So Britain’s role in the past five week as Ukraine’s closest military ally is hardly a surprise. France and Germany as the guarantors of the Minsk accords were more deeply embedded in the diplomacy around Ukraine’s future, and Germany is only now emerging from its long, complex relationship with Russia and militarism.

That left a space vacant for the UK to adopt the post of the unambiguous military ally, chairing the ad hoc meetings on the supply of arms to Ukraine, a role Nato has not been able to fulfil. But Johnson at the outset was clear-minded about the gravity of what was at stake. In his largely self-penned speech on 15 February to the Munich security conference, he said explicitly that Vladimir Putin had to be seen to fail, and that if Zelenskiy was toppled it would be the west’s duty to arm the resistance.

It is true the war could not have come at a more opportune moment for the prime minister. If Cressida Dick, the Metropolitan police commissioner, had not belatedly intervened on 25 January in the Downing Street Partygate affair the full report commissioned by Downing Street from Sue Gray would have been published in late January, the number of letters from Tory MPs demanding Johnson’s resignation might well have gone past the trigger point, and Johnson might have been forced to resign, leaving him as caretaker prime minister at the point that Russian tanks started trundling over the Ukrainian border.

In practice, democracies can choose leaders and fight surrogate wars at the same time – in recent months there have been scheduled elections in France, Hungary, Malta and Portugal. But there is no appetite among Tory MPs, even if the prime minister is given a fixed-penalty notice for a breach of Covid regulations, to trigger a leadership election.

That does not mean Johnson can shape this into a Falklands moment. No British troops are directly involved, and this is not going to end with the union jack being hoisted above the Kremlin. The polls so far seem to have retained the turn against the Conservatives that started with Partygate.

But wars change perceptions and perspectives. It is still possible for Johnson to emerge as a more serious figure from this.

But even then the cheers of liberated people abroad can be dangerously alluring – and ephemeral. David Cameron stood alongside Nicolas Sarkozy to receive a rapturous reception from the people of Benghazi in Libya in 2011. Tony Blair was hailed by the people of Kosovo in 1999. Streets are named after John Major in Kurdistan. Winston Churchill saved Britain from Nazism. Much good it did them at the polls in the years that were to follow.