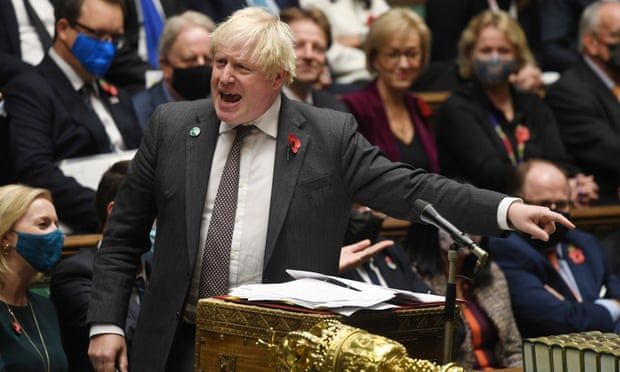 Boris Johnson tore up the independent system for combating sleaze in parliament on Wednesday as he threw the government’s weight behind protecting a Conservative MP who was found to have repeatedly breached lobbying rules.

The Labour leader, Sir Keir Starmer, accused the prime minister of corruption after Johnson whipped his MPs to halt Owen Paterson’s parliamentary suspension and demand a review of the entire standards process to allow for appeals.

Scores of Tory MPs declined to back the prime minister, however, with several saying they had been deluged by angry messages from constituents.

One Tory, Angela Richardson, MP for Guildford since 2019 and an aide to Michael Gove, confirmed she had departed from her role as a parliamentary aide after her decision to abstain. She tweeted: “I abstained … aware that my job was at risk, but it was a matter of principle for me.”

It comes as Johnson is himself facing what would be a fourth inquiry by Kathryn Stone – the parliamentary standards commissioner who recommended Paterson be suspended for 30 days for breaking lobbying rules – into the funding of his Downing Street flat refurbishment.

On a day of extraordinary drama in Westminster MPs voted by 250 to 232 to support a government-backed amendment to set aside the ruling against Paterson and overhaul the independent disciplinary system on Wednesday, which the prime minister claimed was a matter of “natural justice”.

The government’s majority was reduced from 79 to just 18, however, underlining the unhappiness of many Conservatives. The vote result was met with cries of “shame” from opposition MPs.

After the vote, Paterson, who previously suggested the investigation into his conduct contributed to the death of his wife, Rose, said: “After two years of hell I now have the opportunity to clear my name.” He had previously protested his innocence to the commissioner.

Stone said via her spokesperson that she intended to remain in post until the end of her term in December 2022.

In his most strongly-worded criticism of the prime minister to date, Starmer said protecting Paterson, and failing to throw out the Conservative MP Rob Roberts who was found to have harassed an aide, was corrupt.

“I am sick of people skirting around calling this out for what it is: corruption. Paterson was receiving money from a private company to ask questions on its behalf. Roberts was found to have made repeated and unwanted sexual advances toward a young staffer. Both of them should be gone – neither are fit to serve as MPs,” Starmer wrote in the Guardian.

Following revelations in a 2019 Guardian investigation, Stone launched an investigation and found that Paterson repeatedly approached ministers and officials on behalf of two companies that were paying him more than £100,000.

Stone is expected to make a decision shortly about whether to investigate the funding of the refurbishment of Johnson’s Downing Street flat, which was initially paid for by a Tory donor.

Writing to the Labour MP Margaret Hodge this year, Stone said: “I will await the outcome of the Electoral Commission’s inquiry before making any decision.” It is understood the commission has now completed its investigation and shown a first draft of its findings to Conservative campaign headquarters.

Stone previously found against Johnson over his use of a holiday villa on the Caribbean island of Mustique funded by the Carphone Warehouse founder David Ross – though that ruling was subsequently overturned by the parliamentary commission for standards.

Opposition parties accused the Tories of seeking to undermine Stone, and urged her to investigate the funding of Johnson’s costly redecoration project.

The Liberal Democrat chief whip, Wendy Chamberlain, said: “This looks like a clear attempt to weaken independent scrutiny ahead of investigations into other damaging Tory sleaze scandals, from dodgy Covid contracts to the refurbishment of Boris Johnson’s flat. The Conservatives are trying to make parliament’s watchdog toothless so it can no longer properly hold them to account.”

The deputy Labour leader, Angela Rayner, said: “If the prime minister has nothing to hide then he should be pleased to be investigated by the parliamentary commissioner instead of abolishing and overriding this independent regulator and replacing it with a committee with a Tory majority that will just do the prime minister’s bidding for him.”

Johnson’s spokesperson insisted his stance reflected “longstanding concerns” about the lack of a right to appeal in the current system – though the chair of the parliamentary committee on standards, Chris Bryant, told MPs that Paterson had been given ample opportunity to make his case.

Bryant was heard in silence as he told MPs: “It is by definition wrong to change the process at the very last moment.” Warning Paterson that “his name will become a byword for bad behaviour”, he said the former minister had “repeatedly, over a sustained period, lobbied officials and ministers on behalf of paying clients … that is expressly forbidden, it is a corrupt practice”. 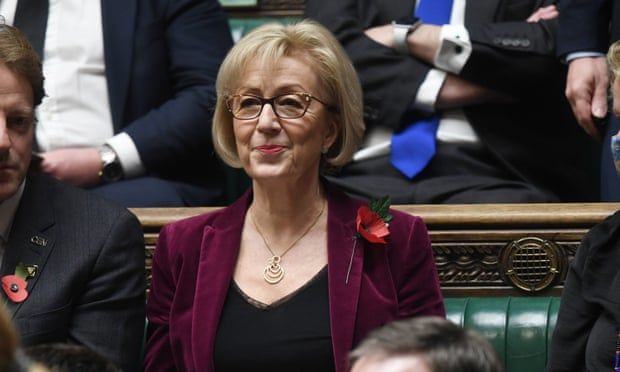 Andrea Leadsom, seen in the House of Commons on Wednesday, tabled the call for a new standards committee.

The controversial amendment, tabled by the former cabinet minister Andrea Leadsom, called for the creation of a new committee chaired by the Tory MP John Whittingdale, with five Conservative and four opposition MPs. The intention is to review Paterson’s case and recommend reforms to the parliamentary standards system.

Labour and the Scottish National party said they would boycott the new body. A minister said the whips’ “cunning plan … didn’t survive its encounter with reality” and that Paterson’s fate should have been separated out from wider reform of the standards system.

A second Tory MP hit out at “very poor party management” and claimed “certain people bullied some into submission on behalf of an old friend”. A third called the ploy “politically insane”, adding: “The fact that even if the process was perfect [Paterson’s] mates would claim it was broken to try to get him off is disgusting.”

One told the Guardian their inbox had been in “meltdown” and added: “I know the usual suspects – the messages I’m getting aren’t from them.”

Thirteen Conservative MPs voted against the government, including the former chief whip Mark Harper, and the backbencher Nigel Mills, who told the BBC: “The committee the government have chosen is completely unacceptable. There’s been no consultation, it was done at the last minute, it’s in the government’s control. That’s not a way of having a confident, impartial, standards process that anyone can have confidence in.”

At least a dozen frontbenchers abstained. One cabinet minister was said to be “spitting feathers” that she had to support the amendment while other colleagues were given permission to skip the tight vote.

Whittingdale told the Guardian he was considering how the committee would be able to operate and admitted it might “prove challenging”. But he said he would press ahead with forming it as the Commons had “passed a motion that clearly needs to be acted on”.