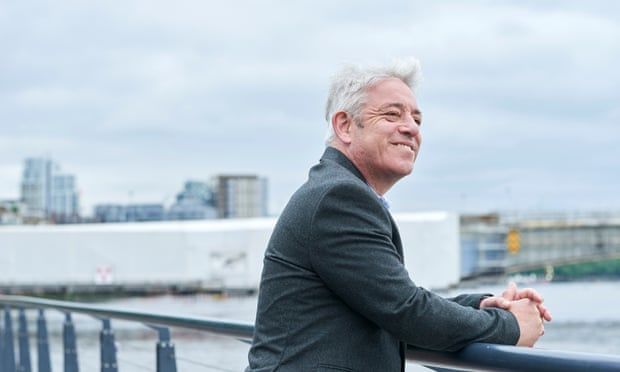 John Bercow defects to Labour with withering attack on Johnson

Former Speaker joined the Conservatives aged 17 but says party has become reactionary and xenophobic under its current leadership
John Bercow, the former Tory MP and Speaker of the House of Commons, has delivered an extraordinary broadside against Boris Johnson and the Conservative party as he announces he has switched his political allegiance to Labour.

In an explosive interview with the Observer, Bercow says he regards today’s Conservative party as “reactionary, populist, nationalistic and sometimes even xenophobic”.

Bercow, who stepped down as Speaker in 2019 after 10 years, says he joined the Labour party a few weeks ago because he now shares its values and sees it as the only means to removing the current Tory government from office.

“I am motivated by support for equality, social justice and internationalism. That is the Labour brand,” he said. “The conclusion I have reached is that this government needs to be replaced. The reality is that the Labour party is the only vehicle that can achieve that objective. There is no other credible option.”

Bercow says that despite Johnson’s professed commitment to “levelling up”, he has no interest in those less privileged than himself. He also describes as “utterly shameful” the government’s decision to cut international aid.

‘‘He is a successful campaigner but a lousy governor,” he said. “I don’t think he has any vision of a more equitable society, any thirst for social mobility or any passion to better the lot of people less fortunate than he is. I think increasingly people are sick of lies, sick of empty slogans, sick of a failure to deliver.’’

While Downing Street is likely to dismiss Bercow’s comments as those of an embittered remainer out for revenge because he has not been offered a peerage, as is customary for a retired Speaker, the news caps one of the most difficult weeks of Johnson’s premiership to date.

It is also marks the latest stage in an extraordinary political odyssey for Bercow, who joined the Tory party at 17 and describes himself as having once been a “rabid rightwinger”. By the early 2000s, Bercow had moved towards the more liberal, internationalist wing of the party. In 2009 when he became Speaker, convention dictated that he had to resign his party membership.

The Tories’ unexpected loss of the Chesham and Amersham parliamentary seat, where the Liberal Democrats overturned a majority of 16,000, has raised serious questions among Tory MPs and activists over whether Johnson can appeal both to working class voters behind the “red wall” and those in the more prosperous southern shires.

The result has already prompted signs of a U-turn in government over proposed changes in planning rules, which critics say would have reduced the right of people to appeal against development decisions. The issue was one of several that hit the Tory vote in Thursday’s byelection.

Referring to the byelection shock, Bercow said he believed many traditional Tories were dismayed by the Johnson government’s failure to match actions with words. He cited recent decisions to limit education catchup funding and to cut the international aid budget as examples of where its real priorities lay.

“I think what it [the byelection result] tells us is that there is very considerable distrust on the part of voters in the south of England of this government. I don’t accept the thesis that this was just an anti-HS2 vote. I think that is very convenient for the government, but it suffers from the disadvantage of being wrong. I think people in very large numbers are disappointed, in some cases disgusted, by what this government has done.”

Bercow, whose later period as Speaker was overshadowed by claims of bullying of staff, said he would not comment on “confidential” issues.

In his time as Speaker he grew increasingly controversial, and was detested by successive Tory prime ministers, who regarded his interventions over Brexit as self-aggrandising and verging on biased.

He reserved some of his most savage criticisms for the way the current government treats parliament, suggesting that he believes it consistently hides the truth from MPs.

Asked if he believed Labour could, under Keir Starmer, oust the Tories, Bercow was unsure. “The jury is out. I am, however, hopeful because I observed Keir Starmer at close quarters from the Speaker’s chair. He may not be Bill Clinton or Barack Obama but he is decent, honourable and intelligent and he came into politics as public service. I believe that Keir Starmer is motivated by an earnest and consuming desire to better the lot of the vast majority of the people of this country who do not enjoy the privileges that he does.”

Shadow justice minister Karl Turner said he was unsurprised his “friend” had joined Labour, but was “delighted that he has”.

John McDonnell, who was shadow chancellor under Jeremy Corbyn, said Bercow had been “scrupulously fair” in his treatment of MPs, including the former Labour leader.

“He won our respect, especially for his fight to protect the rights of parliament. I wholeheartedly welcome him into the Labour party,” McDonnell said.

On the Conservative side, however, pensions minister Guy Opperman said the situation was going “from bad to worse” for Starmer, adding: “Labour are welcome to Bercow.”

Bercow’s wife, Sally, has long been a member of the Labour party, and was once a Labour candidate for Westminster council.

In a sign of greater cooperation between the Liberal Democrats and Labour, the Lib Dem leader, Ed Davey, gave a broad hint that his voters should back Labour in next month’s Batley byelection. “Political parties campaign where they can win,” he told the Observer.

“Voters are far smarter than people give them credit for. Liberal Democrat voters may well notice that this is a Labour-held seat with the Tories in a close second, and they’ll draw their own conclusions. But that shouldn’t be stitched up in a back room by party leaders.”
#Boris Johnson
Add Comment