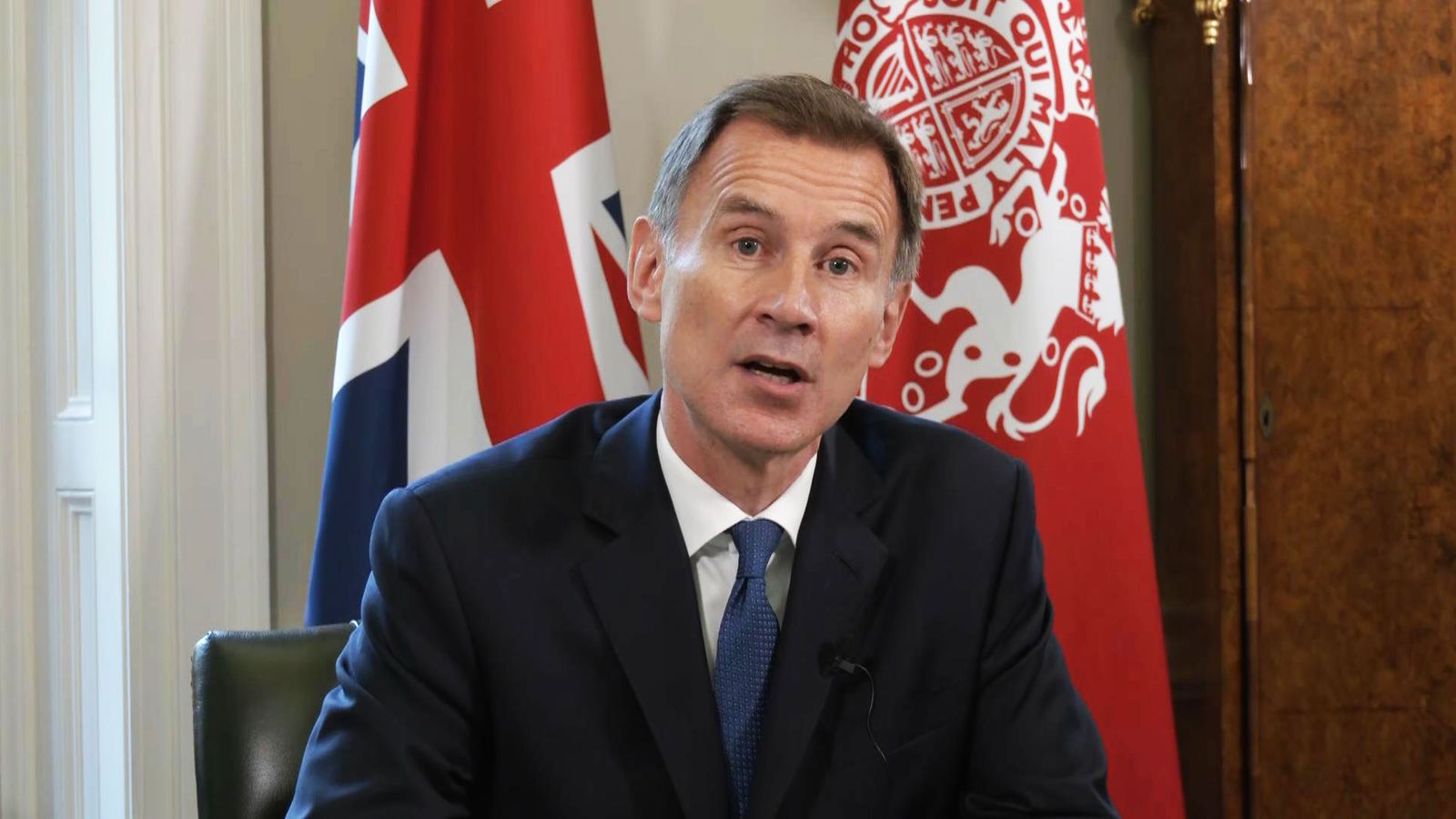 The new chancellor said he was making further changes to the mini-budget to "reduce unhelpful speculation" about what was happening with the government's growth plan ahead of the medium-term fiscal plan on Halloween.

Jeremy Hunt has revealed he is reversing "almost all" of the tax cuts announced in his predecessor's mini-budget and is scaling back support for energy bills.

In an emergency statement, the chancellor said a 1p cut to income tax will be delayed "indefinitely" until the UK's finances improve instead of being introduced in April 2023 as announced in Kwasi Kwarteng's mini-budget three weeks ago.

Mr Hunt, who only stepped into the job on Friday, said the government's energy price guarantee will only be universal until April - not for two years as originally planned.

After April, the scheme will be more targeted following a review into how to support people's energy bills from that time, he said.

"The government has today decided to make further changes to the mini-budget, and to reduce unhelpful speculation about what they are, we've decided to announce these ahead of the medium-term fiscal plan, which happens in two weeks," Mr Hunt said.

He said the government was reversing "almost all" the tax measures announced in the mini-budget that have not yet started going through parliament.

The Treasury said new tax measures would bring in £32bn after economists estimated the government was facing a £60bn black hole in public finances with the mini-budget announcements.

The changes Mr Hunt revealed include:

*  No cuts to dividend tax rates


*  No freeze on alcohol duty rates 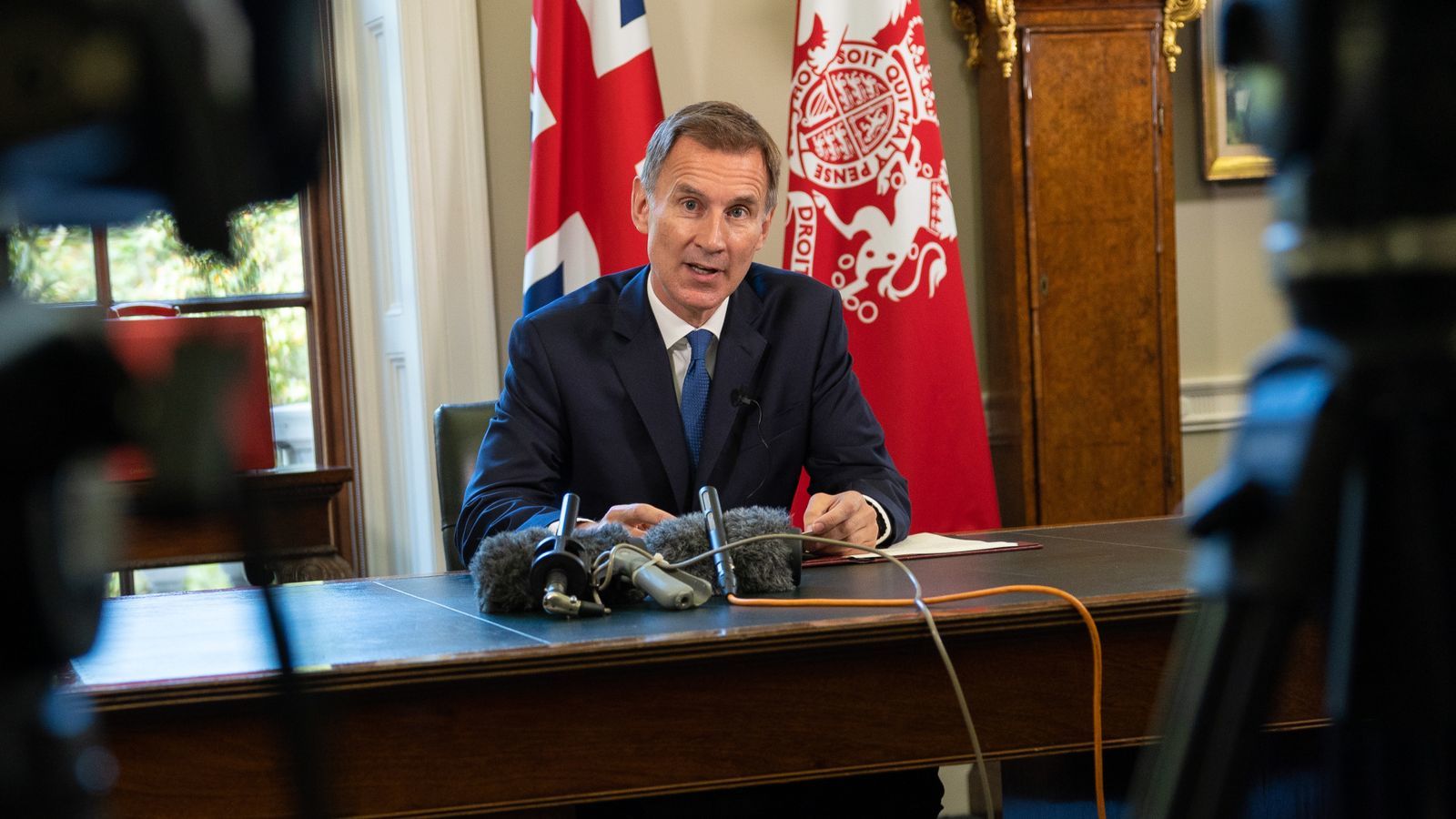 Mr Hunt promised: "The objective is to design a new approach that will cost the taxpayer significantly less than planned, whilst ensuring enough support for those in need.

"Any support for businesses will be targeted to those most affected, and the new approach will better incentivise energy efficiency.

"The most important objective for our country right now is stability."

As Mr Hunt revealed the tax cut reversals, the pound strengthened by more than 1.2% to 1.139 against the US dollar and UK government bonds rallied further, with yields on 30-year gilts easing back by around 10%.

Widely seen as the most powerful person in government now, Mr Hunt added that there will be "more difficult decisions" on tax and spending" and said all government departments "will need to redouble their efforts to find savings, and some areas of spending will need to be cut". 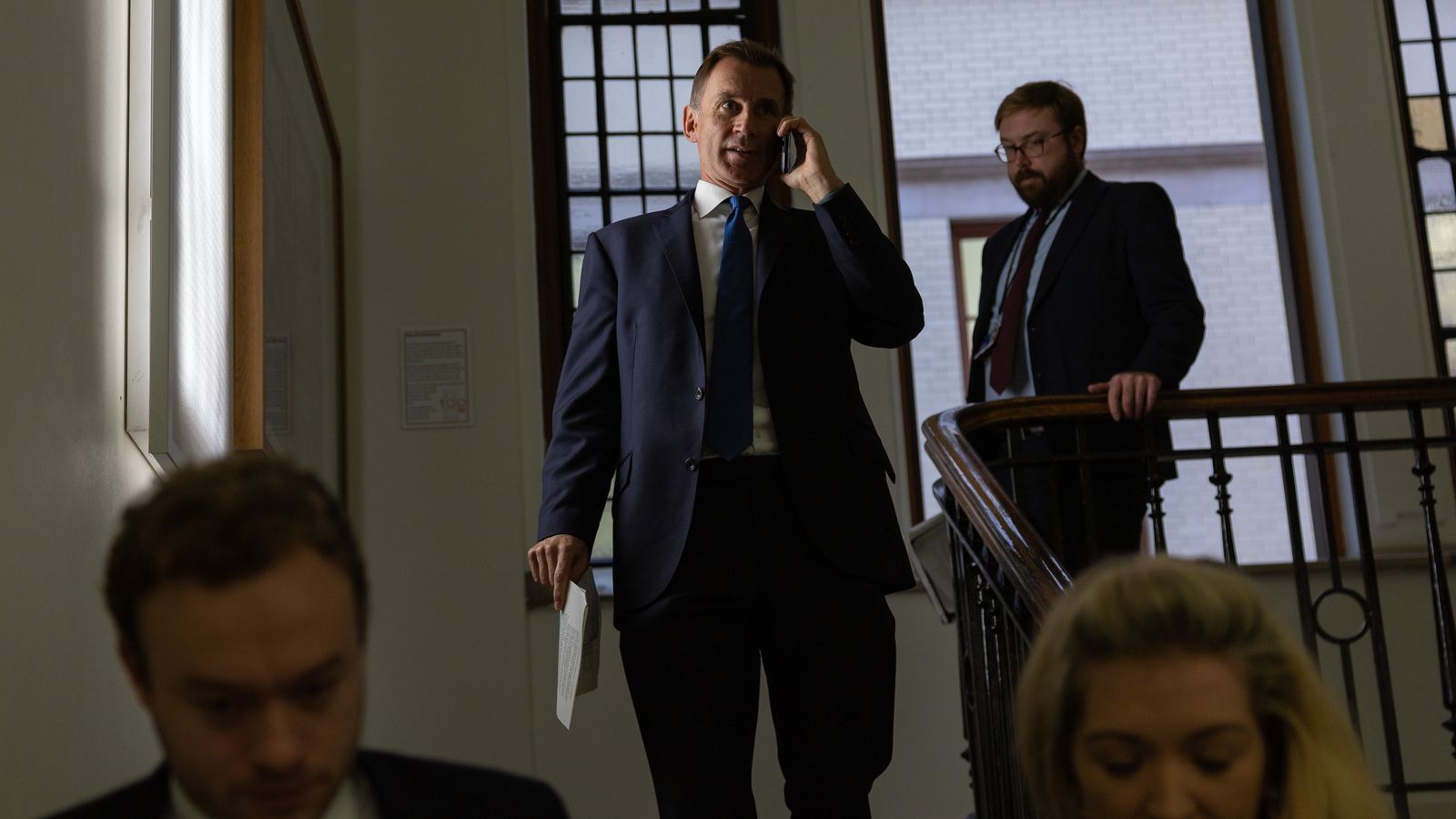 The mini-budget tax cuts that will not be reversed, as they are already going through parliament, are: reversing the increase in national insurance contributions and the stamp duty cut.

Ms Truss' spokesman said Monday's decision was taken jointly by the PM and Mr Hunt over the weekend and again admitted the mini-budget went "too far, too fast".

But he sidestepped questions about whether Ms Truss would resign after another Tory, Angela Richardson, joined those who started publicly calling for her to go over the weekend.

Sky News' political editor Beth Rigby said this row back on the mini-budget is a major blow for Liz Truss, just six weeks into her premiership.

"The entire platform of the Truss administration is gone, is gone. It's done," she said.

"It's genuinely shocking in terms of how a prime minister and her cabinet got this so wrong and had to reverse in such a dramatic way."

"It's not just the tax decisions in the mini-budget that the new chancellor now says are just not viable.

"He's now saying that the policy platform, her big shock and awe announcement as it was billed in the run-up to that announcement is also just economic, not viable. And that is another body blow to the prime minister today."

Scottish First Minister Nicola Sturgeon used a news conference about Scottish independence shortly after Mr Hunt's statement to say the government turmoil is "a self-inflicted crisis for Liz Truss" and "is humiliating in quite an unprecedented way".

"I think the sooner this prime minister and this entire government departs office, the better that will be for everyone," she added.