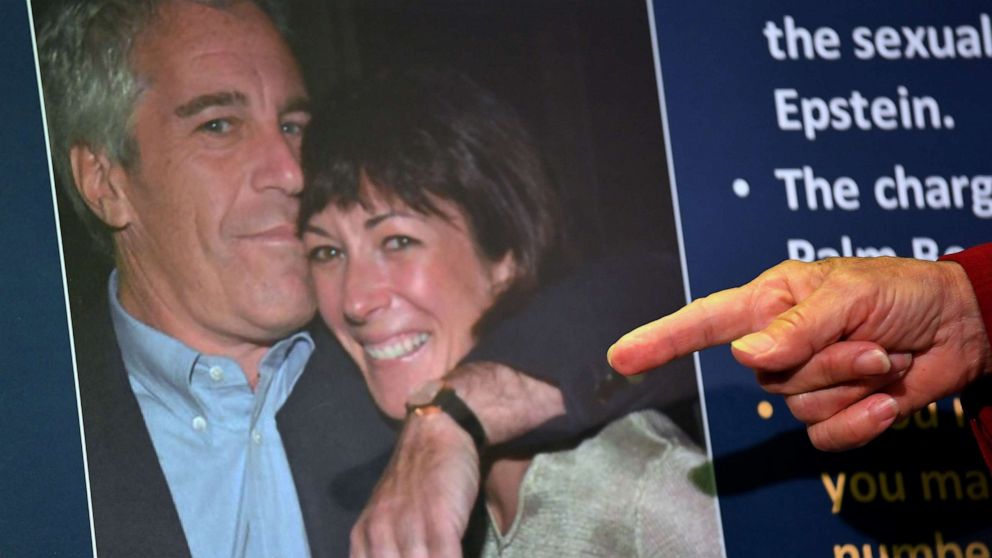 Attorneys delivered opening statements Monday in the much-anticipated criminal trial of Ghislaine Maxwell, the longtime associate of notorious serial sex offender Jeffrey Epstein. Maxwell faces a six-count indictment for allegedly conspiring with and aiding Epstein in his sexual abuse of underage girls between 1994 and 2004.

A jury of five men and seven women were empaneled earlier in the day, kicking off a legal drama that is expected to continue for at least six weeks.

"I want to tell you about a young girl named Jane," Assistant U.S. Attorney Lara Pomerantz told the jury.

Prosecutors have alleged that Maxwell played a "key role" in a multi-state sex trafficking scheme, in which she allegedly "befriended" and later "enticed and groomed multiple minor girls to engage in sex acts with Epstein" and was also, at times, "present for and involved" in the abuse herself. 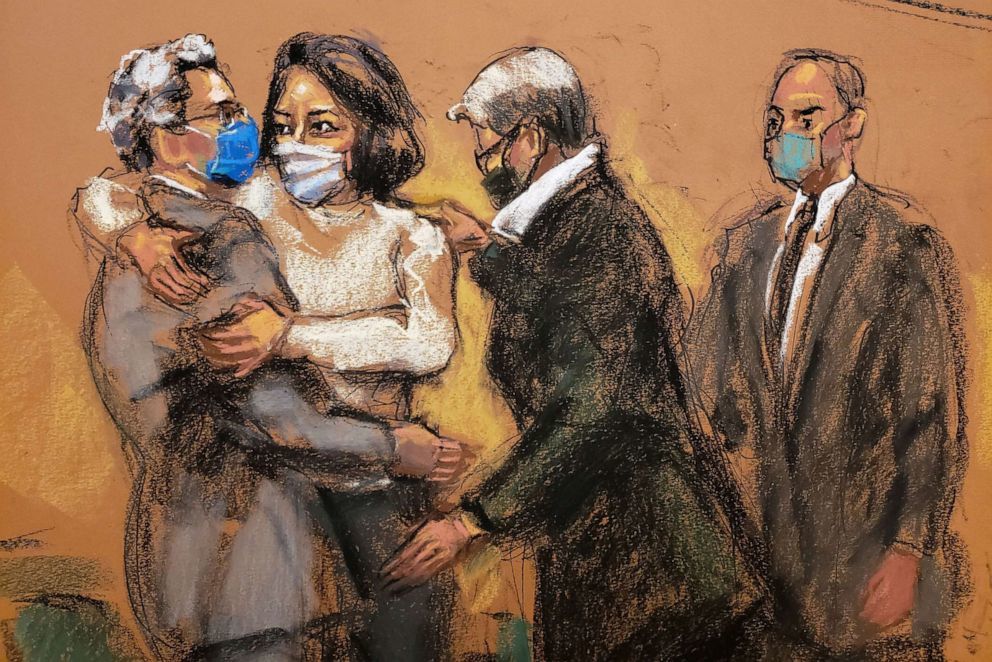 Ghislaine Maxwell embraces her defense lawyers after entering the courtroom for the start of her trial on charges of sex trafficking, in a courtroom sketch in New York City, Nov. 29, 2021.

"Jane," one of the three alleged minor victims who are expected to testify under pseudonyms at Maxwell’s trial, was just 14 years old when she reportedly met Maxwell and Epstein at a summer camp, Pomerantz said, the beginning of what she called "a nightmare that would last for years."

"This man and this woman were predators," Pomerantz said. "She knew what was going to happen to these girls. There were times when she was in the room when it happened."

Maxwell, who has been held without bail since her arrest in July 2020, has pleaded not guilty to the charges and proclaimed her innocence. On Monday, Maxwell’s defense attorney Bobbi Sternheim argued that her client is merely a "convenient stand-in" for the deceased Epstein, whom she cast as the true criminal.

"Jeffrey Epstein manipulated the world around him and the people around him, including Ghislaine," Sternheim said. "Ghislaine Maxwell is on trial because of her association with Jeffrey Epstein." 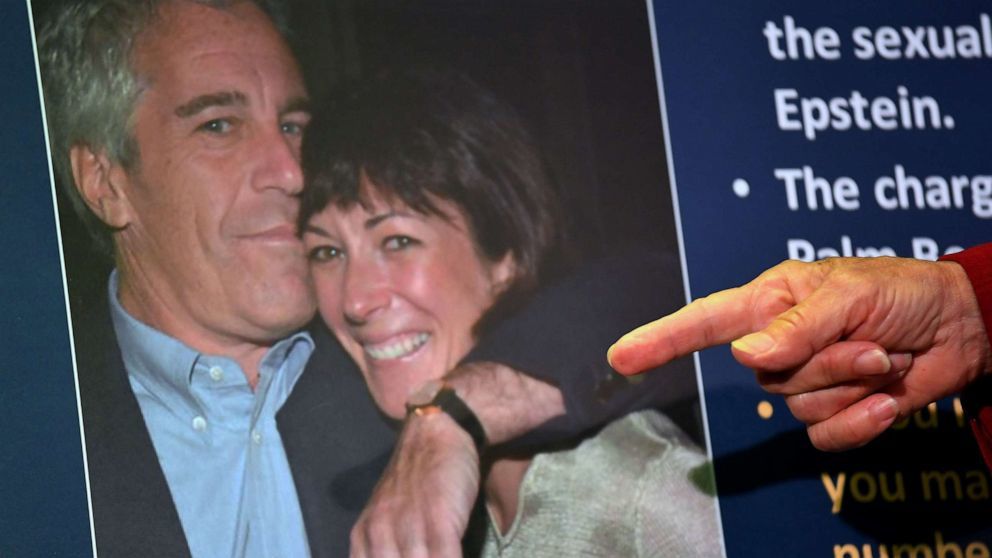 A photo of Ghislaine Maxwell and Jeffrey Epstein is displaced at a press conference announcing charges against Maxwell in New York, July 20, 2020.

Sternheim also sought to undermine the forthcoming testimony of the alleged minor victims in the indictment, calling their stories "thin" and suggesting that the accusers had been influenced by lawyers, media and money. "False memories can be created," she said, and each accuser has "shaken the money tree" of Epstein’s estate.

As the first day of the trial came to a close, the prosecution called its first witness, Epstein’s former pilot Larry Visoski, to take the stand.

Visoski talked about flight routes to St. Thomas and other locations associated with Epstein and characterized Maxwell’s relationship with Epstein as "couple-ish" before the court adjourned for the day.

Maxwell, 59, is the youngest daughter of Robert Maxwell, the notorious British publishing baron whose rags-to-riches story captivated England. Educated at Oxford, she lived an extravagant life among the British elite until her father's business empire collapsed in the wake of his death in 1991. She relocated to New York, looking for a fresh start, and was soon seen in the company of the enigmatic multimillionaire Epstein, a one-time math teacher turned investor who socialized with powerful politicians, celebrities and business leaders around the world.

The government’s case against Maxwell, however, is expected to sidestep some of the most headline-grabbing allegations involving Epstein and Maxwell. The pair’s most prominent public accuser, Virginia Roberts Giuffre -- who has repeatedly alleged that Epstein and Maxwell recruited her into a life of sexual servitude and directed her to have sex with prominent men -- is not anticipated to be a witness at the trial.

Federal prosecutors have indicated in pretrial court filings that they intend to tell jurors about the experiences of four women whose allegations are detailed in Maxwell’s indictment. Three of those women will be permitted by the court to testify under pseudonyms to protect their privacy. The fourth, Annie Farmer, has publicly identified herself as one of the alleged minor victims.

"As the facts set forth in this indictment make plain, the evidence in this case is strong," prosecutors wrote in a motion to detain Maxwell pending trial. "Multiple victims have provided detailed, credible and corroborated information against the defendant." 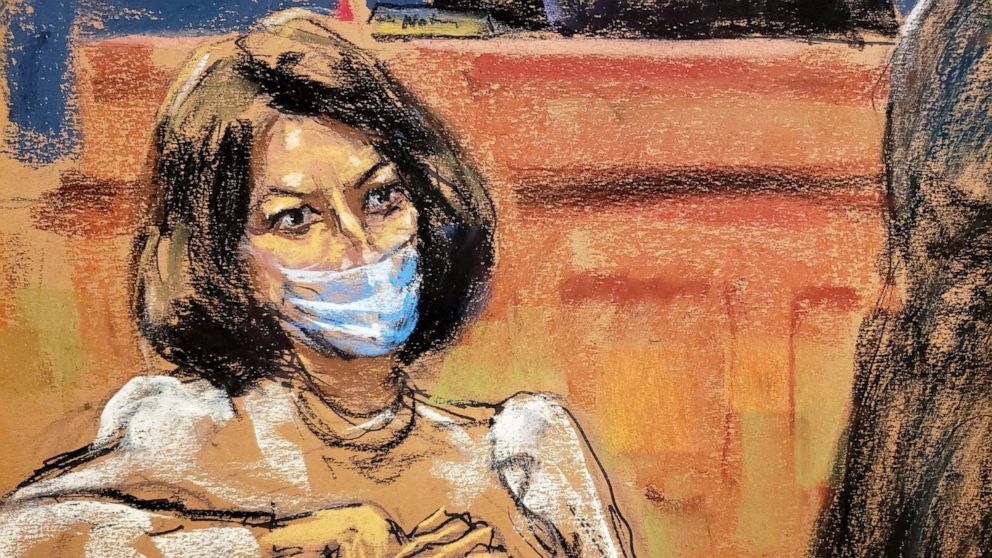 Ghislaine Maxwell listens as defense attorney Bobbi Sternheim gives her opening statement at the start of Maxwell's trial on charges of sex trafficking, in a courtroom sketch in New York, Nov. 29, 2021.

From the outset of the case, Maxwell’s legal team has assailed her prosecution as an attempt by the government to "substitute" Maxwell for Epstein.

In 2007, Epstein reached a controversial so-called "sweetheart deal" with federal prosecutors in Florida to avoid charges stemming from his alleged sexual abuse of more than 30 minor girls. He ultimately served just 13 months in a private wing of a county jail after pleading guilty to two prostitution-related charges in Florida state court. One month after being charged in a new indictment in New York in 2019, Epstein died by suicide while in federal custody at the now-shuttered Metropolitan Correctional Center in lower Manhattan.

"Ghislaine Maxwell is not Jeffrey Epstein," her attorneys wrote in court filings. "She was not named in the government’s indictment of Epstein in 2019, despite the fact that the government has been investigating this case for years. Instead, the current indictment is based on allegations that allegedly occurred roughly 25 years ago. Ms. Maxwell vigorously denies the charges, intends to fight them, and is entitled to the presumption of innocence."