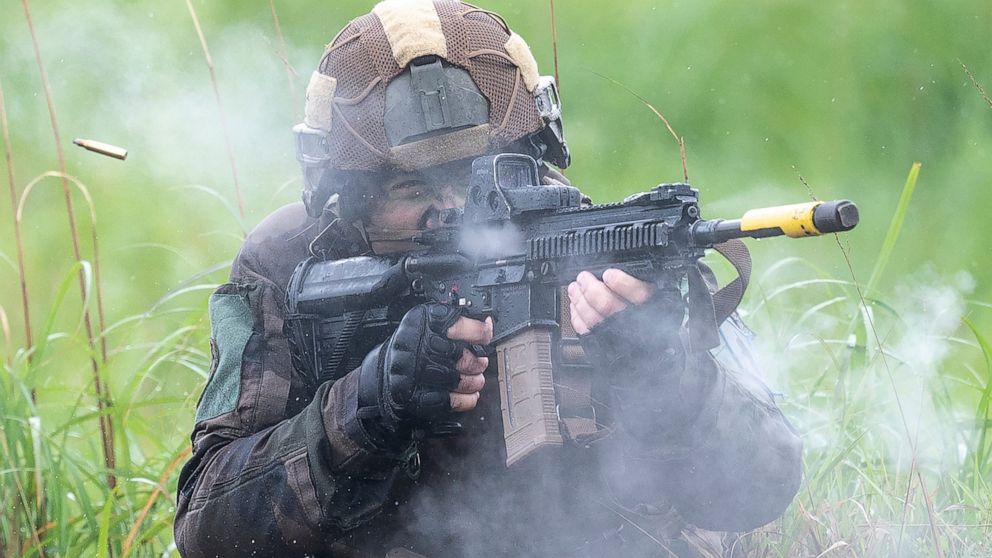 The three nations’ first joint drills on Japanese soil — dubbed “ARC21” and which began Tuesday — come as they seek step up military ties amid growing Chinese assertiveness in the region.

Japanese soldiers and their counterparts from the French army and the U.S. Marine Corps also conducted an urban warfare drill using a concrete building elsewhere at the Japanese Self-Defense Force’s Kirishima Training Area in the southern Miyazaki prefecture. Around 200 troops took part in Saturday's exercises.

On Saturday, the three countries were also joined by Australia in an expanded naval exercise involving 11 warships in the East China Sea, where tensions with China are rising around the island of Taiwan.

The drills come as Japan looks to bolster its military capabilities amid a deepening territorial row with China in regional seas. Japan is increasingly concerned about Chinese activity in and around Japanese-claimed waters surrounding the Japanese-controlled Senkaku islands, which Beijing also claims and calls Diaoyu.

Since the end of World War II, Japan’s constitution has limited the use of force to self defense. Japan in recent years has continued to expand its military role, capability and budget.

Japan's Vice Defense Minister Yasuhide Nakayama, who observed the exercise, stressed the significance of French participation in the joint exercises regularly held between Japan and the U.S., and often with Australia.

“It was a valuable opportunity for the Japanese Self-Defense Force to maintain and strengthen its strategic capability necessary to defend our remote islands,” Nakayama said. “Together we were able to show to the rest of the world our commitment in defending Japanese land, territorial seas and airspace.”

France, which has territories in the Indian Ocean and the South Pacific, has strategic interests in the region.

"It is obviously very important for us because we need to be side by side with people who are sharing this part of the world,” Lt. Col. Henri Marcaillou from the French army told reporters after Saturday's exercise.

U.S. Marine Corps Lt. Col. Jeremy Nelson said the three countries showed they can work together “for a common goal or common cause.”

Britain, which recently adopted a policy of deeper engagement in the region, is sending the aircraft carrier Queen Elizabeth and its strike group, due to arrive in the region later this year. Germany is also set to deploy a frigate to the region.

Japan and the U.S. have been promoting a free and open Indo-Pacific vision of defense and economic framework based on democratic principles in the area in a group known as the Quad, which also includes Australia and India, seen as a move to counter China's escalating influence in the region.

China has criticized the U.S.-Japanese framework as an exclusionist bloc based on a Cold War-era mindset.
Add Comment