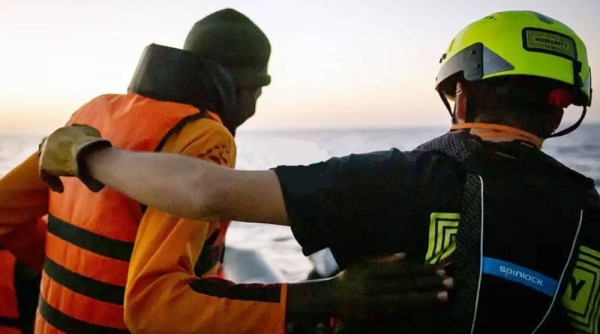 Humanitarian groups caring for nearly 1,000 rescued migrants on three ships in the central Mediterranean are sounding an alarm about deteriorating conditions, but Italy’s new far-right-led government has not responded to requests for a safe port as it hardens its position against rescue boats.
The country’s new interior minister, Matteo Piantedosi, has set the groundwork to ban humanitarian ships from Italian ports while appealing to countries whose flags the rescue ships fly to relieve the burden on Italy by accepting the rescued passengers.

The moves are reminiscent of the anti-NGO posture taken by League party leader Matteo Salvini, now the deputy premier, who prevented humanitarian ships from accessing Italy’s ports when he was interior minister from 2018-19.

So far, Italy, along with Malta, has remained silent in response to requests for a safe port from the three ships: the Doctors without Borders-operated Geo Barents, which has 572 people on board; SOS Mediteranee’s Ocean Viking, with 234 people on board, and the SOS Humanity’s Humanity 1 with 179. All were rescued over a weeklong period beginning Oct. 22.

While Italy is de facto blocking the humanitarian ships from disembarking the 1,000 people, Interior Ministry figures indicate that Italian authorities brought 6,383 others to the country’s shores over the last week.

The crew of the Geo Barents is struggling to accommodate the migrants picked up in seven operations starting Oct. 22. They include more than 60 unaccompanied minors, yet more families with children and pregnant women, as well as the elderly. Many are sleeping on the floors, and supplies were running low.

“We are here on board with 572 people, some of them have been with us already for 6 days,’’ said Caroline Willemen, MSF Coordinator on the Geo Barents. “As you can see, the situation here on the deck is extremely overcrowded. People do not have space to move. The MSF team we are doing everything we can to take care of them.

“It is absolutely necessary that they can disembark as soon as possible in a place of safety,’’ she said. The rescued migrants were struggling with the crowded conditions and the uncertainty.

“We don’t have enough space to sleep. We are sleeping down on the floor and it’s very cold at the morning and at night,’’ said Khaled Mahmoud Mansour, a Palestinian. “Actually the situation is becoming day after day more difficult.”

After failing to get a response from either Italy or Malta, SOS Mediteranee also issued requests for safe ports to Greece, Spain and France. “The 234 rescued people on board must be disembarked urgently,’’ the group said. “The current blockade at sea of 985 persons is illegal and inhuman.”

The maritime rescue group urged EU member nations to come up with a “predictable system of disembarkation to ease the pressure on European coastal states,’’ saying people rescued at sea “must no longer be traded into political debates.”

European Commission spokeswoman Anitta Hipper said the commission is aware of the 3 ships with around 1,000 people seeking safe disembarkation, but emphasized that it does not coordinate operations at sea or landings.

“Saving lives at sea is a moral duty as well as a legal obligation for member states under international law, independently from circumstances which have led people to the distress at sea,” Hipper told reporters.

Piantedosi signed a directive last week that can be used to once again prevent humanitarian groups to access Italy’s port, and has asked the countries whose flag they are flying to take on the migrants.

“We cannot take on migrants picked up at sea by foreign ships that are systematically operating without any coordination by authorities,’’ Piantedosi told the Corriere della Sera newspaper this week.

“Since we are taking on 84% of the migrants arriving on our coast, saved by us, we hope that the much-ballyhooed European solidarity will be realized,” he said.

Italy and Germany have traded communications regarding the German-flagged Humanity 1 ship but no agreement was reached. The German Foreign Ministry said it asked Italy to help quickly, but did not provide further details
Add Comment