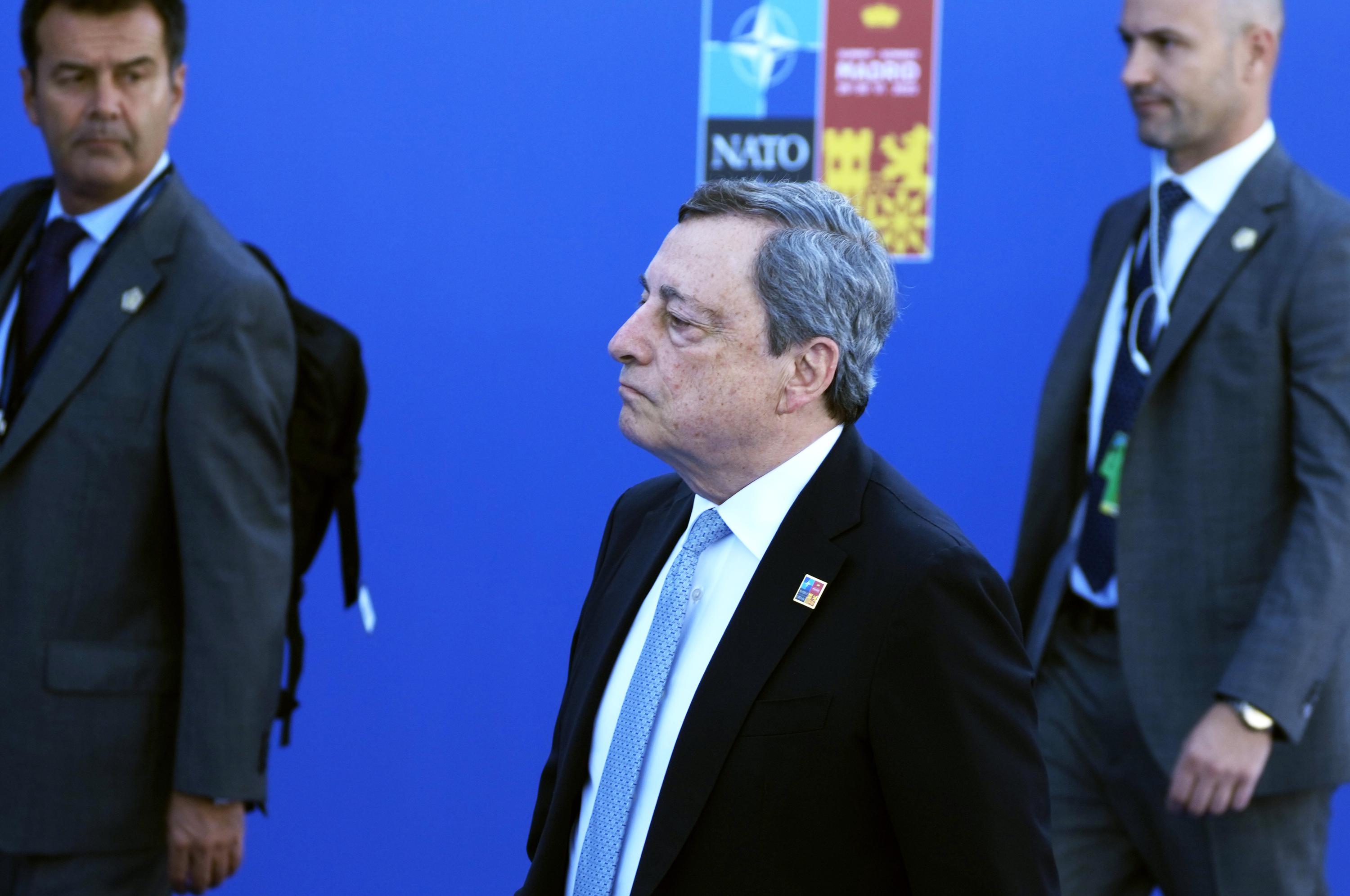 Italian Prime Minister Mario Draghi’s offer to resign has sent unsettling ripples through financial markets, bringing back bad memories of Europe’s debt crisis a decade ago and complicating the European Central Bank’s job as it raises interest rates for the first time in 11 years to combat record inflation.
Draghi, a former ECB president, has pushed policies meant to keep Italy’s high levels of debt manageable and boost growth in Europe’s third-largest economy. He suggested Wednesday that he was open to staying in power, but the threat of political changes as borrowing costs increase have raised concerns that the 19-country eurozone could head into another crisis.

It’s a headache for the ECB as it seeks to return interest rates from sub-zero to more normal levels starting Thursday — without setting off bond-market chaos in a country with debt at 150% of economic output. The ECB has said it will raise rates a quarter-percentage point, though some analysts aren’t ruling out a half-point increase.

The Frankfurt-based ECB will join the U.S. Federal Reserve, Bank of England and other central banks worldwide that have already raised rates several times to tame runaway inflation. But the ECB doesn’t want jittery markets sending up the borrowing costs of some euro member countries beyond what’s justified by their economic strength.

The bank’s task is already hard enough with predictions growing of a recession next year due to exorbitant oil and natural gas prices fueled by the war in Ukraine.

So along with the rate increase, ECB President Christine Lagarde is expected to announce a financial backstop aimed at capping borrowing costs for governments and companies in eurozone countries that are less financially solid than the others.

It’s a hassle unique to the ECB because it oversees 19 countries that are in different financial shape but use one currency, which has plunged to its lowest level against the dollar in 20 years.

“The Fed and the Bank of England don’t have this problem,” said Maria Demertzis, interim director of the Bruegel think tank in Brussels. “The borrowing costs for each country when they issue debt is different, because the underlying outlook is different.”

The vicious circle was broken by Draghi pledging as ECB chief to “do whatever it takes” to preserve the euro, followed with a promise that the bank would buy the bonds of countries facing excessive borrowing costs if needed. That backstop calmed the market so well that it never had to be used. But it came with tough conditions that might make it unappealing to governments.

The ECB’s new backstop will have conditions but probably less onerous ones. It would consist of a promise to buy an indebted country’s bonds, which drives down borrowing costs if market interest rates rise to unjustified levels.

Italian 10-year bonds now yield 3.4%, about 2.2% higher than their German equivalent. Italy’s borrowing costs are not excessive at that level, but the idea is to keep them that way because market sentiment can turn suddenly.

Demertzis said that as interest rates go up, they’re transmitted differently to the borrowing costs of each country.

“So now that we are in the part of the interest rate cycle where rates are going to have to go up, the problem is that borrowing costs will accelerate for Italy and will not accelerate for Germany,” she said.

If Italy can’t borrow affordably, it could turn to the eurozone’s bailout fund, but it would be much harder to rescue than Greece was a decade ago because Italy is much bigger.

The trick for the ECB will be to reassure markets while not encouraging reckless spending by governments or violating legal restrictions on directly financing governments.

“Any sense that the ECB is dragging its feet, or that the final outcome won’t be effective enough, will see fragmentation concerns rush back onto the agenda, fanning the flames of an altogether more worrying fall in the euro,” wrote Neal Shearing, chief economist at Capital Economics.

“Ten years after Draghi’s pledge to do whatever it takes, Christine Lagarde risks repeating history. She must avoid drifting into another crisis that would ultimately require her to make a similar pledge to her predecessor,” he said in an analyst note.

Italy’s political crisis, playing out in Parliament after the president rejected Draghi’s offer to resign over a divide in the coalition government, follows 17 months of relative stability. Draghi rolled out an ambitious pandemic recovery program aimed at improving long-term economic growth — the real answer to keeping Italy’s debt manageable.

The 190 billion-euro plan backed by common EU borrowing will add some debt but is intended to more than make up for it because strong growth shrinks the size of debt relative to the economy.

Italy’s debt, second highest in the eurozone after Greece, fell 4.5% in 2021 because of the country’s strong growth rebound.

Greek debt is less of an issue, Demertzis said, because it’s mostly owed to public institutions after Greece’s three bailouts during the debt crisis — and therefore isn’t exposed to market selloffs.

Draghi’s government has begun passing recovery proposals like digitizing and improving government services and streamlining a cumbersome legal system criticized for years as a drag on businesses. It also plans to increase day-care slots so more women can enter the labor force, accelerate the transition to renewable energy and extend high-speed rail and internet to more areas of the country.

But if Draghi’s coalition breaks apart and is replaced by a government less committed to pressing ahead with the reforms, markets could begin to doubt its prospects for economic growth.
Add Comment