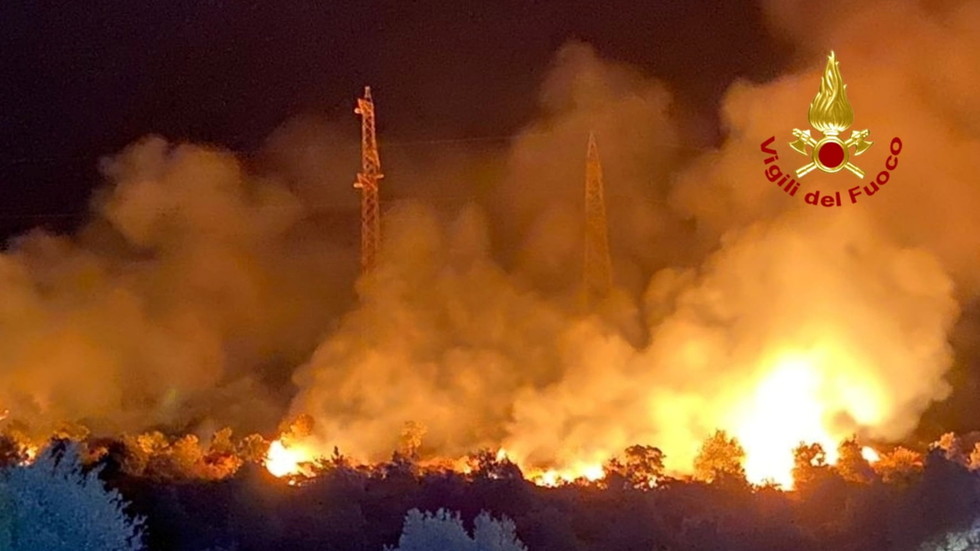 Italy fights over 500 infernos across the country, as wildfires death toll rises to 4

Italy’s emergency services fought more than 500 fires across the country throughout the night, officials said on Thursday, as the death toll from the blazes rose to four amid intense heat waves across Europe.
With Italy recording a record high temperature of 48.8 degrees Celsius on Wednesday, the nation’s firefighters have spent days battling hundreds of raging wildfires throughout the south of the country, including in Calabria and Sicily.

Emergency services were deployed overnight to try and control more than 500 blazes, as Italy and its European neighbours contend with extreme dry summer weather, which experts warn will get worse due to the effects of climate change.

On Wednesday, two more fatalities were confirmed – a 79-year-old, and a 77-year-old in Reggio Calabria who is thought to have been trying to protect his livestock. A 53-year-old woman and her 35-year-old nephew died last week in the same region whilst trying to protect their family’s olive grove from the flames.

Laying out the extent of the blazes on Thursday, the fire service confirmed they had made 528 interventions, including 230 in Sicily alone, where authorities have declared a state of emergency and deployed voluntary firefighting teams from around Italy to help control the situation.

The wildfires throughout Italy follow similar blazes in other European states, including Greece and Turkey, which are suffering from a similarly hot summer. Last week, firefighters across Turkey recorded more than 150 fires that had spread quickly through woodland due to high heat and strong winds, as the EU and Russia provided support to help put out the blazes. In Greece, Prime Minister Kyriakos Mitsotakis confirmed on Wednesday that the fires “are slowly coming under control” after parts of the country saw evacuations near populated areas.

Elsewhere, Algeria announced a formal investigation to uncover the culprits believed to be behind an outbreak of 50 fires that destroyed woodland and homes – fuelled, again, by the high temperatures experienced in the country. At least 65 people have died in the fires.
Add Comment