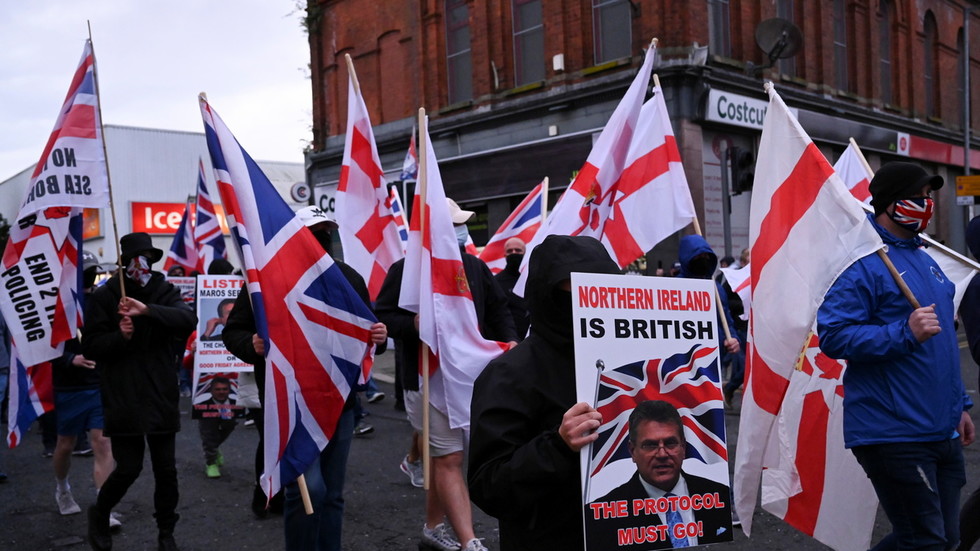 The UK's Brexit minister David Frost has said the Northern Ireland Protocol needs to change as he called on the EU to enhance cooperation with their European partner, hoping for quick and intensive talks over the coming weeks.
Speaking in Lisbon on Tuesday, Frost said that in upcoming talks the UK would be calling for a light-touch scheme which allowed British traders to freely move goods to Northern Ireland.

"We know we are getting the Commission proposals tomorrow," he stated, adding that he thought the EU's suggestions were unlikely to be adequate. "I hope we can get into discussion about them quite quickly and intensively over the next two to three weeks."

The Brexit minister admitted that relations between the two parties were at a low, and called on the EU to be more constructive, stating that more cooperation with the British government could be done in the field of foreign policy and defence.

"The EU and we have got into a low equilibrium, somewhat fractious relationship, but that it need not always be like that, but also that it takes two to fix it," Frost stated. The Northern Ireland Protocol, which essentially separates that region from the rest of the UK by putting a customs border down the Irish Sea, is not working, according to politicians in Stormont and London.

Frost said the UK would not trigger the Article 16 clause which allows for unilateral action on the protocol "gratuitously or with any particular pleasure," but was prepared to do so.

"It is our responsibility to safeguard peace and prosperity in Northern Ireland and that may include using Article 16 if necessary," he stated, adding that the protocol had lost the consent of the people, although polls have suggested people in Northern Ireland are closely split on the matter.

The minister also called on the EU to work together to resolve the issue and demanded that European politicians stop generalising Britain as being Brexit obsessed.

Speaking on Tuesday, Ireland's deputy PM Leo Varadkar suggested that the protocol had actually protected Northern Ireland from the shortages experienced in the rest of the UK. He also said it was hard to imagine how a British court could replace the European Court of Justice's oversight (ECJ) in Northern Ireland, referencing another British demand. The court decides whether institutions of the EU are acting legally, including on matters relating to trade and adherence with the bloc's single market.

To date the EU has refused Britain's calls for a more flexible arrangement on the protocol, which was agreed between the parties as part of the UK's withdrawal from the bloc. Belfast's Democratic Unionist Party (DUP) Leader Jeffrey Donaldson has threatened to leave the Stormont's power-sharing agreement unless the EU makes concessions. However republican party Sinn Fein supports the protocol, claiming it protects businesses and has accused the UK of "shifting the goalposts" in the standoff.

Concerns have been raised in the region as well as in the rest of the UK and in neighboring Ireland, that issues surrounding Brexit and the Protocol could put Northern Ireland's hard-won peace at stake.
Add Comment