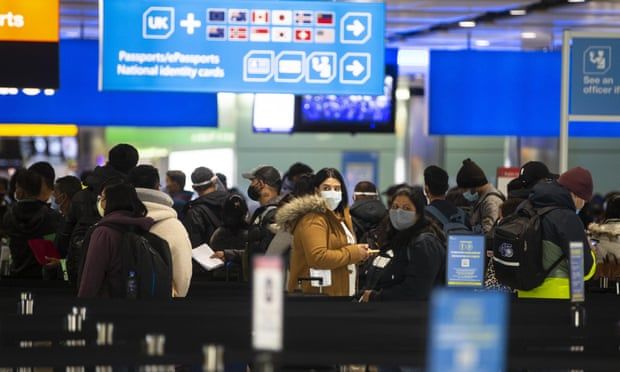 “What’s happened during the pandemic is, a whole load of incredibly time-consuming and bureaucratic procedures have been bolted on to our job.

“It’s now the case that on top of the job we normally do, which is immigration control, we spend 95% of our time doing the quarantine. Only 5% of the job that is left is our normal job. It has an extreme impact on our jobs.

“Pre-Covid, Brits, for instance, you would deal with them in about 30 seconds. Post-Covid it takes 15 minutes per person.

“When somebody comes to your desk now, you’re asking for, first of all, if they have a certificate to show they’ve tested negative in the previous 48 hours. They have to produce evidence where they are going to be staying, self-isolating evidence of where they’ve come from – because if they’ve come from a red-list country, they may have to quarantine in a hotel and provide evidence of that too.

“If you find there’s a problem, if you find they haven’t got a certificate or they’re from a red-list country and they’ve not booked the relevant test, you have to fill out forms to issue fines.

“These forms take 20 minutes to half an hour per person. If you have a family of five or six, unless any of them are under the age of six, you have to spend 20 to 30 minutes on each of those family members. This is why there are so many problems.

“If I was looking for a forgery of any type, you would simply be looking at the document and thinking, ‘If this is from an official lab that does testing, why is it they can’t spell basic words in English? Why is it the information on the certificate doesn’t correspond to the passport?’

“All of those things would ring bells and over a period of time you end up getting patterns of areas, certain countries, certain areas or organisations.

“It’s pretty common. You’re mostly talking about people arriving from not particularly affluent countries. They hope by paying for a forgery they will avoid paying the costs for tests and quarantining.

“When the borders open further on Monday, we will fall over. Unless something changes, like the 100% requirement for checks, at Heathrow we will be unable to cope.

“In the build up to Pakistan and India entering the red-list countries, the night before, we had queues that took four hours to deal with.

“I have colleagues who have said they have forgotten to ask the immigration questions because they have so much to deal with.”
#Covid
Add Comment