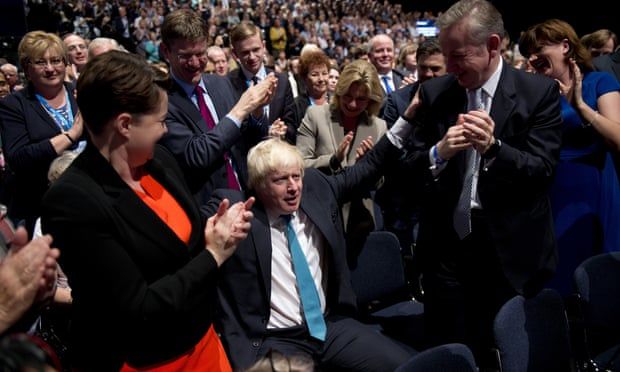 It’s not just Johnson: the whole culture that cheered him on needs booting out

I was mourning my mother as Downing St partied. But even I can’t blame this morally bankrupt prime minister alone
On the last Sunday before the 2019 general election, the Sunday Times cast its vote. “Mr Johnson is regarded with some suspicion by voters,” its editorial admitted. “He has an on-off relationship with the truth,” often preferred “bluster to grasp of detail”, and had a “colourful private life more typical of a French president”. Nonetheless, the paper urged its readers to put a liar, a bullshitter and a renowned moral incontinent in charge of the country. In making this argument, it was joined by the vast majority of national newspapers, and by the end of that week they got their wish.

Over the past few days, those very same papers have discovered that a liar, a bullshitter and a moral incontinent runs the government. They are, naturally, horrified.

The furies are now descending upon this prime minister. Having thoroughly chewed him up and digested every last point of polling advantage, the party he led to its first serious majority in 30 years is about to spit him out; the very MPs who most directly owe him their seats are plotting his demise. The obit already being written is about how one man, beset by monstrous flaws of character, presided over a rotten, insensate culture in Downing Street. Scarcely a word is said about how a rotten political culture chose this cracked actor to be prime minister in the first place.

Even to ask the question is to divert from Westminster’s splendid game of Pop Goes the Weaselly Politician. Yet look around and count the examples of a truly ulcerous politics. Here are the columnists, gravely warning that to cling on to Boris Johnson is to endanger democracy – two years after excusing his attempts to shut down parliament and ram through his Brexit. Over there are the backbenchers, mutinying not because their leader broke his own lockdown rules but over how this might affect their careers. Heckling from the wings is breachfinder-general Dominic Cummings, apparently unencumbered by any shame over his own eye test at Barnard Castle. Centre stage is, of course, Johnson, on trial not for racking up the highest Covid death toll in Europe, but for telling people to follow one rule and doing precisely the opposite. For, in other words, hypocrisy – one of the few things, as Alan Bennett has observed, at which the English still lead the world.

In saying this, I am not making light of the Downing Street parties. In spring 2020, my mother passed away. It is part of my culture for friends to come over with meals for the bereaved, to sit with them in mourning. Friends handed over carrier bags of food from the road. Given the public health emergency, there was no question of them coming inside. My wife and I sat alone. More fool us.

Yet, even as I recall that painful period, the charges on which Johnson is now arraigned still strike me as odd. Winking at rules, lying about it afterwards … what did people think he was going to do? He practically bragged about his ability to pull off such feats. He converted what most of us would consider vices into political virtues, which is partly why the election of 2019 was an event of such consequence. Bringing great institutions into disrepute? It was much-corroded institutions that cheered him into No 10. Johnson won every single ballot of Conservative MPs in 2019, and swept the vote of party members. He repaid the debt by filleting the parliamentary party of many of its most competent members, on the grounds they disagreed with his hastily scrawled plan for Brexit.

During an election campaign in which he hid from an interviewer in a giant fridge, and pocketed a journalist’s mobile phone after refusing to look at a photo of a sick child sleeping on a hospital floor, most of the media persisted in treating him not as a threat to freedom of the press but as the best standup on the Leave circuit.

What fuelled Johnson’s ascent was how well he learned a lesson of predecessors on the right: you could break the institutions that held the UK together as a social democracy and dissolve its political trust. You could be a political vandal, an economic bulldozer and a class bully, and still the press would praise you as statesmanlike, while the public handed you a landslide. From Margaret Thatcher onwards, the right has broken up the public sector into something the lobbyists, the consultants and the profiteers can freely loot. Electricity, water, council housing, the railways: all have been turned into so many troughs for the pinstripe hordes to sup at. Underneath the blond mop and behind the great toothy grin, Johnson’s pitch has always been that he will destroy the rest. Of course he’s bad at government: he believes government is bad.

To stave off the inevitable, Johnson has come up with an escape plan of rightwing policies, charmingly referred to by the government of Ghana – which would apparently be receiving some of Britain’s asylum seekers – as Operation Dead Meat. It is the same programme of bulldozing institutions, but this time played at manic intensity and speed. Scapegoating senior civil servants for the wine suitcases in Downing Street. Freezing the BBC licence fee and warning Auntie that soon the cupboard will be entirely bare. Almost certainly the next thing to be thrown overboard will be parts of the net zero programme. These aren’t aimed at winning back the public, but kissing up to the rightwing press and the Tory headbangers who can keep him in No 10. What’s left is a punitive state: the military supposedly seeing off desperate Afghans in small boats, the police deciding who is or isn’t entitled to go on a demo.

The antithesis to all this is not a return to normalcy led by the political management class, whatever the talking heads might say. The Right Hon Member for Greensill or the chancellor for BlackRock were just as determined at trashing the public sector. All those decrying Johnson as a sociopath would do well to read the recent paper in the peer-reviewed BMJ Open, which finds that over just four years in England alone David Cameron’s austerity was responsible for more than 57,000 deaths.

The route out of this debacle begins with recognising that a mere change in personnel at No 10, even at the very top, will alter next to nothing. It would be far better to repair the country’s shattered institutions, and allow communities to build their own, both economic and political. This also means a dramatic shift of power away from Westminster. Until then, we are left with the pathetic sight of a rule-breaker who vows more law and order. A public-school populist who dissembles like any other politician. An authoritarian whose authority has drained away.
#Boris Johnson  #Johnson  #Covid
Add Comment