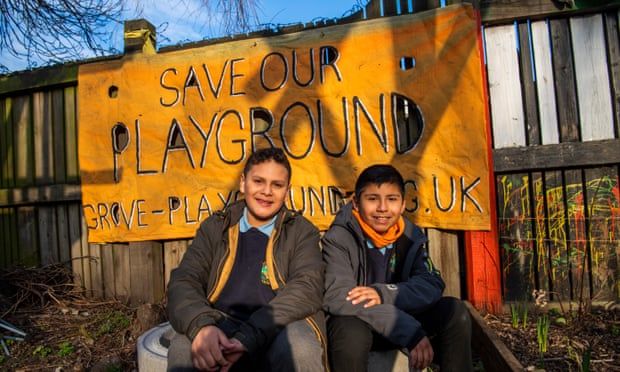 “I like everything here but that swing makes me feel sick.” Leire, seven, has a smile on her face as she pushes her friends Romeo and Gabriel. Despite the cold the three of them have hurried straight to the Grove adventure playground in their school uniforms to start playing.

Walk down a quiet back street in Brixton, south London, and the Grove adventure playground appears on the grey skyline as a riot of red, yellow and blue. “When a child walks in they know they are somewhere special,” says Nick Lewis, who helped save the playground from closure a few years ago.

Here, children – some of whom may live in flats with little or no outside space – can climb rickety wooden towers, light fires in the communal fire pit and jump in puddles.

But although the doors are open, a “Save our Playground” sign hangs in the trees. The Grove is clinging to survival, its constant struggle for funding part of a wider crisis for adventure play, an energetic philosophy born in the years that followed the second world war and inspired by activists who saw how happily children played on bomb sites.

“This is a space for play,” says play lead Ashlee Aderele. “We connect children here with nature but they don’t even notice – it’s just here in every corner – the fire, the mud, the wood – they are part of it without noticing because they are playing.

“But there isn’t any funding just for having fun. We can get funding from Lambeth council for projects like food for the kids, or for providing sessions for children with special needs, and we are surviving but there is very little money just for play.” 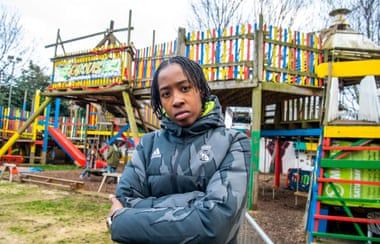 Figures from Play England given exclusively to the Guardian show that at least 21 adventure playgrounds have been lost across England since 2017. Their research found 126 sites that matched the description of staffed outdoor play, free for children to attend. This is down from 147 in 2017. Many more have lost direct council funding or have severely reduced their hours or staffing levels.

In Crawley, East Sussex, they have closed all four of the town’s adventure playgrounds, despite a local campaign to save them. “It’s heartbreaking,” says playworker and photographer Jeff Pitcher, who was involved in the campaign, but was made redundant when the playgrounds closed. “I went over today to look through the fence at one, Creasys Drive. The play equipment – which only needed minor repairs – has been removed and it’s just a locked expanse of land now.”

Pitcher says children need the spaces more than ever. “These playgrounds were built as part of Crawley’s ‘new town’ dream back in the 60s. They were pockets of refuge, where kids could learn how to rub along together and play healthily outdoors. Last summer, in their final days we had 300 families a day across the two most popular sites.” 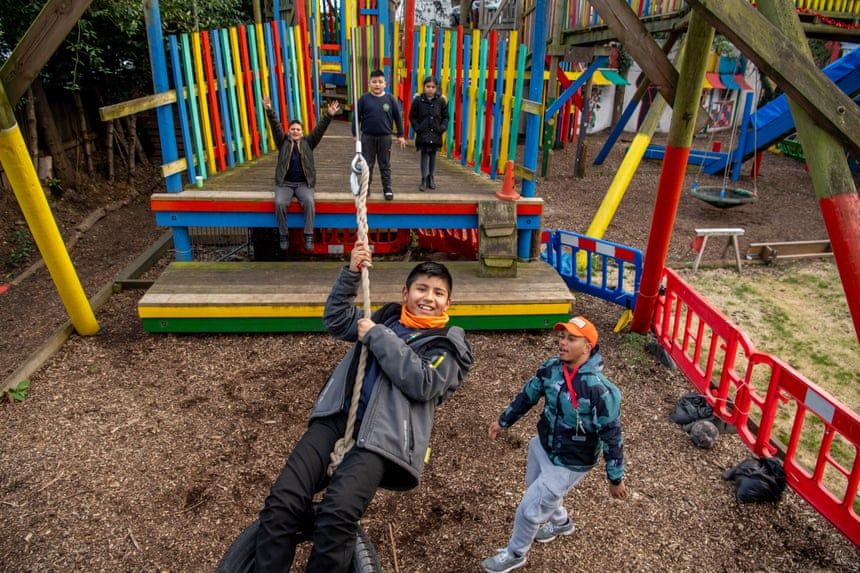 The Guardian spoke to local parents who say the playgrounds are a huge loss. The council says it has “mothballed” two of the sites “pending investigation into future use” and insists they had reached the end of their lives. The two other sites will open as “fixed, unsupervised” play areas later this year.

Crawley council argues that the playgrounds were expensive, at around £30 per head, by the time they closed; a figure Pitcher denies.

“The loss of 21 adventure playgrounds is 15% of provision, a significant and worrying trend away from the hope that the Blair government generated with its generous play funding in the early 21st century.

“These just can’t be compared to ‘fixed’ playgrounds in parks; they are community spaces where thoughtful staff help children engage with nature and play with other children of different ages – an experience we are losing in wider society.”

There are models of good practice. In Islington, Grant runs six thriving adventure playgrounds with a 15-year funding commitment from the council. The first was started by local mothers in the 50s. 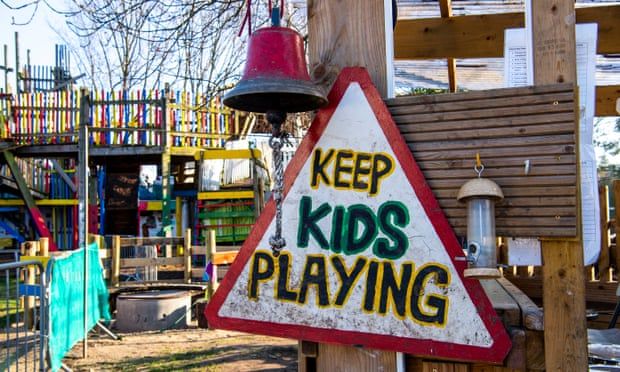 At the Grove, occasional grants from charities keep them alive, in particular paying staffing costs. At the heart of the playground is a philosophy of healthy risk. A comical plaque honours a spot where a child broke a bone playing.

Aderele watches as Romeo and Gabriel get ready to jump.

“That swing often worries them. I take it very slowly. I say: ‘Come on, I’ll hold you.’ The progression to jumping from higher points might take weeks. They are so proud, they say: ‘Oh, can I bring my mum in to see how high I climbed?’ It’s really fun helping children face their fears in the outdoors. I have a job where I just play all the time.”