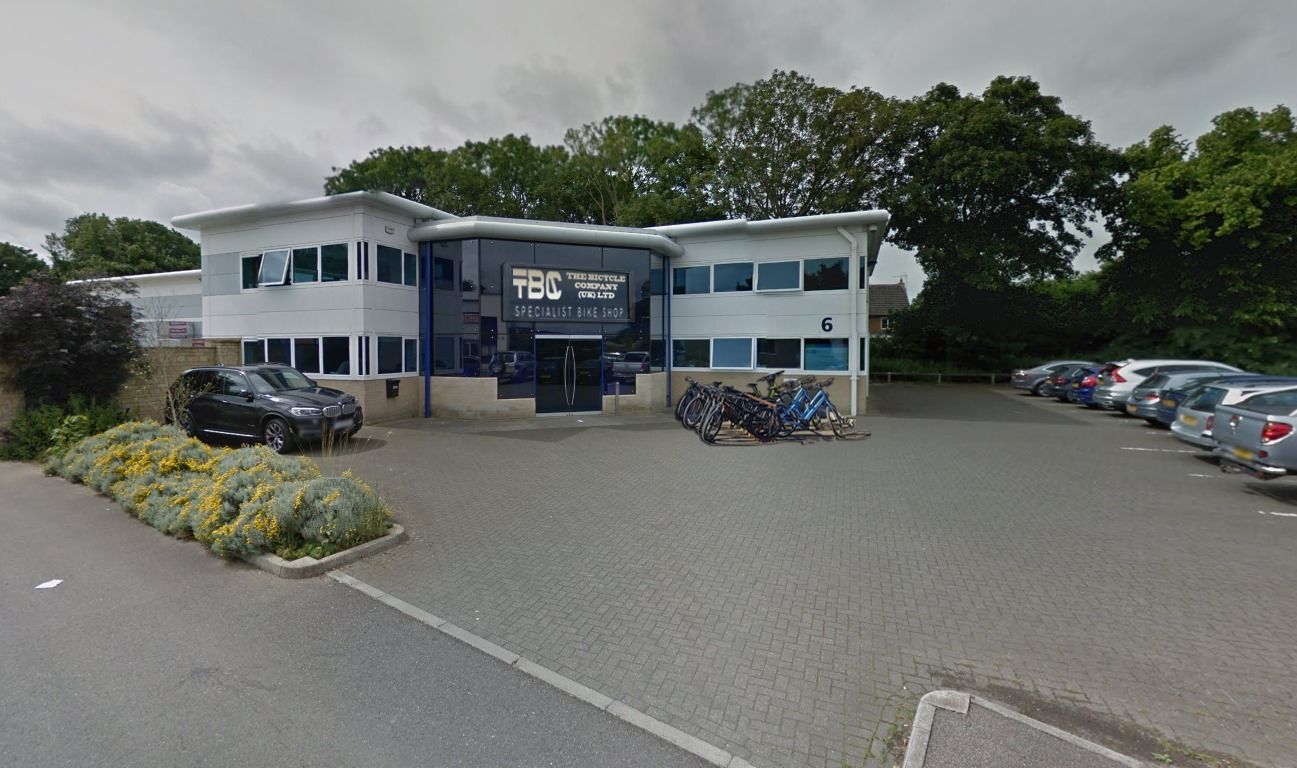 Here's what we discovered about The Bicycle Company UK when we did some digging on this scam website. Avoid at all costs!

Although it seems their days are numbered, there’s still a chance they could still catch people out. Thanks to members of our forum this ‘company’ have been brought to our attention. The Bicycle Company UK seemingly appeared from nowhere, and for the last few months have been scamming people, offering bikes at discount prices when no one else has stock.

Using a dormant company for cover and trying to appear legit by using the addresses of existing businesses, they’ve managed to dupe a few people. The scam site is using the addresses of two actual businesses, Bicycle Richmond and PGR Construction. They’ve done all they can to seem like a real business. Built a website, tried to pass off a Companies House profile as their own, and started online profiles. But there’s more to the story.

To stop ‘The Bicycle Company UK’ from scamming anyone else, here’s what we found when investigating.

It appears The Bicycle Company UK website appeared around May 2021. Their Facebook page uploaded the first picture on 20 May. Their Companies House profile is actually not theirs at all, a dormant company that they’ve taken advantage of.

The actual directors are Steve and David Wilcock and Rory Canning. People who wanted to start a company but never got round to it. The scammers took advantage of this. Even going as far as making a Facebook profile for Steve Wilcock and putting him down as director of The Bicycle Company. In a Google search, one of the listings comes up with ‘Steve Wilcock फेसबुकमा छ’, it seems the profile may originate from Nepal.

The addresses on the scam site are legitimate businesses, 6 The Old Quarry, Nene Valley Business, Park, Oundle, Peterborough, PE8 4HN. This is actually the address of PGR Construction. The other, 120a Sheen Road, Richmond, Surrey, TW9 1UR is the address for Bicycle Richmond. If you search for the company number on Companies House you will get Bicycle LTD, the company information for those who own Bicycle Richmond.

We spoke to PGR Construction and Bicycle Richmond to find out more. 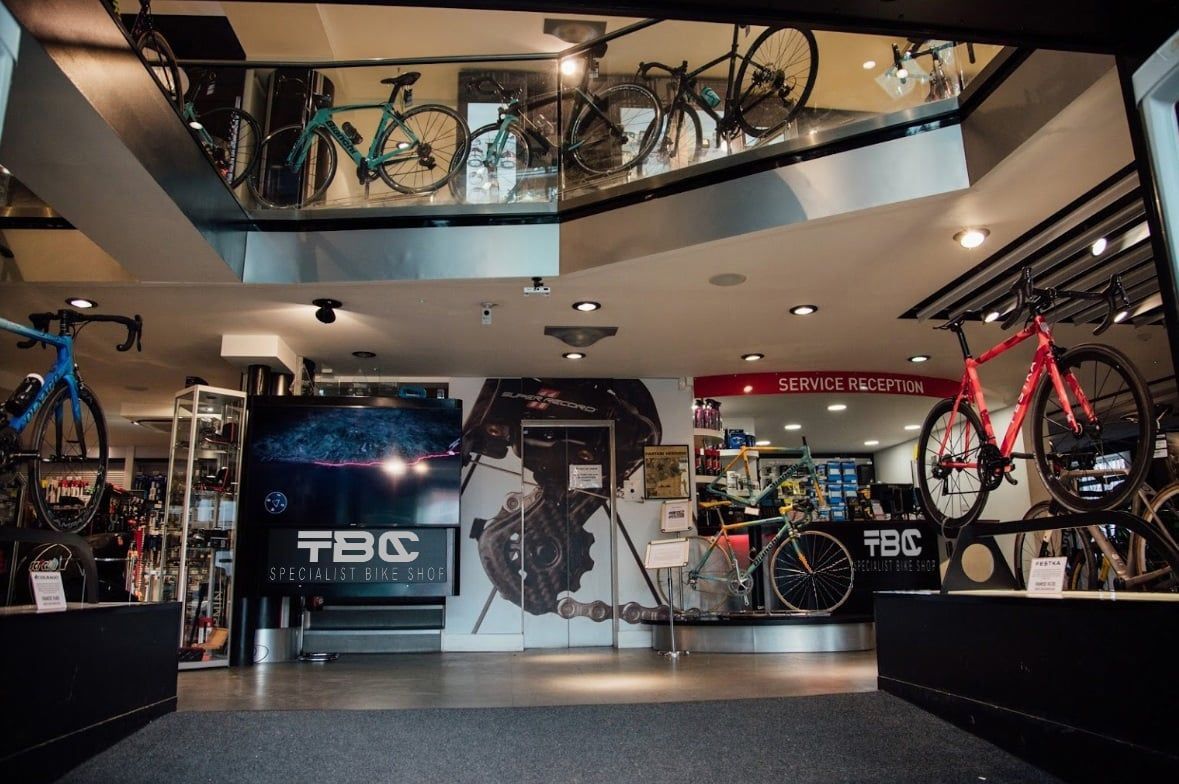 Their alleged store. Taken from Facebook. Can anyone name the real shop?

Talking to PGR Construction it has been revealed that they share the business premises with an accountant. Many of the accountant’s clients use the address to register their business with Companies House. Talking to Lee Jinks from PGR Construction, he revealed that ‘The Bicycle Company (UK) LTD’ incorporated on Companies House in 2018 is legitimate. The directors had every intention of setting up a business, but it hasn’t happened. The scammers saw the opportunity to use the dormant company as part of their scam. This is why the company is now being dissolved. 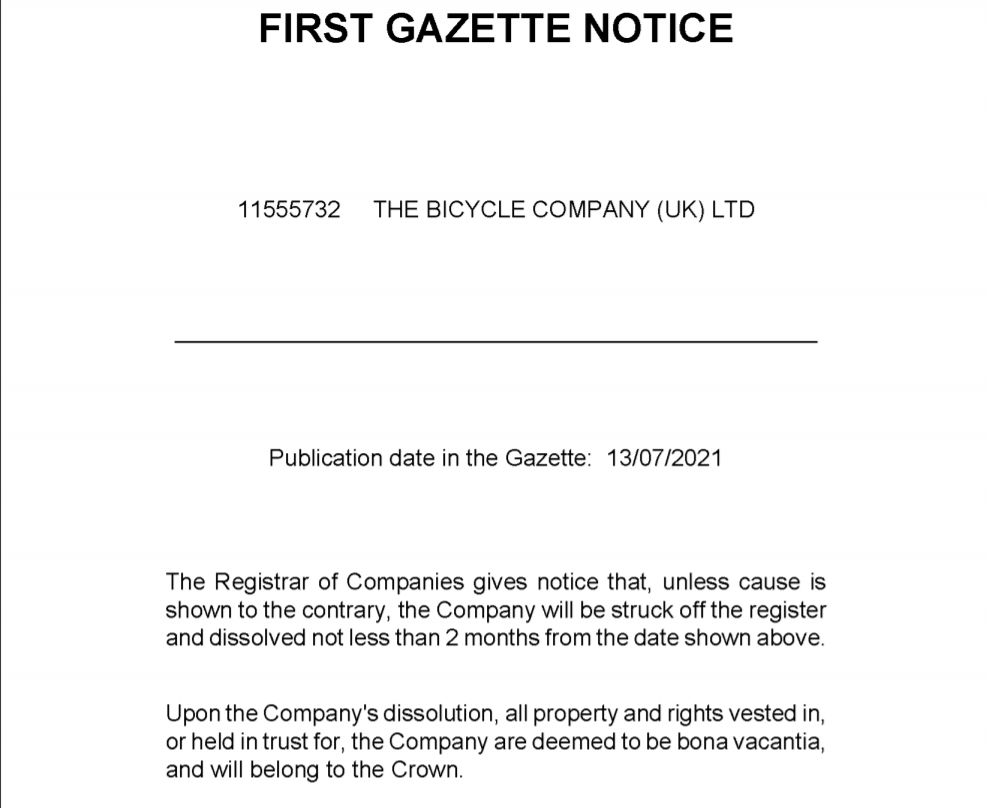 Trying to Shut Them Down

"It was a dormant company, they (the scammers) adopted their name and set up a website." It’s been a nightmare because people are ringing us as they’ve seen our offices and we’re getting about 4-5 calls a week. I’ve had the website shut down once but the host is now in the States. We’ve contacted the police who referred us to Action Fraud but nothing seems to happen. Whilst the host was in the UK within a few calls, I could talk to them and they would take it down. Now the host is in America, the information they want will take me forever and this is nothing to do with our business.

When I spoke to Action Fraud they told me it’s a bit of a trend at the moment, scammers will look on Companies House, find a dormant company, set up a website and fraudulently take people’s money. The people who wanted to set up a business were legitimate, it just never happened. Now they are doing all they can to squash it.

Bike Richmond are aware of the fraudulent details being used on the scam website. They are getting up to five calls a day from people who have been scammed by the site.

Bicycle LTD, have been made aware of the fraudulent website named. We have reported this issue to the Metropolitan police force, as well as the website domain administrators, and Companies House. So far none of these organisations have provided any assistance in removing the website.

The Bicycle Company is currently using our address and company registration details to scam people online by taking payment for advertised products that they do not have. All the bicycles listed require a valid dealer contract to be in place, none of which have been recognised by the bicycle manufacturers. Furthermore, many of the bicycles advertised are older models that have not been in stock for months. Anyone who has been affected should contact the Police and get a crime reference number. We were informed by the Police that the fraudulent use of our company details to open a website was not considered a crime, so I urge people who have lost money to report it so they take action.
--Perry Jamieson, Workshop Manager at Bicycle Richmond

Photoshop Not Quite on Point

Having a quick look at their website reveals a photo of their business premises. Upon first glance, you might not see anything wrong with it. However, with a little bit of digging it seems the photo being used is in fact a screengrab from Google street view from 2016. 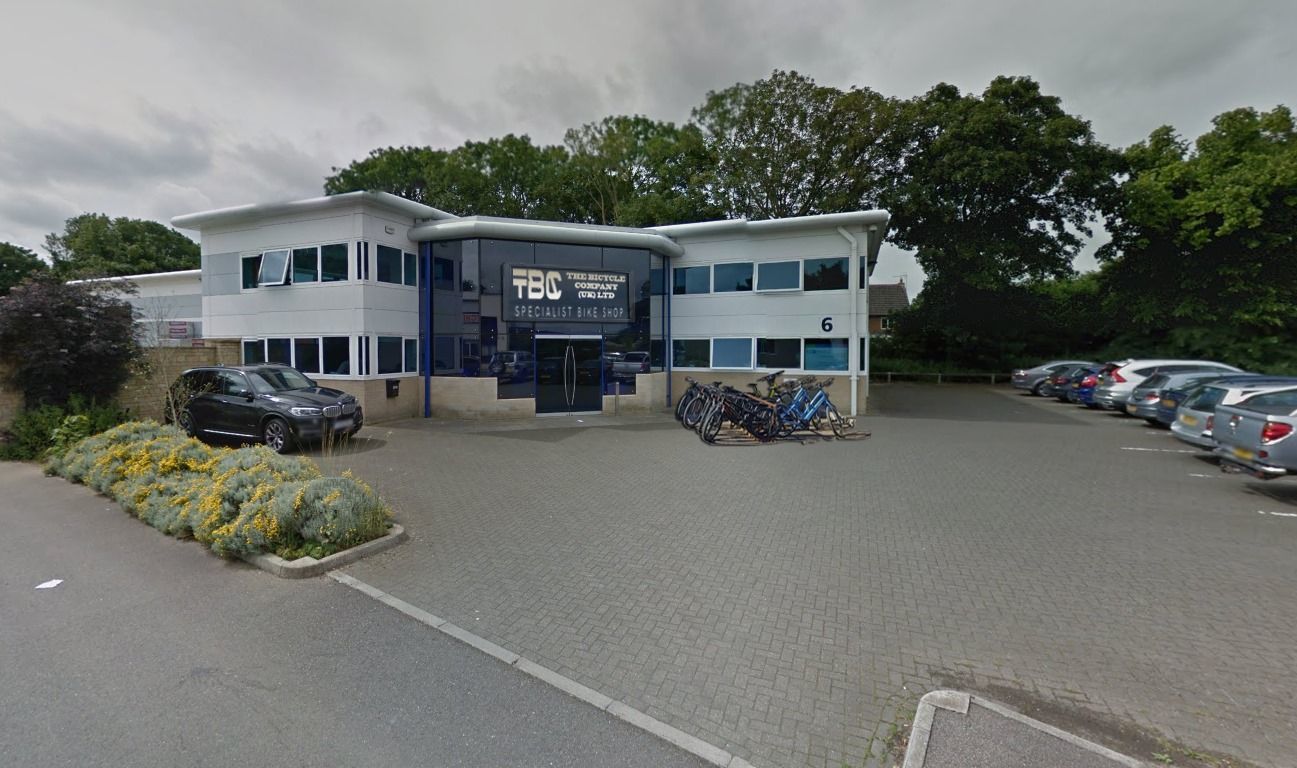 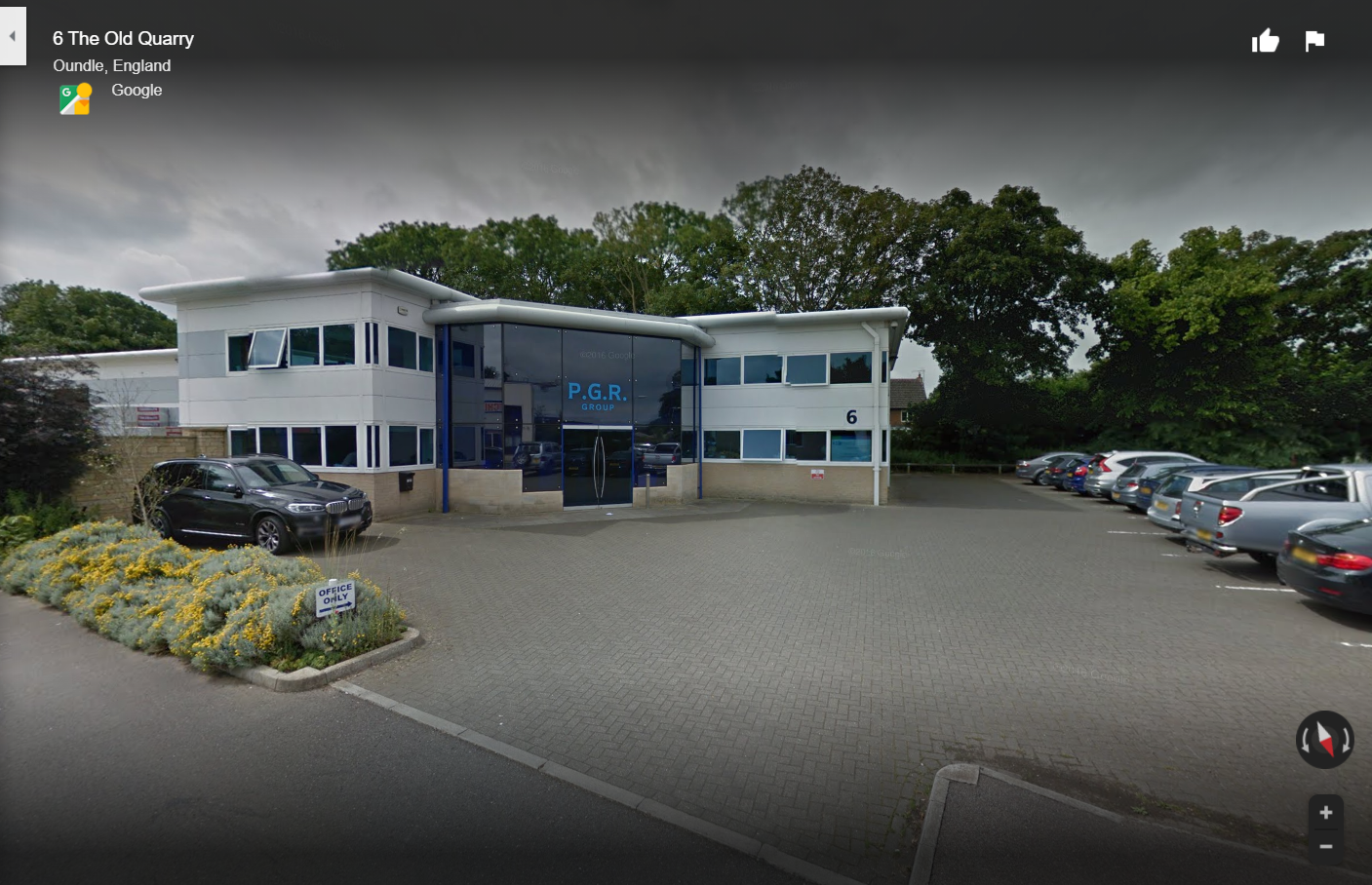 A Singletrack reader, Sarah Bug reached out about her experience of being scammed by the site:

Even though I should be experienced and smart enough not to fall for a crappy website like this, I ordered an Early Rider bike for my daughter.

Obviously, I never got the bike. But as they were talking to me via chat using poor English and talking bullshit, finally my brain kicked in. So, relatively quickly I reported them to the police (in Germany, where I’m based) and advised my bank to do a chargeback. I got the money back and I’m in contact with the police, it looks like they’re actually investigating. I reported them to the police, to an English site, to their chat system and vivawallet.

The weirdest thing, last night they sent me an email saying my order is cancelled (after they changed the status of my order to “delivered” a couple of days ago). They offered me to refund my money but they also asked me for a second payment to do a new order.
--Sarah Bug

Although the site has now been taken down (as of 4:00 PM UK time on 6 August) we’re not sure if it will be gone for good. We’ve also heard that the site have been contacting people who have made orders to get them to order a second time. The person was told their card would not be charged again but they need to reorder to ‘keep the order valid.’

Looking at their Trustpilot Reviews, it’s clear that The Bicycle Company UK react badly to any bad feedback. To any mention of a scam, their response is to call the review fake and say it’s either been left by competitors or “some crazy people that are just making fun over the internet.” Their site link from Trustpilot appears to lead to another website entirely. The link leads to The Bike Company, a business that isn’t that active online, their social media was last updated in January.

Talking to The Bike Company, they are aware that The Bike Company UK’s Trustpilot links to their website and they have reported it. They are hoping to get the link removed.

Mark, our editor left a review on Trust Pilot. It appears we are now on their radar.

One of our competitors named Singletrackworld.com trying to make bad referral on our company, to gain unfair traffic. We are not involved in any type of fraud, we just sell bicycles. They tried to do whatever is necessary to ruin our business. Since the past three months they harassed us continuously. They even made a forum on their website as referral but we blocked any bad referral from them using htaccess options: https://singletrackworld.com/forum/topic/anyone-heard-of-the-bicycle-company-uk-is-it-dodgy/

We’re aware of Singletrackworld.com forum, and we have a process in the court in regards to all of these online treats. We will ask for major rewards in regards to all injuries caused by the negative advertise made to our online business company reputation.

He even tried to call us abusinvely during the entire day. Please don’t try to be fooled by these guys who tried to treat you as well I guess… Stand up, finger closed, and we will solve this issue in court.
--The Bicycle Company UK (on Trustpilot).

Do Not Shop with The Bicycle Company UK

We can only hope that this site will soon be shut down for good* for the sake of people who have been scammed and the businesses it is having an impact on. Yes, The Bicycle Company UK is a scam, do not shop with them. Head to the Action Fraud website to report fraud or cyber crime on their website.