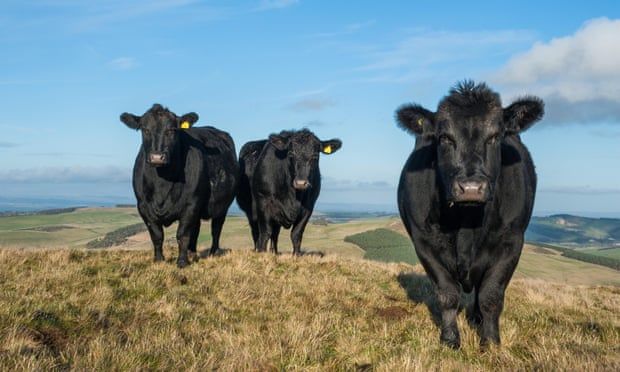 The UK government was facing a backlash on Saturday over its plans for a trade deal with Australia, which have led to anger from farmers and environmentalists and calls for the Scottish secretary to resign.

Farming unions said that proposals for a zero-tariff and zero-quota trade deal would drive farmers out of business, while green groups said allowing Australian hormone-treated beef would breach the Conservatives’ manifesto commitments.

The Scottish National party added to the clamour for a rethink by calling on Alister Jack, the secretary of state for Scotland, to “fight back or resign” if he failed to stand up for farmers.

Ian Blackford, the SNP leader in Westminster, wrote to Jack, saying the deal would “place a time limit on the future of farming livelihoods across these islands”, and would also disproportionately affect Scottish farmers and crofters.

“Such a trade deal would represent a bitter betrayal of rural communities, undermining and undercutting our agricultural sector and would amount to a genuine threat to future viability,” Blackford wrote. If Jack’s views are ignored by the cabinet, Blackford wrote, then “your only credible option is to make clear that this is a resigning matter”.

Opponents of Scottish independence fear that the row over farming may fuel support for a new referendum in rural areas where there has previously been pro-union support.

Farming leaders were taken by surprise by news that Liz Truss, the trade secretary, would offer her counterpart in Canberra a deal with a 15-year transition period leading to unfettered free trade, without protections that farmers had asked for.

Ministers are aiming to have the deal signed before the G7 summit in Cornwall on 11 June.

Minette Batters, the National Farmers’ Union president, said it was “incredibly disappointing” that the government had not told farmers about the “wholly irresponsible” proposals, and that it should provide details urgently.

“It is also incredibly concerning that the government is in a ‘sprint’ to sign up to a trade deal with Australia that would have serious implications for British farming and would seemingly offer very little benefit to the economy,” she said.

The Department for International Trade (DIT) estimates that UK GDP will grow by 0.025% over the next 15 years as a result of a deal.

Batters added: “The prime minister and his government have pledged to level up the country. Agreeing to a tariff-free trade deal with a major agricultural exporter, with no safeguards or review mechanisms, would do exactly the opposite of that commitment and set swaths of rural Britain backwards.” 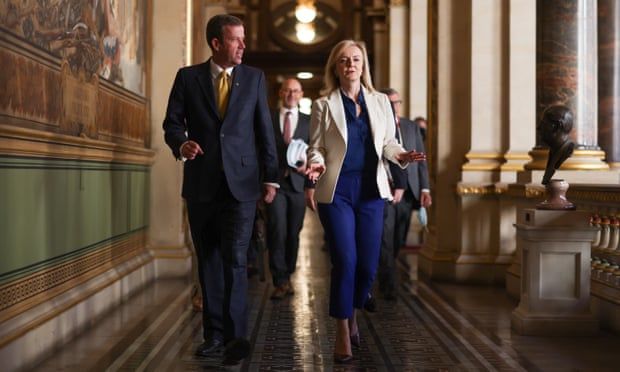 Truss held talks with Dan Tehan, Australia’s minister for trade, and is thought to have outlined the UK proposal to him. She won the prime minister’s support during a cabinet meeting on Thursday after apparently outmanoeuvring the environment secretary George Eustice and Cabinet Office minister Michael Gove.

Last year, environmental groups and farmers spent months lobbying ministers and emphasising that trade deals should not compromise food standards or animal welfare. In November, Eustice and Truss made a joint pledge not to allow imports of hormone-treated beef or chlorinated chicken as part of any trade deal.

Australian farmers are allowed to use hormones to make cattle grow bigger, and as a result their meat is subject to an import ban by the EU.

Tanya Steele, the chief executive of WWF, warned the government not to forget its obligations on climate ahead of the Cop26 summit later this year.

“Rushing to align ourselves with the laggards on climate and nature – without guarantees to uphold core standards – invites lower standards of production on to our shelves, and risks exporting our environmental footprint rather than reducing it,” she said.

Supporters of the trade proposal, such as the Conservative peer Daniel Hannan, have raised the prospect that farmers will receive subsidies for maintaining the countryside. Not all farmers are enthusiastic about the idea of changing their role from food producers to park wardens.

Tim Bonner, the chief executive of the Countryside Alliance, said that the government expected farmers to manage the countryside and tackle the climate crisis, but farms needed to be profitable to do this.

“If trade deals increase competition and therefore reduce commodity prices over time, then farmers will require additional support and compensation to deliver the public goods which are critical to meeting government targets,” he said.

A DIT spokesperson said: “We keep farmers and senior figures from across industry closely involved throughout all trade negotiations.

“The trade secretary talked with the NFU this week, and ministers also met with farming representative organisations, including NFU Scotland, to discuss the Australia FTA.

“An Australia deal would open up export opportunities for our farmers and include protections for the agriculture industry, while also ensuring farmers are not undercut and the high standards we have in place are not compromised.”