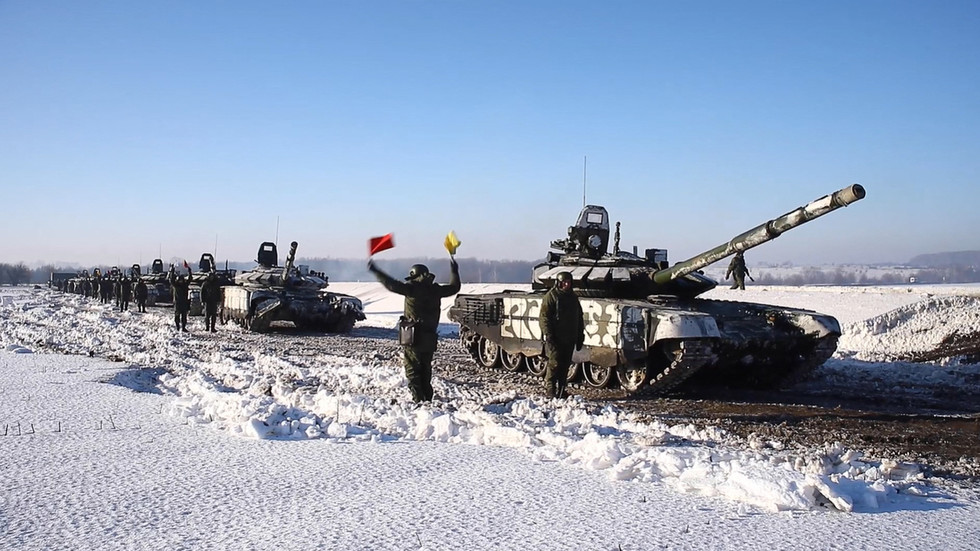 If you’re American and oppose war with Russia, expect to be smeared as unpatriotic

Pro-war hawks in the West have resorted to overt hostility toward those who argue against conflict in Ukraine
On Tuesday, after weeks of international uncertainty and fears of conflict, Russia announced it would be pulling its troops back from the border with Ukraine. This news came after repeated assurances from President Vladimir Putin and officials that Moscow had no desire for war, and that troop movements and positioning were merely training exercises.

Markets immediately responded to this development with renewed optimism, as the Dow jumped 400 points, European stocks closed higher on Tuesday, and natural gas and power prices fell. However, one group curiously silent in light of the seemingly positive turn of events was the war hawks, goaded by Western media, intelligence, and politicians, who in the preceding hours had all but assured the public that an invasion and armed conflict were inevitable.

And while the establishment neo-cons and neo-libs may say that their hawkish warnings and preparations were simply the logical conclusion given the information available at the time, it’s important to remember that throughout the recent hysteria, there have been voices who attempted to pull back the mounting calls for war. However, rather than address their reasoning, the pro-war camp instead resorted to smears in order to justify their peculiar need to stoke tensions with another global superpower.

Specifically, in one attempt to contextualize the intelligence communities’ assurances that Russia’s troop actions were a build-up to aggression against Ukraine, Green Party member and former presidential candidate Jill Stein reminded her social media followers of how officials had not just been wrong about previous conflicts, but had actually lied to the public to garner support for action in Vietnam and Iraq, among other wars. Similarly, many of these same insiders had also been less than truthful about recent stories involving Julian Assange and Russiagate.

The general response to Dr. Stein’s post was positive overall, in keeping with polling which suggests the American public has no interest in involving their country in new foreign engagements. However, the reaction from the pro-war camp was to accuse Dr. Stein of being a Russian asset. Because, of course, what other reason could there be for someone to oppose costly military intervention based on shaky intelligence other than disloyalty to their own country?

And in this same vein, Tulsi Gabbard, another vocal anti-war advocate who has fiercely criticized interventionist American foreign policy, has also spent weeks warning of the conflicting interests motivating those banging the war drums. Often, as Gabbard has pointed out, officials who are most supportive of American military action overseas are also those who stand to gain monetarily through defense contracts and spending.

What’s more, Gabbard has even gone so far as to suggest that by encouraging Ukraine to join NATO, certain American actors might actually be trying to spark a new Cold War, not to benefit US security interests, but rather the military industrial complex. After all, historically, American policy has considered breaches in spheres of influence occurring in countries close to them, such as Cuba, to be acts of aggression. What makes Western encroachment in Ukraine any different?

As with Dr. Stein, however, sadly Gabbard’s criticisms were met with the usual accusations of being a foreign asset, with little to no attempt to address the actual substance of her position.

Across the aisle on the political right, one of the most prominent anti-war voices that has emerged is Fox News’ Tucker Carlson, who has likewise been attacked for his views. Carlson has frequently devoted time on his program to questioning whether, regardless of Russia’s intentions, involving the US in Ukrainian affairs is in America’s best interests, especially at a time when domestic problems abound. Additionally, Carlson has been skeptical of political attempts to paint Ukraine as a Western-style democracy in order to garner public support for any potential alliances or interventions.

For his efforts, Carlson has received especially vicious condemnation from the likes of David Frum, who in 2003 accused those who were against military action in Iraq of being “unpatriotic.” In a scathing article in The Athletic, Frum accused Carlson and others on the antiwar right of spouting “Vladimir Putin’s talking points,” and ironically likened his position to “isolationists who hoped to profit politically from that passivity.”

Russia’s troop withdrawal may have temporarily neutered the pro-war momentum building in Western discourse. However, the overt hostility toward those who argue against escalating tensions with Russia may signal that it’s only a matter of time before establishment forces are once more arguing that it is not just beneficiary, but rather necessary, for Western militaries to strike before Russian forces can do the same.
Add Comment