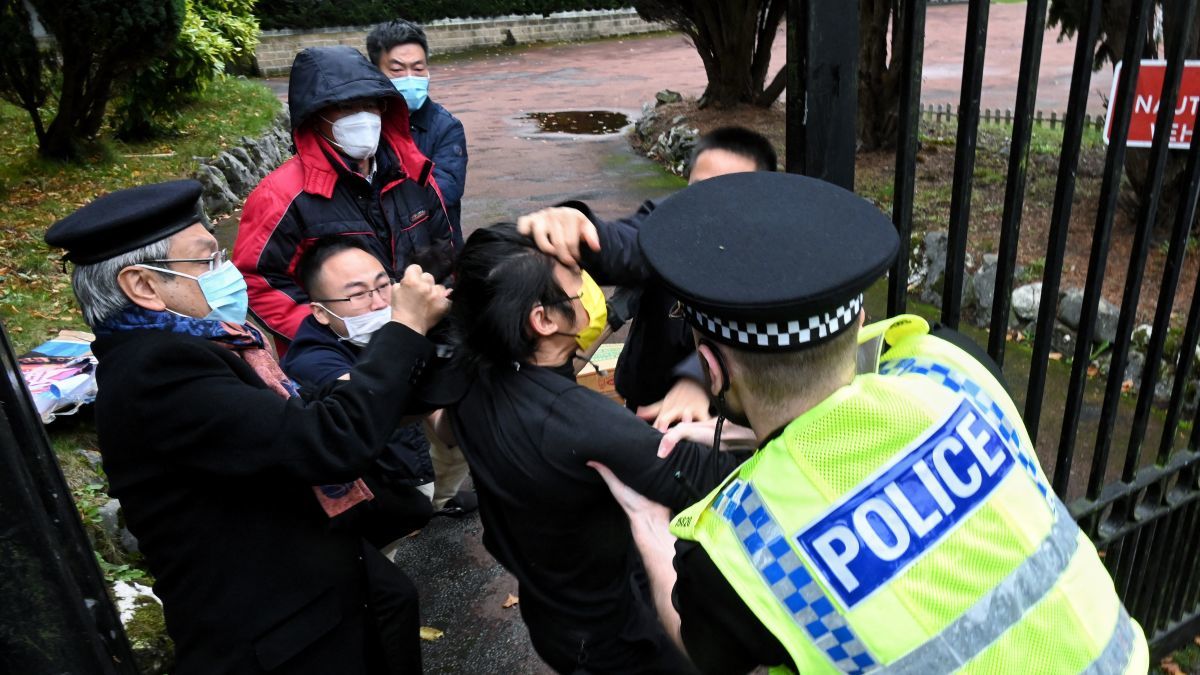 A Hong Kong pro-democracy protester was pulled into Chinese consulate grounds in Manchester on Sunday and beaten up.

Unidentified men came out of the consulate and forced a man inside the compound before he escaped with the help of police and other demonstrators.

The protester told the BBC: "They dragged me inside, they beat me up."

The Foreign Office said it was urgently seeking clarity on the incident. Greater Manchester Police has launched an investigation.

Speaking after the incident, the protester, called Bob, told BBC Chinese that "mainlanders" - people from mainland China, as opposed to Hong Kong - had come out of the consulate and destroyed their posters.

"As we tried to stop them, they dragged me inside, they beat me up," he said, adding that he was then pulled out by the UK police.

"It's ridiculous. They [the attackers] shouldn't have done that. We are supposed to have freedom to say whatever we want here [in the UK]."

After the incident, the crowd remained angry. Protesters shouted at the men from the consulate and the British police, arguing they could have done more.

Consulate staff had previously asked the protesters to move to the opposite side of the street.

There were two police officers at the protest, but several more appeared within minutes of the altercation beginning.

They gathered at the gates of the compound trying to break up the fighting and move protesters back.

One police officer entered the consulate grounds and pulled the man who had been dragged inside back out.

At least eight men - some of whom were wearing helmets and protective vests - then returned to the consulate building.

The consulate is on UK soil, but cannot be entered without consent.

Reacting on Twitter, former Conservative leader Iain Duncan Smith said the UK government should demand a full apology from the Chinese ambassador, and that those involved should be sent back to China.

The demonstrators were protesting as the ruling Communist Party congress began in Beijing.

President Xi Jinping, who is set to secure a third term in power, said he had turned the situation in Hong Kong from "chaos to governance", referring to China's suppression of pro-democracy protests there.

A spokesperson for the consulate said the protesters had "hung an insulting portrait of the Chinese president at the main entrance".

"This would be intolerable and unacceptable for any diplomatic and consular missions of any country. Therefore, we condemn this deplorable act with strong indignation and firm opposition," the spokesperson added.

A spokesperson said Greater Manchester Police was aware of the incident.

"Officers were present and responded immediately to defuse the situation," they said. "Enquiries are ongoing at this time to understand the full circumstances."

"I understand Greater Manchester Police responded immediately to the incident and I am conscious their inquiries are ongoing so it would be inappropriate for me to comment beyond that," the prime minister's official spokesperson said.