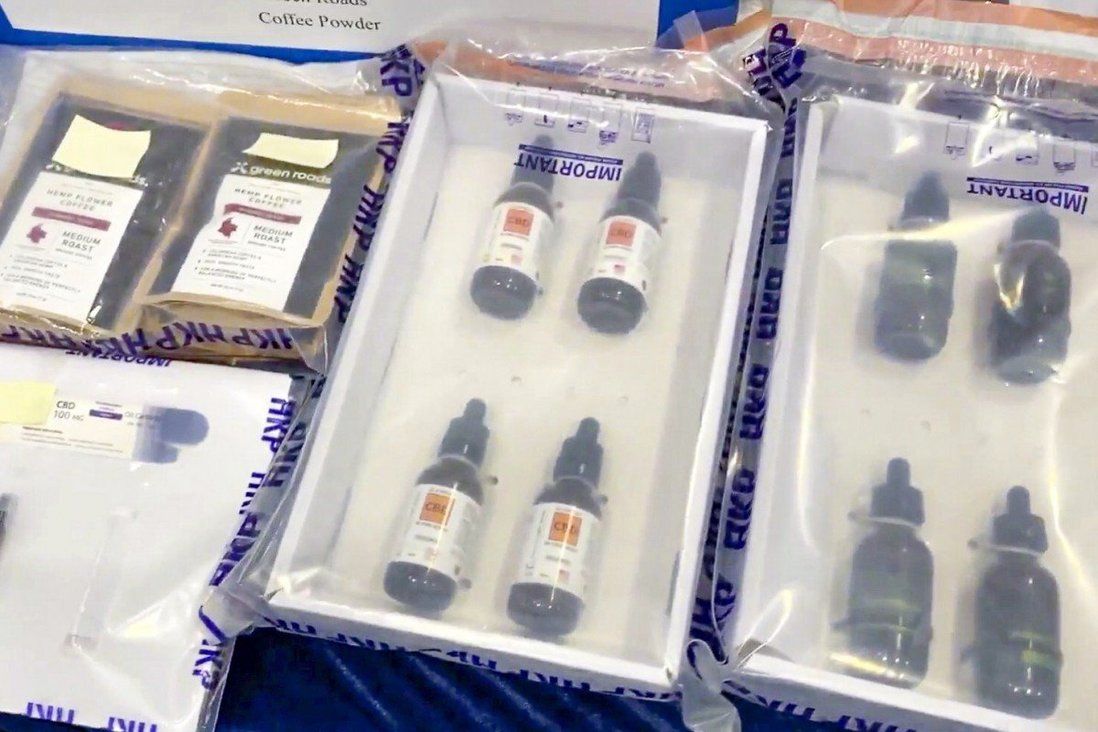 One product, a brand of coffee powder, was even found to openly list THC as one of its ingredients.

Hong Kong police arrested eight people and seized 1,500 CBD items in a citywide operation on Tuesday after the goods were found to contain an illegal, high-producing substance present in marijuana.

Officers collected 50 different products made with CBD – or cannabidiol, a substance derived from cannabis and its close relative, hemp – from vendors around the city, including vaping oil and coffee powder, and sent them off for testing between November 18 and 25.

Of those 50, five have been found so far to contain tetrahydrocannabinol, or THC, the active ingredient in marijuana, which is illegal in the city and associated with certain health risks. Following the tests, officials returned and seized 1,500 CBD products from nine stores on Tuesday.

“We even found that THC was labelled in the ingredient list on the package of the coffee powder,” said Superintendent Chan Kong-ming of the narcotics bureau.

The products that contained THC were mostly imported from the US and Canada, he said, but further investigation was needed as to how the coffee powder that clearly listed THC as an ingredient was imported to Hong Kong.

Six men and two women, aged 19 to 41, who owned or worked at the shops in question were arrested and remanded in custody. Police did not rule out the possibility of further arrests.

The seized products ranged in value from several hundred to thousands of Hong Kong dollars.

Asked how much THC was found in each, the bureau’s acting chief superintendent, Ng Wing-sze, said the government had zero tolerance for any amount of the substance, and urged importers to take responsibility for ensuring the products they supplied did not contain drugs.

“Some of the CBD products did not state that they contained THC on their packages. If consumers have any doubt about the products, they should not buy them,” she said. “For those who have already bought the products containing THC, they should contact us through our hotline; we will offer help and seize the products.”

Asked if anyone currently possessing the same products would be seen as violating the law, Chan said it would depend on the details of each case.

“If the person consumes the product without knowing it, he may be found not guilty,” he explained.

Authorities monitored the delivery of the package to the warehouse of a wellness products company in Lai Chi Kok on Tuesday, where a further 409 CBD products, including skincare and pet health supplies, were also seized.

Since March of 2019, the Customs and Excise Department has detected traces of banned drugs in nearly 200 imported CBD products.

CBD is one of the numerous cannabinoids contained in marijuana plants, but is not psychoactive in the same way as THC, and does not have any known potential for abuse. It is legal in Hong Kong only if other prohibited ingredients derived from cannabis, such as THC and cannabinol (CBN), are not present in the products.

THC, the substance in cannabis that produces a high, is illegal under the Dangerous Drugs Ordinance. As CBD is generally extracted from cannabis, it may contain a low level of THC.

THC is associated with adverse health effects including addiction, changes in brain function, impairment and depression, explained Dr Donald Li Kwok-tung, chairman of the Action Committee Against Narcotics, who welcomed the enforcement action amid an influx of CBD products into the market.

Those who import or sell CBD products found to contain THC can be charged with drug trafficking, which is punishable by life imprisonment and a fine of up to HK$5 million. Those who buy or consume such products face a maximum jail term of seven years and a fine of HK$1 million.