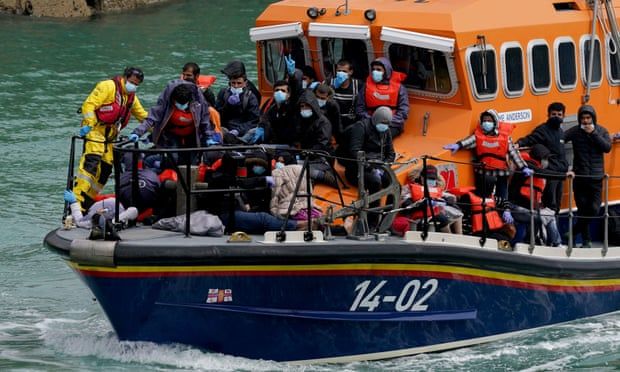 Lawyers say they will challenge Priti Patel over apparent change in processing claims from people crossing the Channel in small boats
Hundreds of people arriving in England in small boats are being immediately detained in immigration removal centres, raising fears of a new, secret Home Office policy to deport them without their asylum claims being properly considered.

Among the detainees are apparent trafficking and torture victims from countries including Vietnam, Afghanistan and Iraq, who would normally be allowed asylum accommodation in the community while their claims are processed but instead are effectively imprisoned.

Children are also among those who have crossed the Channel and have been sent directly to immigration removal centres, with solicitors claiming the Home Office has classed minors as adults despite not age-assessing them in person.

Some small-boat asylum seekers have been denied access to a lawyer since early May after landing and being immediately detained in a removal centre.

Campaigners said the development was “not the act of a civilised and compassionate nation”.

The outcry follows the publication of home secretary Priti Patel’s nationality and borders bill on Tuesday. It claims to reform the asylum system but has been described by the UN as having an “almost neocolonial approach” in allowing the UK to shirk its international responsibilities to refugees.

Immigration lawyers say the apparent undisclosed policy change, which appears to have been introduced over the past two months, is unlawful and they are preparing to challenge it.

Toufique Hossain, director of public law and immigration at Duncan Lewis, described it as a potentially “grave abuse of power”.

Hossain added: “They have effectively started bypassing the asylum system and saying to individuals with strong claims that their claim is weak, that they may not get an appeal and that they intend to remove them quickly.

“The whole starting point is to disbelieve people arriving from places where the Home Office knows individuals have a well-founded fear of harm and persecution.”

The shift appears to have affected hundreds already, with Duncan Lewis receiving reports that the UK’s network of immigration removal centres is overwhelmed.

Harmondsworth removal centre near Heathrow airport – whose capacity is 670 – is understood to be “overwhelmed”. The Home Office is also filling Brook House at Gatwick airport and Colnbrook, near Heathrow - combined capacity 850 – with small boat arrivals.

“Detention centres are being filled with people who have just arrived but who are not being released into the community,” said Tom Nunn of Duncan Lewis.

He added they are aware of more than 50 Vietnamese nationals, a country which is one of the top sources for trafficking into the UK.

In addition, there is speculation that the Home Office has chartered a deportation flight to Vietnam at the end of July for small boat arrivals, although the government would not confirm this.

Nunn said the firm was aware of Iraqis and Afghans who had indicators of torture, but whom the Home Office had apparently detained in contravention of the established asylum process.

“There have been a few cases where medical advice from doctors in the immigration centre is that they are victims of torture,” said Nunn. “But we are seeing a lot of cases where the Home Office is pushing back on this, basically saying that: ‘You’re a victim of torture but we believe we can remove you quickly and therefore we’ll keep you in detention.”

Clare Moseley of charity Care4Calais said: “To detain and deport such vulnerable people in this way is not the act of a civilised and compassionate nation. If we fail to ensure that those who need our help are treated in a fair and decent manner we risk losing our reputation as a decent and honest society.”

Usually asylum seekers are placed in special accommodation while their claims are heard, a process that can often take longer than a year. Currently there is a record backlog of 109,000 cases in the system with over 79,000 being processed for more than a year.

This is not the first time that the Home Office appears to have quietly introduced measures that reduce the rights and protection of asylum seekers.

Last year the Home Office secretly shortened asylum screening interviews for arrivals in the UK, a move that meant torture and trafficking victims could be deported far more quickly.

Last week, however, the high court ruled that Patel should quickly bring back to the UK a small boat asylum seeker and Sudanese torture survivor who was removed to France.

The 38-year-old was tracked down by Liberty Investigates and the Observer in an investigation whose evidence paved the way for last week’s government defeat.

Called Omar in the investigation, he had nine of the 11 indicators of trafficking and torture yet was deported to France last August after just two months in the UK.

A Home Office spokesperson said: “We assess the suitability of all new arrivals and only detain people when there is a realistic prospect of their removal within a reasonable timescale, and evidence of their vulnerability is outweighed by immigration considerations.

“It is inaccurate to say unaccompanied minors are being classed as adults during age assessment interviews. The Home Office makes every effort to ensure people’s age is assessed correctly, in the interests of safeguarding and to avoid abuse of the system.”

They added that the government would “crack down on illegal entry and the criminality associated with it”.

The spokesperson said: “People should claim asylum in the first safe country they arrive in and we must ensure dangerous journeys are not incentivised.”
#Priti Patel
Add Comment