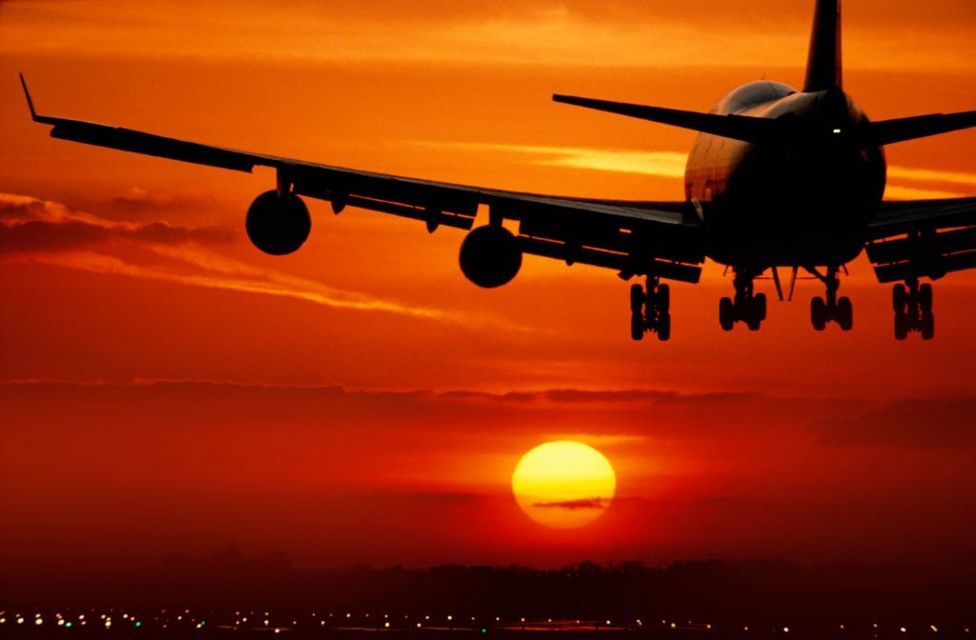 Heatwave: Why is Heathrow so hot?

Provisional figures from The Met Office show that London Heathrow has reached a temperature of 40.2C.

If confirmed, it would be the first time the UK has recorded a temperature of over 40 degrees.

How is temperature measured?

To get a standardised temperature, scientists use a weather station, known as a Stevenson Screen.

These white boxes, which contain a thermometer, are installed 4ft (1.25m) above the ground and are dotted all around the UK.

The weather station at Heathrow is located very close to the northern runway, so do the aeroplanes constantly landing and taking off affect the temperatures recorded?

Not according to Paul Williams, Professor of Atmospheric Science at the University of Reading. 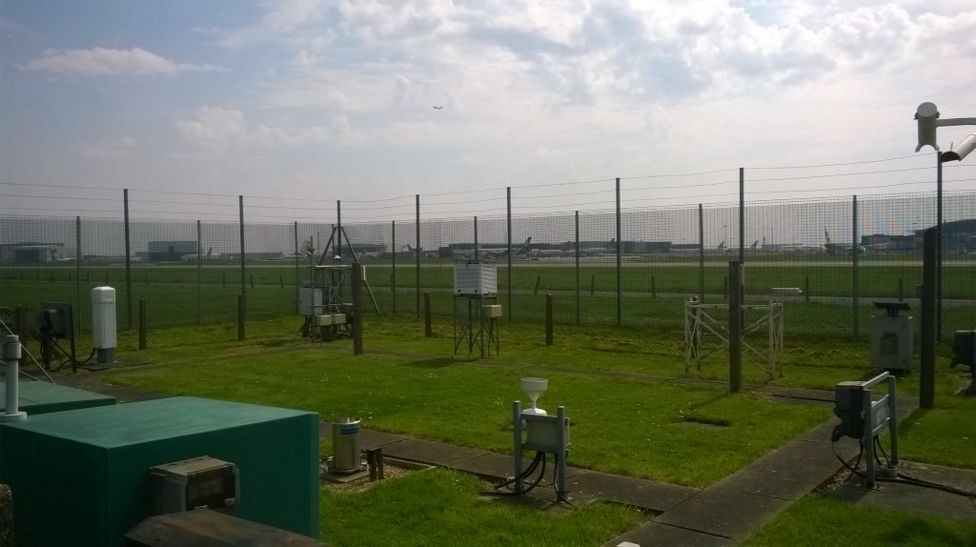 "Every time you use energy - whether it's from a plane's engine, or even just switching on a light bulb or taking a shower - it's eventually turned into heat.

"But all of that is a minor influence compared to the effect of the urban heat island."

Cities tend to hang on to the heat for longer, which can push up temperatures by a few degrees, he says. 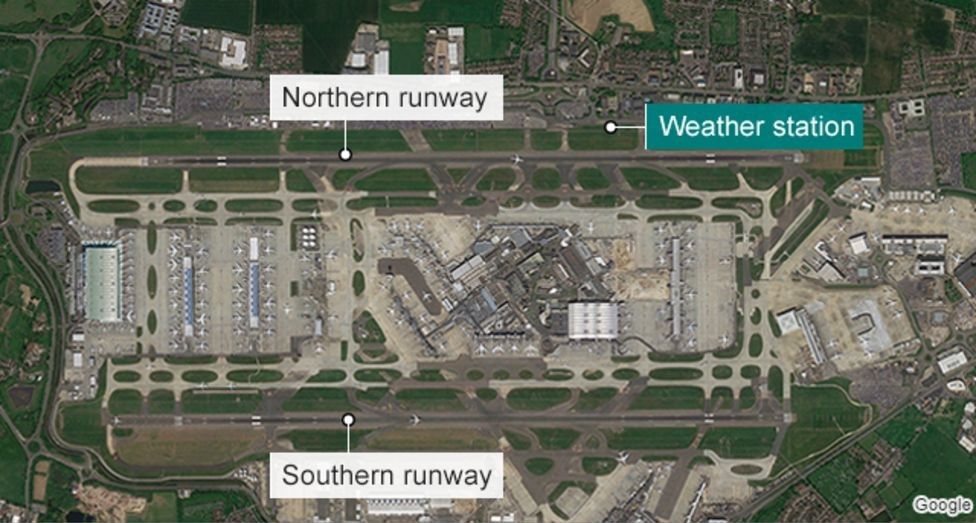 Heathrow's weather station is located close to the northern runway

The airport is based in London, which is also very built-up, and so the urban heat island also affects surrounding areas.

If you compare Heathrow to nearby Kew - which is eight miles away - there is hardly any temperature difference between the two. 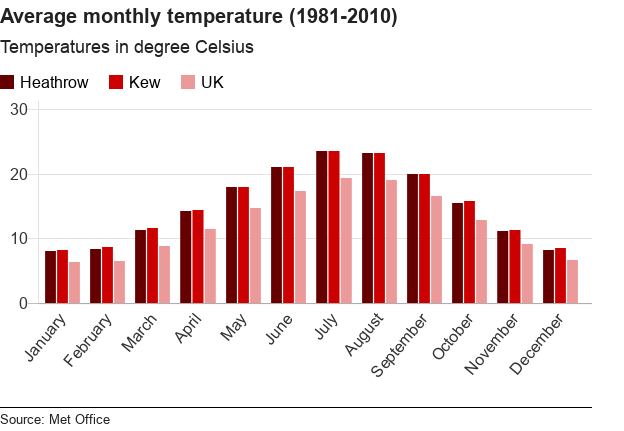 Both areas are hotter, on average, than the rest of the UK. This suggests the urban heat island contributes to higher average temperatures.

But what about carbon dioxide (CO2) gas levels expelled by the planes?

Prof Williams says CO2 is a greenhouse gas and does trap heat but, because it mixes very quickly with the air, it warms the entire climate, not just Heathrow.

"If you measure the CO2 levels above Heathrow they wouldn't be any higher than other parts of the UK because it spreads so quickly," he says.

The Met Office told the BBC that its weather stations are built to very specific standards and any biases that could affect temperature records are taken into account when analysing readings.

It also pointed out that Heathrow is many miles from the sea, which means it doesn't benefit from a cooling effect that many coastal areas receive.

When you look at overall records, it says there is a pattern between high temperatures and the distance from the sea. 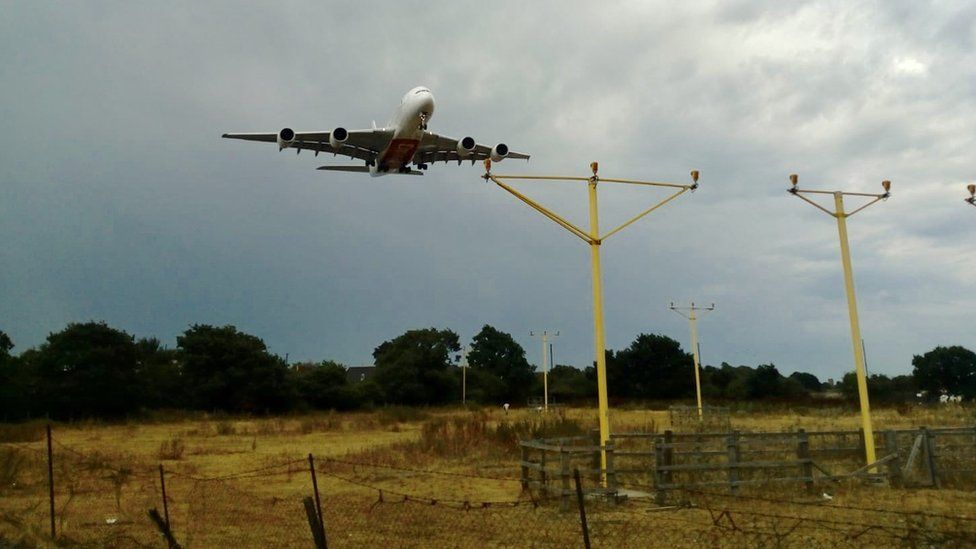 Provisional figures show Heathrow has reached a temperature of 40.2C.

Even the soil can be a factor, according to Gareth Harvey from the BBC Weather Centre.

"Take another very warm spot, like Wisley - located in the Surrey heathland and typified by sandy soils," he says.

"Sand is a natural insulator and so the heating effect of sunshine is stored in the top layer only, which gets very hot and then warms the air."

In summary, the overall temperature of any particular weather station is likely to be affected by several factors - including: the amount of tarmac, the number of buildings, distance from the sea and even the type of soil.

So, there's more to Heathrow's hot spot than its proximity to roaring jet engines.

How is temperature measured?