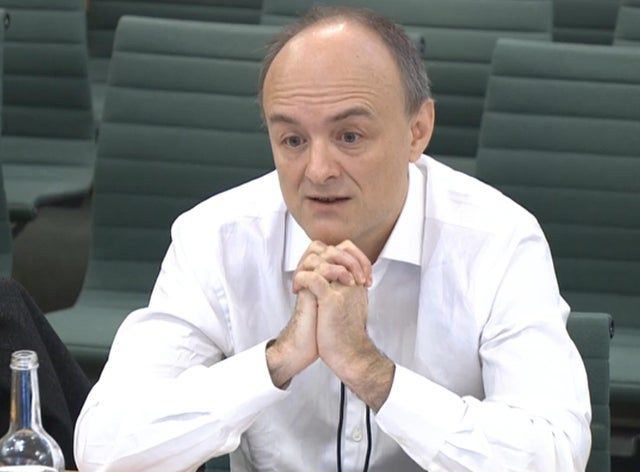 The prime minister's former aide, Dominic Cummings, has criticised the Department of Health as "a smoking ruin in terms of procurement and PPE" at the start of the pandemic.

He said that was why Boris Johnson had taken direct control of the vaccine programme.

He also told MPs Mr Johnson approached him about working in Downing Street the week before he took office.

He said he asked him to "help sort out the huge Brexit nightmare".

Mr Cummings said he agreed but one of his preconditions was that science funding should be doubled.

He was giving evidence to MPs on the Science and Technology Committee about the creation of the Advanced Research and Invention Agency know as Aria.

But in his first public appearance since leaving office, he also criticised the health department's response to the pandemic.

He said: "In spring 2020 you had a situation where the Department for Health was just a smoking ruin in terms of procurement and PPE and all of that, you had serious problems with the funding bureaucracy for therapeutics on Covid."

He said the government's chief scientific adviser, Sir Patrick Vallance, had advised Number 10 that the vaccine rollout should not be run out of the Department for Health and that a separate task force should be created.

"We had to have it authorised very directly by the prime minister and say strip away all the normal nonsense that we can see is holding back funding."

But a source at the health department told the BBC's chief political correspondent Adam Fleming that getting the vaccine programme established was a "massive team effort".

They added: "Everyone in DHSC was and is spending their time focused on saving lives, expanding the world leading vaccine rollout and getting through this pandemic."

The Vaccine Taskforce is a team of almost 200 people at the Department for Business that was established to make sure the UK got promising vaccines.

Mr Cummings said as the country emerges from lockdown there needs to be an "urgent very, very hard look" by Parliament at "what went wrong and why" during the pandemic.

"One of the most obvious lessons is the incredible value potentially of getting science and technology stuff right, the disaster that can come if you don't get it right."

It was this "horrific Whitehall bureaucracy" he wanted to strip away when he championed the new "high risk" Aria scientific research agency, he told MPs.

He said: "The prime minister came to speak to me the Sunday before he became prime minister and said: 'Would I come in to Downing Street to try and help sort out the huge Brexit nightmare?'.

"I said, yes, if first of all you are deadly serious about actually getting Brexit done and avoiding a second referendum; secondly, double the science budget; third, create some Aria like entity, and fourth support me in trying to change how Whitehall works and the Cabinet Office works because it is a disaster zone. And he said 'deal'."

Answering MPs' questions about science funding, Mr Cummings said scientists had been lobbying for the creation of a body such as Aria that would have "extreme freedom" but he said he was aware that this was "completely hostile to normal bureaucracy".

The government says Aria will fund "high-risk, high-reward" scientific research and "help to cement the UK's position as a global science superpower".

It will be run along the lines of US equivalents that were instrumental in the creation of the internet and GPS.

Aria, which has £800m funding over four years, will have a "higher tolerance for failure than is normal", ministers say.

But the amount of funding it will get is a fraction of the money pumped into existing government research bodies such as UK Research and Innovation (UKRI).

For 2020-21, the government has allocated £10.36bn for its research programmes and bodies.

Labour said there needed to be greater transparency around how the agency would operate.

Labour MP Dawn Butler, who sits on the science committee, said because Aria was exempt from freedom of information requests this would undoubtedly "raise alarm bells" about how taxpayers' money would be spent given "the recent PPE scandals".

He added he would be responsible for reporting to Parliament on Aria and that the agency would have to submit accounts that would be scrutinised by MPs.

"I think there will be a great deal of transparency and oversight," he added.

At the start of the hearing, chair Greg Clark said Mr Cummings had agreed to give evidence on the Covid pandemic to a joint inquiry by the science and health committees.