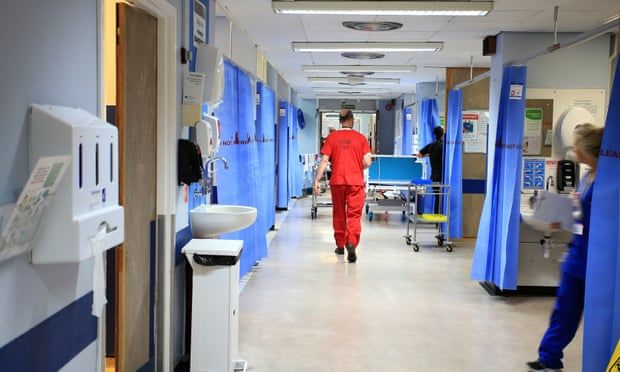 Ministers have been issued with a stark warning over mandatory Covid vaccines for NHS workers in England, with a leaked document saying growing evidence on the Omicron variant casts doubts over the new law’s “rationality” and “proportionality”.

Two jabs will become compulsory for frontline NHS staff from 1 April after MPs voted on the legislation last month.

But the document, drawn up by Department of Health and Social Care (DHSC) officials and seen by the Guardian, said the evidence base on which MPs voted “has changed”, creating a higher chance of objections and judicial review.

The effectiveness of only two vaccine doses against Omicron, and the lower likelihood of hospitalisations from the milder variant, are cited.

More than 70,000 NHS staff – 4.9% – could remain unvaccinated by 1 April, the document says. NHS trusts in England are preparing to start sending dismissal letters from 3 February to any member of staff who has not had their first dose by then. 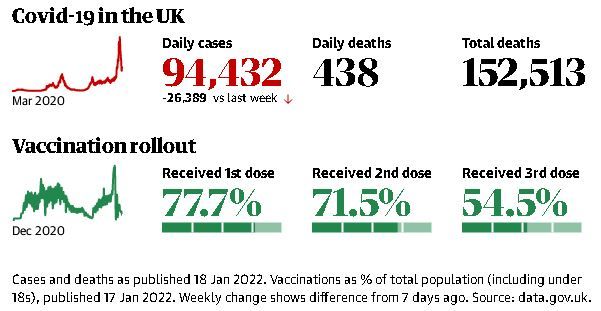 Amid significant pressures on the NHS, last week groups including the Royal College of Nursing urged Sajid Javid, the health secretary, to delay the legislation, known as “vaccination as a condition of deployment” (VCOD2). An earlier VCOD1 rule applied to care workers and came into force on 11 November.

On Tuesday the Royal College of Nursing said the leaked memo should prompt ministers to call a halt to the imposition of compulsory jabs, which it called “reckless”.

“The government should now instigate a major rethink”, said Patricia Marquis, the RCN’s England director. “Mandation is not the answer and sacking valued nursing staff during a workforce crisis is reckless.”

NHS trusts should be left to continue their efforts to persuade vaccine-hesitant staff to get jabbed and not have to dismiss much-needed staff, she added. “Vaccines against Covid-19 are safe and effective and the vast majority of staff have been fully vaccinated. Encouraging people to get vaccinated is the best way to boost take-up and nursing staff have a key role to play in addressing any concerns people may have.”

Some exemptions are allowed but the mandate has infuriated dozens of Tory MPs, with 61 voting against extending the mandate to NHS staff in December.

The document prepared by DHSC officials noted that two vaccine doses provide up to 32% effectiveness against Omicron infection, which wanes to in effective zero 20 weeks later.

At the time the policy was developed, two-dose effectiveness against infection with the Delta variant was substantially higher – 65% with Oxford/AstraZeneca and 80% with Pfizer/BioNTech, the DHSC memo said.

Booster jabs have since been shown to be highly effective but are not part of the law for NHS workers.

The document says: “While Omicron is more transmissible there appears to be a substantially lower risk of hospitalisation and mortality for those vaccinated vs Delta.

“The low VE [vaccine effectiveness] against infection (and consequently effect on transmission) plus the lower risk posed by Omicron brings into question both the rationality of the VCOD2 policy and its proportionality and makes the case for vaccination requirement weaker than when [ministers] decided on the policy.

“The evidence base on which MPs voted on VCOD2 has now changed and we may see more objections from MPs, increased media interest and higher likelihood of judicial review.”

Work is under way with the UK Health Security Agency “to pull together evidence” for Javid to advise on “appropriate next steps” on the policy and “the inclusion of boosters”, the document adds.

Some Tory MPs are likely to use the advice to ministers to push for the policy to be dropped. Mark Harper, the chair of the Covid Recovery Group, said: “Forcing NHS and social care staff to get vaccinated or get the sack wasn’t a sensible policy in December, when I and many of my backbench colleagues voted against it.

“Now we’ve learned more about both vaccine efficacy against Omicron transmission and its severity, it looks increasingly foolish.

“Ministers would be wise to rethink the policy and avoid putting even more pressure on our NHS by sacking tens of thousands of health and social care workers in the next few weeks. When you know something won’t work, it’s right to change course.”

Hospital bosses have voiced rising concerns that they may have to close entire units and send patients elsewhere for treatment because the enforced dismissal of unvaccinated staff means they cannot run safely. There is particular concern about maternity units as hospitals are already 2,500 midwives short.

Matthew Trainer, the chief executive of Barking, Havering and Redbridge NHS trust in London, said last week that the loss of unvaccinated midwives, coupled with the fact that it already had a 10% vacancy rate among those specialists, “would put us in quite a serious position”.

But the DHSC has dismissed any prospect of a delay. A DHSC spokesperson said: “Health and social care workers look after the most vulnerable people in society, who could face serious health consequences if exposed to the virus. Ensuring staff are vaccinated is the right thing to do to protect patients and those in care. The vast majority of NHS staff have had the vaccine which is our best defence against Covid-19.”

A senior NHS official said: “Some staff seem to think the government will back down. But when they realise that they won’t then they’ll have to get jabbed or lose their jobs. Some can be redeployed but many won’t be able to.” With the deadline for first doses just over two weeks away, “it’s a case of who blinks first” between Javid and unvaccinated staff, the source added.

mike 324 days ago
breaking news
The British will abolish the mask requirement from January 27th. Most coronavirus restrictions in England are being lifted.

The government in Spain has announced that it will treat the omicron variant like flu in the future.

mike 324 days ago
The quacks in the Middle Ages used people's fears to attack people with all sorts of miracle cures, which, however, were generally completely useless (if not poisonous).

Quack doctors were untrained and therefore often denounced as "charlatans".
A charlatan is a person who pretends to have certain knowledge or skills in order to gain money, fame or other advantages.

They still exist today and many of them seem to hang around in the Department of Health and Social Care (DHSC).