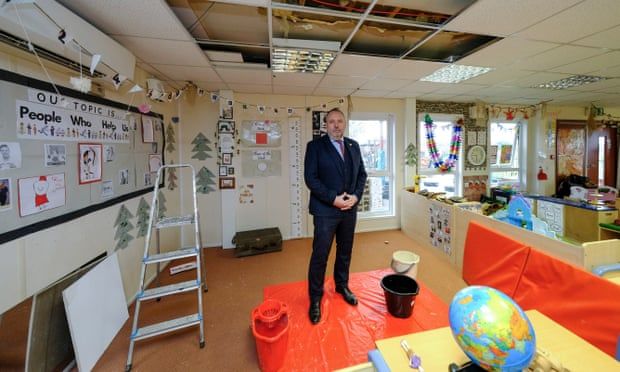 Headteachers fight for funds to shore up England’s dilapidated classrooms

Hundreds of schools are queueing for cash to replace leaky roofs and failing heating. Yet each year only 50 will get money to rebuild
When it rains, the pupils at Wales high school, south Yorkshire, know to look out for numerous obstacles as they move around the building - buckets, lots of buckets.

“On a rainy day, it’s commonplace to see a dozen buckets around the school,” said headteacher Pepe Di’Iasio. “You can’t do anything long term. We’re just patching over the roof and doing the various things that we can. We have flat roofs, asbestos throughout the place and an old energy system that uses heavy amounts. We have a building that we heat up every day and the heating goes straight up out of the roof.”

Inspectors have told him that his school, in Kiveton Park, near Rotherham, is among the bottom 200 in terms of its condition. Yet with only 50 schools accepted for the government’s school rebuilding plan each year, most of those will have to wait.

“When you consider the increased energy costs at the moment, that’s waiting another year when energy costs have increased by over 100% and students are in inadequate buildings,” Di’Iasio said.

When the Labour MP for York Central, Rachael Maskell, visited a local outstanding school, she was amazed at what she was shown. Education at All Saints Roman Catholic school is highly regarded, but Maskell was left in no doubt that it was no environment for teaching.

“Music takes place in an old aircraft hangar, which is freezing cold or boiling hot in the summer,” she said. “You’ve got the gym, where feet are going through the floors. There are issues with water ingress. It’s a place with a fantastic history, but for a modern school today, it doesn’t serve that purpose.”

The school is also among those to have made a bid for funding. Yet while a lucky few will be successful, it is now clear that both teachers across the country and figures within Whitehall believe a far bigger pot of money is needed.

Education figures track the problems back to big cuts to the budgets for school buildings back in 2010.

“When I took over 13 years ago, we had real problems,” said Paul Gosling, headteacher at Exeter Road community primary school in Exmouth, Devon. “We had a pitched roof and water running down three of the classroom walls when it rained.

When water started running over electricity boxes and the school sought help from the local MP, it was granted funds for rebuilding work, which was finished last year. But as regional branch secretary of the National Association of Head Teachers, he is aware of many other schools that haven’t been so lucky.

“One school has three temporary classrooms that are rotting and falling apart, and not fit for 21st century education. Devon has a stock of 300-odd schools. In a two-year period, we were only one of four schools getting that sort of major investment. There’s no way that system of pooling the money is going to address the needs that we’ve got. There are many schools that are falling into some real disrepair.”

The bill for school repairs certainly seems to be growing. Last year, an official audit found that schools in England face a repair bill of more than £11bn, almost double some previous estimates.

Several teachers also pointed out that the current system for funding repairs was inefficient. Schools often spent money patching up their buildings, shortly before they were finally granted funding for a rebuild. They said schools should be told about funding awards further in advance.

Maskell said that she was aware of other schools in her constituency facing similar problems to All Saints. She, too, said that spiking energy costs were making the situation even more urgent.

“All Saints is a fantastic school. It does remarkably well and has a reputation for caring and supporting its pupils. You just think, if it had a decent school environment, too, what more could be achieved there,” Maskell said.
Add Comment