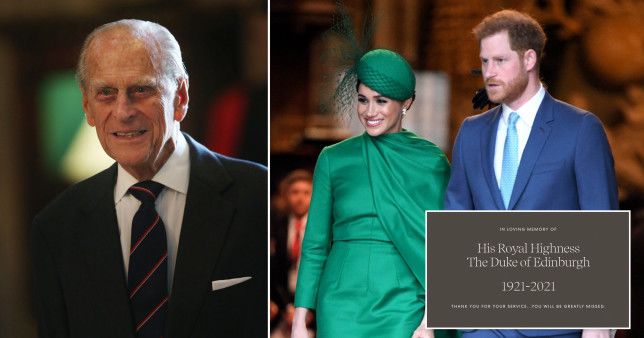 A message on their Archewell website reads: ‘In loving memory of His Royal Highness The Duke of Edinburgh. 1921-2021. Thank you for your service… you will be greatly missed.’

The couple, who are expecting their second child, are the first members of the Royal Family to release a separate statement. They have removed all other information from their website.

The Duke of Edinburgh passed away ‘peacefully’ at Windsor Castle this morning.

He will not receive a state funeral, but instead lie in rest at Windsor Castle before a ceremony at St George’s Chapel, in line with his wishes.

The Duke of Sussex is believed to be planning on flying back to the UK from the US to attend the ceremony.

His wife the Duchess of Sussex is likely to check if it is safe for her to travel while pregnant before making a decision on the trip, according to a report. It’s thought the new royal baby is due in the spring or summer.

A source close to the family told MailOnline: ‘Harry will absolutely do his utmost to get back to the UK and be with his family. 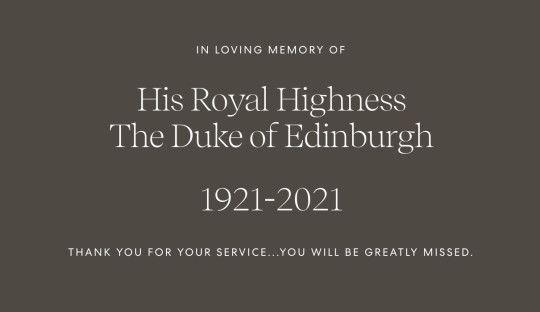 ‘He will want nothing more than to be there for his family, and particularly his grandmother, during this awful time.

‘Meghan is obviously pregnant so she will need to take advice from her doctors about whether it is safe for her to travel, but I think Harry will definitely go.’

The College of Arms has asked the public not to attempt to attend the funeral amid concerns about the spread of Covid-19.

Given his status as a member of the royal family travelling to support the Queen, Harry may be considered exempt from Covid travel restrictions.

His return to England will come after the couple made serious allegations in a tell-all interview with Oprah Winfrey.

They have accused an unidentified member of the Royal Family – not the Queen or Prince Philip – of ‘raising concerns’ about how dark their son Archie’s skin might be when he’s born.

Meghan also revealed she had suicidal thoughts during her time in England, and accused ‘the firm’ of refusing to help her.

Buckingham Palace said the whole family was ‘saddened’ by the ‘serious allegations’ which will ‘be addressed by the family privately’ – but added that ‘recollections may vary’.