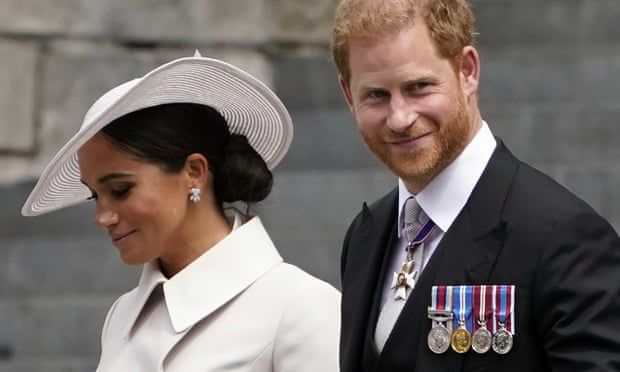 Finding Freedom author, recently revealed to have been informed by a briefing from a senior aide, promises follow-up boasting ‘deep access’
Journalist Omid Scobie will publish a follow-up to his bestselling book Finding Freedom, an unofficial biography of Meghan Markle and Prince Harry.

Scobie, who co-authored Finding Freedom with journalist Carolyn Durand, has yet to reveal the title of the second book, which is due out next year.

Its UK publisher HarperCollins said the book will focus on “a new chapter of the royal story and feature unique insight, deep access and exclusive revelations”, and will “have the world talking”.

Finding Freedom, which was a hit in both the UK and the US, was described in its blurb as an “honest, up-close, and disarming portrait of a confident, influential, and forward-thinking couple who are unafraid to break with tradition”.

While it has come to light that Meghan, the Duchess of Sussex, authorised a senior aide to brief Scobie and Durand for the first book, there is so far no indication that the Duke and Duchess of Sussex will be involved in this second volume.

Reviewing Finding Freedom for the Guardian, Hadley Freeman wrote that “given the deluge of personal minutiae – from Harry’s emoji habit to Meghan’s favourite hair highlight shades – as well as their litigiousness when it comes to undesired invasions of privacy”, the claim that the Duke and Duchess of Sussex were not involved did not seem credible.

In her review, Freeman wrote: “The Sussexes were hung out to dry by the palace and the press; the question the book fails to answer is why, when they were such a boon to the brand … Finding Freedom has the space to respond to every other media claim, but on this it stays schtum.”

Scobie is executive editor (Royals) at Yahoo News UK and editor-at-large at Harpers Bazaar US. The book is among a number about the Duke and Duchess of Sussex being published in the coming year.

It is expected that Prince Harry’s own memoir will be out later this year, although it currently has no title and no official release date. Publisher Penguin Random House, when it announced the book in summer 2021, said it was “tentatively scheduled for late 2022”. Prince Harry said he was writing the book “not as the prince I was born but as the man I have become”, and described it as “a first-hand account of my life that’s accurate and wholly truthful”.