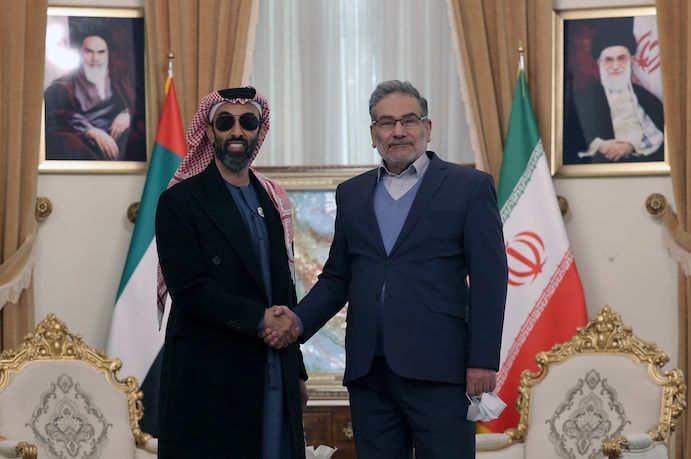 The engagements with their longtime foe are driven by a desire to avoid getting caught up in a regional conflict should negotiations to restore the 2015 nuclear deal fail.
Persian Gulf countries that once vociferously opposed the nuclear deal with Iran now say they support its revival, even as they have embarked on their own efforts to engage with Tehran during a period of uncertainty about U.S. staying power in the region.

The Biden administration has expressed approval of what one senior official described as a “quite striking” about-face, and credited it in large part to U.S. diplomatic outreach.

The official pointed to a statement issued last month after talks between the United States and the six-member Gulf Cooperation Council that urged a “mutual return to full compliance with the JCPOA.” The 2015 Joint Comprehensive Plan of Action between Iran and world powers began to fall apart when President Donald Trump withdrew the United States from the pact.

But while regional governments share the administration’s desire to prevent Iran from developing nuclear weapons, their enthusiasm for removing sanctions varies. And any change in their perspective, according to regional officials and experts, has as much to do with their unease about Washington as it does with Tehran.

Governments such as Saudi Arabia and the United Arab Emirates worry that failure to achieve a negotiated return to the original terms of the nuclear agreement, in which the United States lifted economic sanctions in exchange for strict limits on Iran’s nuclear activities, could lead to a direct confrontation between the United States and Israel against Iran, in which they would bear the brunt of the conflict.

Their initial belief that the United States would protect them began to dissolve under Trump, who courted their leaders but then seemed to lose interest in them, and it has diminished further under President Biden.

Biden campaigned with a promise that the United States would no longer provide Saudi Arabia with offensive weaponry to prosecute its war against Iranian-backed Houthi rebels in neighboring Yemen, and would exact more of a price for Saudi human rights abuses.

Shortly after he took office, Biden lifted the U.S. terrorist designation of the Houthis, and promised to reinvigorate efforts to negotiate a settlement in the war.

Those negotiations have achieved little so far. Last week, renewed Houthi missile and drone attacks on Saudi territory were hailed in Iran, even as the Saudis depleted their stocks of U.S.-supplied ground-launched missile interceptors, and the Senate debated whether to disapprove a proposed administration sale of air-to-air defensive weaponry.

Progress in the U.S. sale of F-35 Stealth aircraft to the Emirates, approved under Trump as an incentive for their establishment of relations with Israel, is now lagging amid disagreements over what sophisticated technology the United States is willing to install in the planes.

“We want to measure twice and cut once,” State Department spokesperson Ned Price said this past week of the pending UAE purchase. “There are still some things to work out.”

The UAE this month signed a $20 billion deal to purchase 80 French fighter planes.

The Gulf Arab states have long been more immediately concerned with Iran’s proxy wars in the region and its development of ballistic missiles that can reach their territory than with its nuclear program. Just as those issues were put aside during the discussions over the original JCPOA, the United States and its partners in the negotiations have said their first priority is to return to compliance with the deal, with hopes to turn to other concerns later.

Iran has said it has no intention of discussing those regional issues at any time.

Due in part to what they see as the lack of immediate U.S. concern about their worries, the regional states have begun a new effort to set aside the decades-old enmities that have helped fuel conflicts among them, officials in the region say.

The most significant engagement came this past week with a visit to Tehran by the UAE national security adviser, Sheikh Tahnoon bin Zayed al-Nahyan, who was received by Iran’s new hard-line president, Ebrahim Raisi. It was the most senior-level encounter between Iranian and Emirati officials in a decade, and marked what one senior Iranian official called “a new chapter” in relations.

“We have taken steps to de-escalate tensions, as we have no interest in a confrontation. The whole region would pay the price of such a confrontation for decades to come,” Anwar Gargash, a senior UAE foreign policy adviser, told the Abu Dhabi Strategic Debate conference ahead of the meeting.

Saudi Arabia has launched its own dialogue with Iran in Baghdad, mediated by the Iraqi government. Those talks are ongoing, although they appear to have made less progress.

The United States welcomes “any direct talks that lead to greater peace and stability in the region,” Jennifer Gavito, the deputy assistant secretary of state for Iran and Iraq, told CNBC in October.

The nuclear agreement, the subject of ongoing negotiations among its signers in Vienna, is not the focus of the Arab talks, however. Arab officials have made it clear that they are not prepared to serve as a conduit for parallel negotiations around the nuclear deal, which could undercut the Vienna process, according to a person familiar with the thinking of Gulf leaders.

Iran requested that they do so but was rebuffed, the person said.

Rather, the Gulf states have decided to independently pursue ways of averting conflict, said Riad Kahwija, a Dubai-based defense consultant.

In addition to Iran, the Emiratis are also reaching out to Turkey and Syria — from which they have been estranged for years — and to Qatar, where they joined with Saudi Arabia in a 2017 Trump-fueled spat that resulted in severed diplomatic relations.

This past week, Saudi Crown Prince Mohammed bin Salman, the de facto Saudi ruler, made a major ice-breaking visit to Doha, the Qatari capital, part of a Gulf-wide tour that some analysts interpreted as a move to solidify Saudi dominance.

The chaotic U.S. withdrawal from Afghanistan, the failure of the United States to respond to Houthi drone strikes against Saudi oil facilities and Riyadh, the Saudi capital, along with signals of disinterest in the Middle East from Washington have all contributed to a sense that Arab countries need to take “preemptive” action, Kahwija said.

“Each country is trying to adopt policies that will secure their own interests,” he said. “They are no longer tying their ship to the U.S. rope, because this ship seems to be floating without direction in its dealings with Iran.”

Although Gulf countries were enraged by the failure of the Obama administration to consult them on the terms of the original JCPOA, they have been somewhat mollified by the extensive regional consultations undertaken by Biden on the revived nuclear talks, said Abdulkhaleq Abdulla, a Dubai-based political analyst.

But their outreach to Iran “is not something American-driven. It’s something the region is investing in regardless of whether there is a nuclear deal or not,” Abdulla stressed. “We no longer take orders from Washington.”

U.S. officials have said that they believe the promise of increased economic relations with others in the region is an incentive to Iran for the Vienna negotiations to succeed. “Many of them are ready to trade with Iran the minute” sanctions are lifted as part of an agreement, said one of several senior administration officials who spoke on the condition of anonymity about the sensitive diplomacy.

But the downside is an increase in U.S. sanctions if the talks go south. Gargash, speaking this past week to the Arab Gulf States Institute in Washington, said that “there are already enough sanctions,” and expressed the hope that Iran would respond to the “new environment” the Gulf States are trying to foster by doing more on regional issues. Iran could be particularly helpful in pushing for a cease-fire in Yemen, he said, while noting he has seen no real progress in that direction.

Still, the Emirati shift has already resulted in a significant revival of its trade with Iran, which plunged after the U.S. withdrawal from the nuclear deal but is now on track to exceed its pre-2018 levels by March, according to trade figures from both countries.

Some of the increased trade suggests that the UAE, a regional banking hub, also appears to be playing a role in helping Iran access foreign currency by facilitating Iranian oil exports to China, said Esfandyar Batmanghelidj, who heads the London-based Bourse and Bazaar think tank and is a visiting fellow at the European Council on Foreign Relations. Although the moves technically violate U.S. sanctions, the Biden administration appears to have turned a blind eye, he said.
#Donald Trump  #Afghanistan
Add Comment