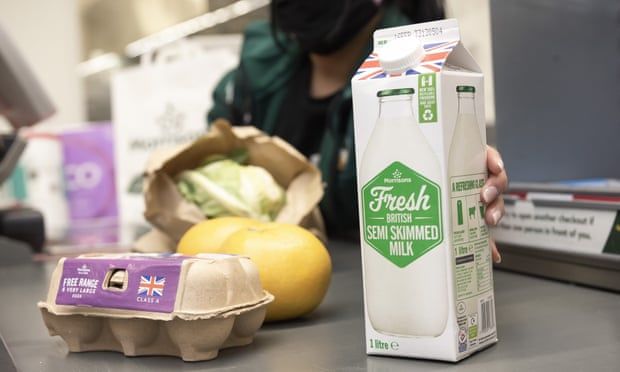 Food price inflation climbed to 4.3% in February as Ukraine conflict deepened cost-of-living crisis
Grocery prices rose at their fastest rate in more than eight years in February, according to the market analysts Kantar, which predicted the squeeze on shoppers would continue as a result of supply-chain disruption and the conflict in Ukraine.

Food price inflation hit 4.3% last month, the highest since September 2013, as the price of savoury snacks, fresh beef and cat food increased the fastest. However the cost of some products, including bacon, beer, and spirits fell.

Britain’s households have been grappling with a cost-of-living crisis, after the annual inflation rate hit 5.5% in January – a near 30-year high. Even before Russia’s invasion of Ukraine, economists had predicted more pain in April when household energy bills would soar.

Fraser McKevitt, the head of retail and consumer insight at Kantar, said: “Apart from the start of the pandemic, when grocers cut promotional deals to maintain availability, this is the fastest rate of inflation we have recorded since September 2013.

“Added to this, ongoing supply-chain pressures and the potential impact of the conflict in Ukraine are set to continue pushing up prices paid by consumers.”

Higher prices and the end of Covid restrictions in England were having an impact on consumer behaviour, the data showed, as shoppers chose more own-label products than branded items for the first time in three months.

Aldi and Lidl were benefiting from more visits to their stores, and were the fastest-growing retailers during the 12 weeks to 20 February. Their sales increased by 3.3%; an extra 1.3 million customers shopped at Aldi compared with 2021, while almost 1 million more people visited Lidl.

Lidl’s sales boost enabled it to overtake Co-op to become the UK’s sixth-largest grocer, meaning both discounters were now among the top six supermarkets, behind Tesco, Sainsbury’s, Asda and Morrisons.

Overall sales at supermarkets fell last month, and households spent on average £26.07 less at grocers, as the economy began to open up after the pandemic and consumers returned to buying more food on the go, purchasing sandwiches or snacks for their lunch break, or enjoying meals out at restaurants and cafes. As a results, shoppers were filling their trolleys with fewer items to consume at home.

Despite this trend, sales at the biggest grocers were higher than before the Covid crisis.

McKevitt said: “Supermarkets with a strong food-on-the-go offering will have enjoyed an added boost that is not reflected in the numbers as people picked up sandwiches, snacks and drinks while out and about again,”

The return to work and socialising after Covid had led more consumers to return to supermarkets. Kantar reported that online grocery sales had fallen by 20% in February compared with a year earlier, as 835,000 fewer people bought groceries online.

However bad weather, including storms Dudley and Eunice, which hit the UK in February, kept many customers away from stores, and there were almost 7m fewer shopping trips during the week ending 20 February.

On 18 February, when a rare red weather warning meant people in Wales and south-west England were advised to stay at home, Kantar reported a 25% drop in footfall compared with the same day in 2021, as many schools, businesses and train stations were closed across the UK.
#Covid
Add Comment