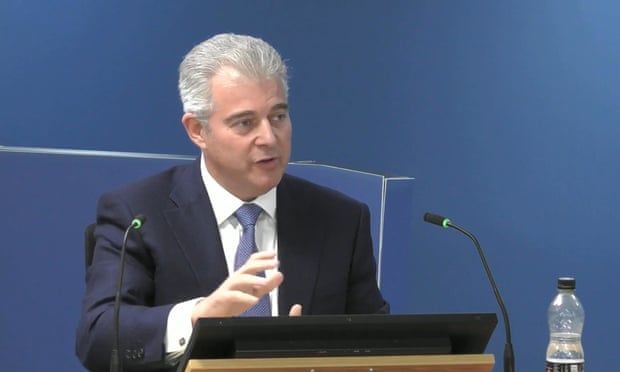 Brandon Lewis is first government to give evidence at inquiry in London
Calls to regulate against the potential incompetence of people who check fire risks in buildings before the Grenfell Tower disaster were dismissed by government ministers because of an “ideological” aversion to increasing red tape, the public inquiry has heard.

Two coroners investigating earlier fire fatalities, the London fire brigade commissioner and the government’s own chief fire adviser were among experts who asked ministers to toughen scrutiny of fire risk assessors, according to testimony heard during cross-examination of Brandon Lewis, the first government minister to give evidence.

The inquiry heard ministers were urged to tighten rules on seven different occasions in the decade before the fire. It has since emerged that the fire risk assessor hired by the Grenfell Tower landlord to check the disastrous refurbishment works was not qualified to say the cladding complied with regulations.

Carl Stokes made up letters after his name to suggest professional registrations that either did not exist or he did not have. He wrongly concluded the combustible cladding was “fire rated” in a move an expert to the inquiry called “professionally reckless”.

Lewis, who was the minister responsible for fire safety from 2012 to 2014 and for fire services from July 2016 to June 2017, had been warned in writing about the competence of commercial fire risk assessors and how a lack of accreditation means “that in effect anyone can offer their services”.

The inquiry heard that a coroner investigating six deaths from the Lakanal House high-rise fire had warned ministers in 2013 to clarify uncertainty about the scope of inspections. In 2016, another coroner investigating the death of a firefighter, Stephen Hunt, found inadequate fire risk assessments contributed significantly to his death. They told the government to ensure fire risk assessors were properly trained and accredited.

“Yes,” said Lewis, adding: “We were always looking at how we could devolve power from central government.”

Kinnear put it to Lewis the government had an “ideological presumption” against regulation.

“It wasn’t just an ideological thing around devolving, it was also around what practically was making the difference,” Lewis said.

They face questioning over claims Conservative-led governments prioritised a “bonfire of red tape” over safety. In 2012, the then prime minister, David Cameron, resolved “to kill off the health and safety culture for good”.

The inquiry has already heard from an official in the department of communities and local government, Louise Upton, that there was a “political predisposition against further statutory intervention in this field”.

Lewis agreed in the sense “we would also look at [whether] you require statute to achieve what you want to achieve”. But he added: “We had a fairly strong record … of being very, very serious about the work we were doing to ensure fire safety.”

In July 2013, government officials tabled a proposal for a national regulator for fire safety, but an internal memo recorded that Lewis was “not keen”. He told the inquiry he didn’t want to “create another layer of regulation that doesn’t deliver anything meaningful”.

Ministers wanted a “self-governing sector”, a government memo showed. It warned: “The government’s policy of standing back to allow the sector to fill the space vacated by government is risky.” The risks included a threat to the government’s reputation for safeguarding public safety.

The inquiry into the 14 June 2017 fire, which claimed 72 lives, continues.
Add Comment