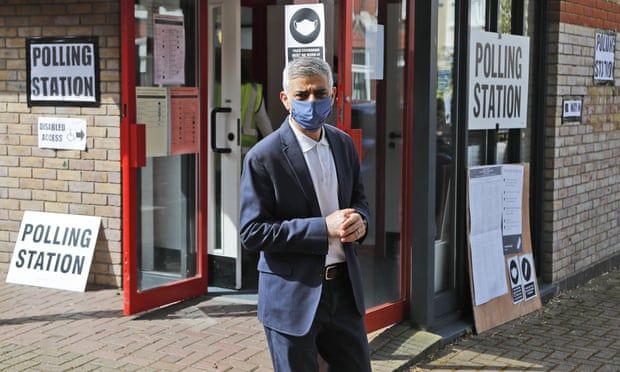 The UK home secretary, Priti Patel, has already unveiled plans to switch all future English mayoral elections from the existing supplementary vote system – in which the public ranks their two favourite candidates – to the first past the post system used in elections to the House of Commons.

Prof Tony Travers, of the London School of Economics, said analysis of Thursday’s polls suggested this change could open a potential route to victory for the Tories in cities such as London.

“It’s likely that first past the post would make it somewhat easier for the Conservatives to win if they could come up with a really good candidate,” he said.

Labour’s Sadiq Khan won the London mayoral contest comfortably against his Conservative rival, Shaun Bailey, once voters’ second preferences were taken into account. But Khan beat Bailey by only 40% to 35% on first preference votes, as some leftwing former Labour voters shifted to the Greens and other smaller parties.

Travers said Labour faced the joint challenge of finding a message that lets them take on the Conservatives at a national level while also stopping leftwing voters in major cities moving to the Greens.

“We’re back to the usual problem of the fragmentation of the left, while the centre-right vote is much better at holding itself together,” he said.

Despite Labour’s dominance in London, there are signs that the decades-long Conservative decline in the capital may have been arrested or gone into reverse. In some areas of the capital, Bailey outperformed Khan on first-preference votes, while the Tories have also been buoyed by growing support from Hindu and Sikh communities.

The government will have to pass fresh legislation to change the voting system, which would also affect elections for police and crime commissioners. Labour has pledged to oppose the changes but the Conservatives have a large majority in the Commons and the party is expected to rely on a vague manifesto commitment to the first past the post system as a justification to push it through the Lords.

Although Labour won most mayoral elections across England easily – with Andy Burnham receiving a landslide 67% of votes in Greater Manchester – under the new voting system it would be likely to lose others such as the Cambridgeshire and Peterborough mayoralty.

There is evidence that voters are confused by the use of the supplementary vote system. Almost 5% of ballots cast in this year’s mayor of London election were rejected, mainly because voters had voted for too many candidates.

Conservative candidates won two of the mayoralties that held elections on Thursday: Andy Street in the West Midlands and Ben Houchen with a landslide in Tees Valley.

Street and Houchen narrowly won against the odds in traditional Labour-voting areas when their positions were first contested in 2017. However, this week both candidates were reelected with substantially increased majorities, having trumpeted their ability to win funds for their local area from a central Tory government in Westminster.