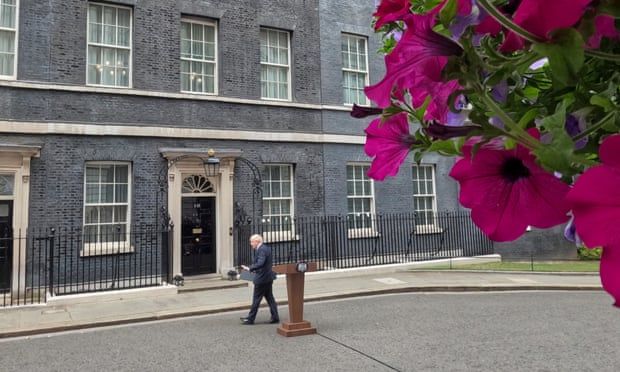 Gone but not gone: Boris Johnson quits but clings on to power

Prime minister dramatically announces his intention to quit role but signals he hopes to stay in post for months to come
Boris Johnson dramatically quit as prime minister after a mass walkout of MPs finally sealed his fate, signalling an end to one of the most divisive and turbulent periods in British politics.

In a speech outside Downing Street on Thursday that was tinged with bitterness, he blamed ministers for turning on him but expressed neither regret nor contrition for his mistakes.

The abrupt denouement kicked off a scramble among contenders to take over in Downing Street – and demands from some MPs that he go now and not wait until the leadership election has finished.

Johnson told a newly patched-together interim cabinet on Thursday afternoon that no major policies, tax decisions or other changes of direction would be made before the handover to a new leader.

The day of drama at Westminster began with more of Johnson’s ministers quitting in a bid to force him out – including Michelle Donelan, who had taken the job of education secretary just two days earlier.

Johnson rang Graham Brady, chair of the backbench 1922 Committee, early on Thursday morning, and emerged from No 10 at lunchtime to concede publicly that he had lost his party’s support.

His premiership, which will have lasted just three years, was overshadowed by the catastrophic Covid crisis, and marred by persistent claims of sleaze, which saw two ethics advisers resign.

But in his speech, delivered as his wife, Carrie, stood nearby holding their young daughter, Johnson called his colleagues’ decision to dislodge him “eccentric”, suggesting they had been driven by a herd mentality.

“In the last few days I have tried to persuade my colleagues that it would be eccentric to change governments when we are delivering so much and when we have such a vast mandate and when we are actually only a handful of points behind in the polls,” he said.

“As we’ve seen at Westminster, the herd instinct is powerful, and when the herd moves, it moves.”

Johnson made no apology for any of the self-inflicted scandals that prompted his party to turn against him, including the hiring of an alleged sexual predator, Chris Pincher, as deputy chief whip.

Instead, Johnson highlighted the “incredible mandate” his party won in the 2019 general election, and policies including the vaccine rollout and the Brexit deal.

His statement followed an extraordinary standoff with his own cabinet. Late into Wednesday evening, his aides were insisting that he would stay and fight despite a delegation of cabinet ministers urging him to go, and scores of frontbenchers resigning.

But as the resignations gathered pace to exceed 50 on Thursday morning, with even Nadhim Zahawi, appointed as chancellor only two days earlier, publicly calling for him to go, Johnson agreed to step aside. Johnson will stay on while another prime minister is chosen.

Zahawi has a well-organised leadership campaign prepared, advised by an ally of the elections guru Lynton Crosby. He has signed up a number of MPs to back him, including a significant tally of those who resigned from government over the past few days, in an effort to demonstrate that he stayed only in the national interest.

Other candidates who were calling MPs over the course of Thursday included Rishi Sunak, the former chancellor, and Sajid Javid, the erstwhile health secretary, who both quit on Tuesday.

But MPs say another well-organised campaign belongs to Tom Tugendhat – now considered the favourite of the Tory moderates, ahead of Jeremy Hunt. Tugendhat has put together a steering committee of supporters and his backers include the former cabinet minister Damian Green and the “red wall” MP Aaron Bell.

Tugendhat confirmed that he would stand on Thursday evening, after discussions with allies to determine whether he had the numbers to mount a challenge.

The chairman of the Commons foreign affairs committee, who has never served in government, said he would offer the party a “clean start”.

Writing in the Daily Telegraph, he said: “I am putting together a broad coalition of colleagues that will bring new energy and ideas to government and, finally, to bridge the Brexit divide that has dominated our recent history.

“I have served before – in the military, and now in parliament. Now I hope to answer the call once again as prime minister. It’s time for a clean start. It’s time for renewal.”

The attorney general, Suella Braverman, whose campaign will be run by her former parliamentary private secretary, Jason McCartney, has met MPs from the rightwing Common Sense Group in order to gain the mantle of the true Brexiter in the contest – which her backers say she will attempt to steal from Sunak.

Grant Shapps seemingly entered the race via an appearance by his junior minister Robert Courts on the BBC’s Newsnight.

“Because of the challenges the country has, because we’re still pulling out of the pandemic and cost of living issues, I think we need someone who has experience and someone able to campaign and deliver,” Courts said.

“Someone like Grant Shapps, my boss, I’ve seen him work at close quarters and I think he has done an outstanding job.”

Johnson will remain in place until the party chooses a new leader – a process the 1922 Committee hopes to conclude as swiftly as possible. At the podium outside Downing Street, Johnson he was “sad to be giving up the best job in the world” but “them’s the breaks”.

The PM was pictured hugging his family inside No 10 after his speech, carrying his son Wilfred as he kissed Carrie, who was holding their nine-month-old daughter, Romy.

Former prime minister Sir John Major intervened to call for Johnson to be removed immediately – but several moderate Tories, including Greg Clark and Robert Buckland, agreed to serve in a caretaker cabinet, helping to convince MPs to allow Johnson to remain in post.

The Labour leader, Keir Starmer, said his party would table a motion of no confidence in the government in the House of Commons if Johnson did not step aside straight away.

“He needs to go; he can’t cling on in this way. His own party have now decided that he’s unfit to be prime minister. They can’t now inflict him on the country for the next few months,” he said.

“If they don’t get rid of him, then Labour will step up, in the national interest, and bring a vote of no confidence, because we can’t go on with this prime minister clinging on for months and months to come.”

It is expected that the motion will be voted on next week. The government is almost certain to win, given the Tories’ comfortable majority – but Labour will hope to make political capital from forcing MPs to back Johnson in the voting lobbies.

The cabinet reshuffle was carried out in the final hour before Johnson’s resignation speech, with James Cleverly taking over as education secretary, and longtime loyalist Kit Malthouse becoming chancellor of the duchy of Lancaster.

Buckland will be Welsh secretary, and Clark will take over the job of levelling up, replacing Michael Gove, who was ruthlessly sacked by Johnson late on Wednesday evening as he fought to save his premiership.

The new cabinet met on Thursday afternoon. An official readout said Johnson had “made clear the government would not seek to implement new policies or make major changes of direction, rather it would focus on delivering the agenda on which the government was elected. He said major fiscal decisions should be left for the next prime minister.”

Twelve more junior appointments were announced later on Thursday, with some of those who resigned earlier in the week accepting their old jobs back. These included young people’s minister Will Quince, who quit after being sent to face the media with false information about what Johnson knew of Pincher’s past.

Even government insiders were taken aback at the speed of Johnson’s ultimate demise, after months of morale-sapping scandals, including Partygate and the botched bid to protect the backbench MP Owen Paterson, who was found to have engaged in paid lobbying.

One warned that had Johnson not agreed to go, he was at risk of “becoming Trumpian”.
#Boris Johnson  #Johnson  #vaccine  #Covid
Add Comment