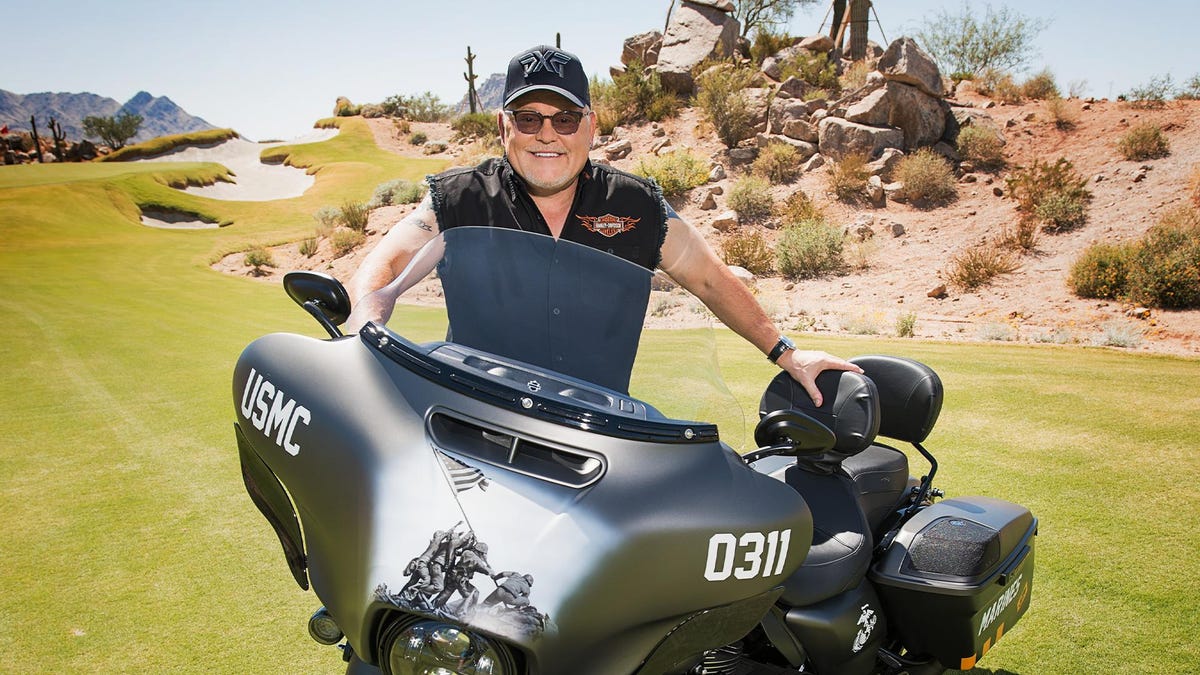 The Marine infantryman still suffers from PTSD from his tour in Vietnam but credits LSD and MDMA with helping him “come home.” Now he’s on a mission to help other veterans.
On March 1, 1969, Bob Parsons was carrying a rifle through a rice paddy in the Quảng Nam province in Vietnam. As an 18-year-old grunt with Delta Company, 1st Battalion, 26th Marines, the Maryland native was painfully aware that dying 9,000 miles from home was a very real possibility.

“I wasn’t there four hours before I saw my first taste of grisly combat,” the billionaire founder of GoDaddy says in his distinct Baltimore accent.

On his first day operating off of Hill 190, the North Vietnamese threw a grenade at his battalion, but it didn’t go off. A soldier picked it up and tried to hurl it back, but it exploded and he “got pretty mangled,” Parsons says. The next night, the squad’s point man was walking on a dike when he hit a tripwire, detonating another grenade. The soldier’s legs were shredded and Parsons carried him to the medevac unit. His team went on ambushes every night, slogging through paddies, covered in leeches and mosquitoes. One pitch-black night, a month after arriving, Parsons was second point man on an ambush, moving through a village, when he hit a tripwire.

“When it first went off, I didn’t know it was me,” the 71-year-old entrepreneur recalls from his home in Phoenix. “I was totally in the moment; I went to stop the bleeding in one part of my leg and then I saw my elbow sticking out of my arm. It’s hard to frame what I was thinking—it’s like when you see something awesome for the first time, you’re wide-eyed and absorbing whatever you’re taking in.”

In 1997, Parsons started a Web design company that would eventually become his most famous venture—domain name reseller GoDaddy, which would become notorious for its raunchy Super Bowl commercials. He became a billionaire in 2011 when he sold the majority of GoDaddy to private equity investors, earning $900 million in cash and shares in the publicly traded company. He is now worth some $3.4 billion.

But like many Vietnam veterans, Parsons was still haunted by the war. He didn’t know what to call it, but he realized his personality was completely different from the young kid from Baltimore who grew up poor. Thanks to post-traumatic stress disorder, Parsons had a hair-trigger temper and didn’t want to be around people. “It most certainly cost me two marriages,” he says.

He tried therapy to ease the PTSD, but it wasn’t until 2018, when he read Michael Pollan’s book about psychedelic-assisted therapy, How to Change Your Mind, that he thought about using mind-altering drugs. Parsons mentioned to his third wife, Renee, that he wanted to try therapy with psychedelics and within two months she had set up a trip down in Hawaii, where they own a home. Under the supervision of a trained therapist with vast experience helping people through a psychedelic journey, Parsons underwent multiday therapy sessions.

The treatment involved a series of Schedule I drugs—including psilocybin (the hallucinogen in “magic mushrooms”), DMT (the active ingredient in ayahuasca) and LSD—meaning they are banned by the federal government and believed to have a high potential for abuse and no medical value. “For four days I was at it: The first day it was ayahuasca, the second day mushrooms,” Parsons says. “The third day, I just played golf. I'd never putted so good in my whole life, before or since. I mean it was like the green was saying ‘Hit it is here, Bobby,’ and it would go right in.”

Psychedelic-assisted therapy is “not a happy, pleasant thing,” Parsons says. “Now I do it with a purpose.”

On the fourth day, Parsons took “good old-fashioned LSD.” The drugs helped him relax and “talk through a lot of stuff. Tears. It was not easy,” Parsons says in his gruff voice. Psychedelic-assisted therapy is “not a happy, pleasant thing,” he says, explaining that he relives many of his traumatic experiences during a session.

Humans, of course, have used psychedelics in cultural and religious rituals for thousands of years. Then in the 1950s, the U.S. government spent millions of dollars to fund studies on drugs such as LSD, which was legal at the time. The psychedelic compound was discovered in 1943 by Sandoz chemist Albert Hofmann while he was studying ergot, a fungus that grows on rye. A few years later and through 1966, Sandoz provided LSD and psilocybin to psychiatrists and researchers to study their effects and potential as a treatment for alcoholism, opioid use disorder, depression and anxiety associated with terminal cancer in conjunction with therapy. By 1968, LSD had become synonymous with the counterculture revolution, and two years later, President Richard Nixon launched a war on drugs, banning psychedelic substances and drying up funding for research.

It wasn’t until the early 2000s when academic interest in psychedelics started to pick up again. Today, the psychedelic renaissance is under way as promising studies out of Johns Hopkins, Imperial College London, New York University, Yale and other institutions suggest that drugs such as psilocybin and MDMA possess therapeutic potential for various conditions, including depression, PTSD and addiction.

A cottage industry has blossomed from the research, with publicly traded biotech companies racing to get FDA-approved psychedelic-assisted therapy to market, disrupt mental healthcare, and rake in billions of dollars. Prescription sales for depression medication is estimated to be $50 billion a year globally, while the total mental health market is worth about $100 billion in annual sales. Pharmaceutical analysts say that FDA-approved psychedelic-assisted therapy could seize $10 billion in annual sales by targeting the treatment-resistant depression subcategory alone.

There is still a lot of work to be done to prove the efficacy of these drugs, but Parsons needs no convincing. Nor do medical researchers in the space who see dramatic results with patients, although nothing has been proven, says Rachel Yehuda, director of Mount Sinai’s Center for Psychedelic Psychotherapy and Trauma Research.

“We are smarter in the way we wage war in that we have fewer physical casualties, but we’ve just replaced physical casualties with mental health casualties,” says Yehuda, who is conducting a study on MDMA-assisted therapy with veterans suffering from chronic PTSD. “With MDMA-assisted psychotherapy, we don’t know enough, and we have to do the research to find out whether this is better than the current standard of care, what veterans need when they receive this kind of therapy, how long—and we’re just doing the work to find out.”

Parsons is among those leading the charge, but he is not interested in starting a business in the field. Even though he sees tremendous economic potential, he has embraced the role of the billionaire donor. Parsons and his wife’s largest donation was $5 million to Mount Sinai’s psychedelic research center, which Yehuda is using to train and educate therapists in MDMA-assisted therapy. Some of that money will go to the Bronx Veterans Medical Research Foundation, which is affiliated with the James J. Peters VA Medical Center, to train therapists who work for the VA and Defense Department to deliver this therapy in a group setting for veterans. Parsons also donated $2 million to the Multidisciplinary Association for Psychedelic Studies (MAPS), which is likely to become the first company to gain FDA approval for therapy using MDMA to treat PTSD. Maps’ phase 3 trial on MDMA-assisted therapy, a double-blind, placebo-controlled study, which was featured in the June issue of Nature Medicine, found that 67% of participants who received MDMA combined with psychotherapy no longer qualified for a PTSD diagnosis two months after treatment, compared with 32% in the placebo group.

And Parsons is not the only billionaire putting his money into psychedelics. PayPal founder Peter Thiel (net worth: $5.2 billion) invested in Nasdaq-traded German biotech Atai Life Sciences, which owns a suite of companies conducting clinical trials on various psychedelic molecules, including Compass Pathways, which is developing a patented form of psilocybin to be used in conjunction with therapy to treat depression. Atai has produced its own billionaire, Christian Angermayer ($1.3 billion). Hedge fund billionaire Steven Cohen ($17.4 billion), author of the Four-Hour Workweek, Tim Ferriss, cofounder of WordPress Matt Mullenweg and Toms Shoes founder Blake Mycoskie donated $17 million to build the Johns Hopkins Center on Psychedelic and Consciousness Research.

“What I think psychedelics did was a reset. Now, I'm like people who haven't been in combat to a certain degree. But I still have memories no one should ever have to have.”

Roland Griffiths, a renowned psychopharmacologist and the founding director of the Johns Hopkins center, says ultrawealthy philanthropists are responsible for the majority of the industry’s funding. “When we started our studies in 2000,” he says, “there was no chance of getting any federal support and it’s still in its infancy. Virtually all the support was provided philanthropically, which has made all the difference in the world.”

Despite having positive results with psychedelics, Parsons—who also founded PXG, a successful golf equipment company, owns several motorcycle dealerships and the Scottsdale National Golf Club, and manages his own hedge fund and real estate portfolio—admits he is not completely cured. He still uses psychedelics in a therapeutic setting a few times a year. About two months ago, he did a group psychedelic therapy session with two of his Marine buddies—a machine gunner and the squad leader. “What I think psychedelics did was a reset,” he says. “Now, I'm like people who haven't been in combat to a certain degree. But I still have memories no one should ever have to have.”

After returning from Hawaii, his family, friends and employees saw a change in his demeanor. He was nicer, softer, even kind. “I’m worried about Dad,” Parsons’ son said at the time. “He’s been calling me more and he’s so nice to me. I worry that he found out that he’s going to die shortly.”

But Parsons wasn’t dying. For the first time since he learned how to kill and remain calm under enemy fire, Parsons actually felt like his old self. “What I will tell you,” he says, “it’s been 50 years since the war and I finally came home.”
Add Comment