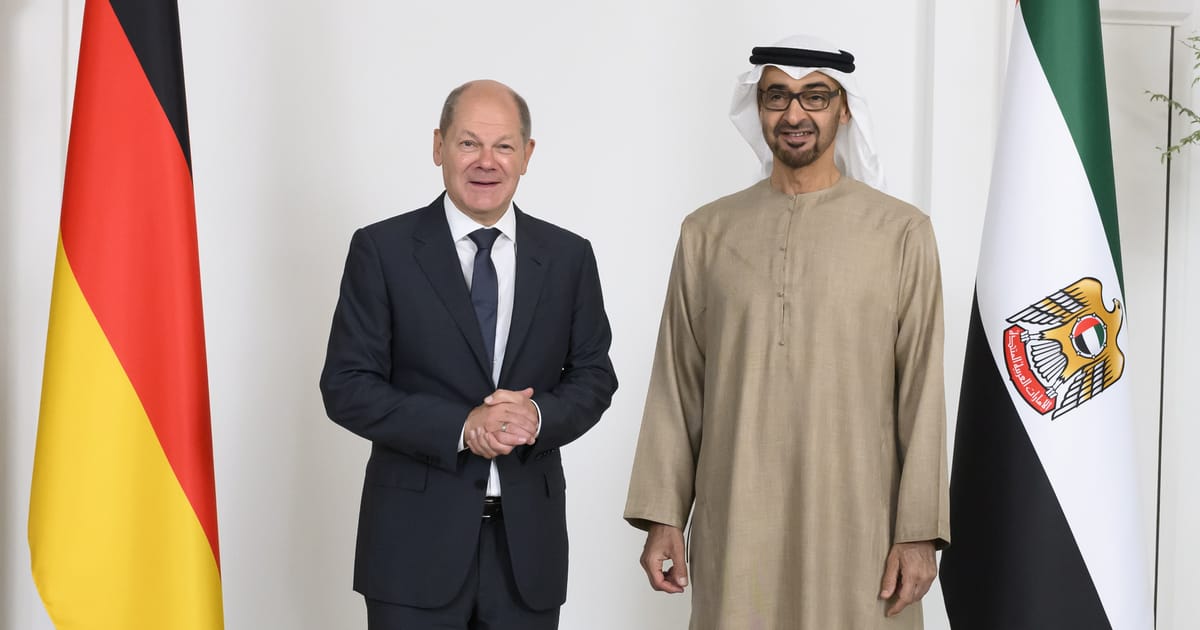 Olaf Scholz culminated a two-day trip to the Persian Gulf region by signing a gas deal with the United Arab Emirates (UAE) on Sunday, but the German chancellor's mission was overshadowed by human rights concerns.

Amid Russia's halt in gas deliveries to Germany and skyrocketing energy prices in Europe, Scholz traveled to the region to secure alternative supplies for his country's energy-hungry economy.

His trip came as France's TotalEnergies announced a big deal with Qatar on Saturday, under which the French energy giant will invest in the exploration of a new gas field for exports of liquified natural gas (LNG) and will take a 9.4 percent share of the project.

During a stopover in the UAE capital of Abu Dhabi on Sunday morning, Scholz signed a contract for delivering 137,000 cubic meters of LNG, which is supposed to arrive in northern Germany at the end of this year, according to German energy provider RWE. The delivery will thus likely come in time to help Europe's largest economy to overcome a gas scarcity this winter and deal with the fallout of what Scholz has described as Russian energy "blackmail."

However, the LNG deal can only make up for a small part of the 56.3 billion cubic meters of gas that Germany received from Russia in 2020. German energy providers have been seeking to replace the Russian gas with last-minute purchases on the world market, but those come at a much higher price.

The UAE deal, which also includes additional LNG deliveries in the coming years, comes at a fixed price and is therefore more advantageous. Scholz recently said that his country "will come through this winter."

The gas deal is part of a broader "Energy Security and Industry Accelerator Agreement" between Germany and the UAE, which "will enable the swift implementation of strategic lighthouse projects on the focus areas of renewable energies, hydrogen, LNG and climate action," Scholz said.

The chancellor, who is accompanied by a business delegation, also signed a deal for the supply of 33,000 tons of diesel to Germany this month, and further monthly diesel supplies of up to 250,000 tons.

Scholz will continue to Qatar later on Sunday for additional energy talks before heading back to Berlin early Monday.

The chancellor's trip comes amid persistent concerns about the human rights situation in the Gulf region.

On Saturday, Scholz paid a visit to Saudi Arabia, where he met with Saudi Crown Prince Mohammed bin Salman to talk about a variety of business issues, including German investments in the future production of green hydrogen in the Arab country. Both leaders also discussed Russia's war in Ukraine, over which Scholz sought to convince bin Salman to take a harder line toward Moscow, and the war in Yemen.

Not long ago, bin Salman was a pariah on the international stage over his reported role in approving the murder of Washington Post journalist Jamal Khashoggi by Saudi government agents.

Asked whether he raised Khashoggi's murder with the crown prince, Scholz said on Saturday: "We discussed all the issues that revolve around questions of civil and human rights. That is how it should be. You can assume that nothing has remained undiscussed that needs to be said."

The chairwoman of the German parliament's human rights committee, the Free Democratic Party's Renata Alt, had urged Scholz to clearly address human rights concerns during his visit to Saudi Arabia and also the UAE and Qatar.

"As important as it is to secure energy supplies to Germany, it is equally important to respect human rights worldwide. You cannot negotiate about one without addressing the other," she said.

Ahead of the Gulf trip, a senior German official had argued that it was important to strike a balance between business and energy security interests on one side and human rights concerns on the other.

"It's a situation that you always have in international relations," the official said. "You have to consider: What are the interests of our country, what are the interests of Europe, what role does Saudi Arabia play in this strategic neighboring region? The prospect that the crown prince will steer the fortunes of the kingdom for the next 10, 20, 30 years suggests that we need a solid working relationship in which differences can and must be discussed, but in which we also take note of the fact that there is a whole range of partnership approaches between Germany and the kingdom," the official said.

"We are not sitting here in world court over third countries," the official continued, stressing that Germany and other Western countries would also talk to Saudia Arabia in the G20 format, "without making any concessions about our clear condemnation and classification of Mr. Khashoggi's murder ... these things exist in parallel; that is the reality."