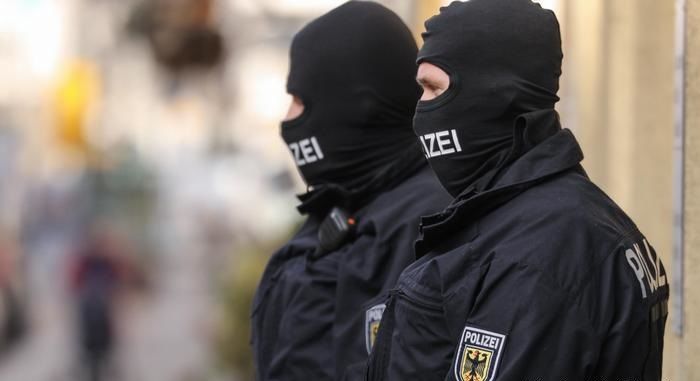 Four suspected right-wing extremists have been arrested after police conducted early morning raids. Banned neo-Nazi groups were the focus of the operation.

Authorities said they searched the residences of 50 suspected right-wing extremists. Some 11 other locations were also searched.

A spokesperson for the state prosecutor's office said four suspects were arrested, German magazine Der Spiegel reported. The suspects are believed to be leaders of K51, one of whom is also being investigated in connection with AWD.

Some of the suspects face charges of being members of terrorist groups, others of being part of a criminal organization, according to Der Spiegel.

What is Atomwaffen Division?

AWD is a neo-Nazi terror organization that started out in the US and is made up of leaderless terror cells. Members of the US group have been linked to at least five murders.

A splinter group was set up in Germany in 2018. Their flyers were spotted around Berlin as well as in a neighborhood in Cologne that was targeted by the neo-Nazi terror group National Socialist Underground (NSU) more than a decade prior.

People claiming to be members of the organization also sent death threats to German Green politicians Cem Özdemir and Claudia Roth in October 2019.

The state prosecutor's office is investigating 10 suspected members of the group, five of whom were targeted by Wednesday's raids. The office said investigations had begun in September 2019.

According to Der Spiegel, one of the suspected members of AWD is a former military officer cadet. He had been under observation by the German military counter-intelligence organization (MAD) that keeps tabs on neo-Nazi activity in the Bundeswehr, but they were unable to cut off his access to weapons and munitions.

C18 first appeared in the UK in the 1990s as the street-fighting wing of the far-right British National Party (BNP).

Authorities were aware of the group's presence in Germany by the end of the decade. They were involved in neo-Nazi events and far-right music festivals.

A suspected C18 member shot dead a Tunisian man in a supermarket in 2007. The assailant spent eight years in prison during which time he sparked up a relationship with the only surviving member of the NSU, Beate Zschäpe.

According to German public broadcaster ARD, he was also targeted by Wednesday's raids. Investigators believe C18 had other connections with the NSU, who murdered ten people between 2000 and 2007.

Combat 18 was eventually declared illegal in 2020, a move that was heavily criticized as being too little too late, German broadcaster Tagesschau reported.

The other group under fire, K51, were targeted after they tried to set up a "Nazi hood" in the town of Eisenach in the eastern German state of Thuringia. Germany's attorney general named the group a criminal organization and ordered the arrest of four suspected members.

The federal prosecutor's office said that members of the group were involved in protests against hygiene measures to slow the spread of COVID-19 in cities such as Leipzig and Kassel that resulted in violent clashes with police and counter-protesters.