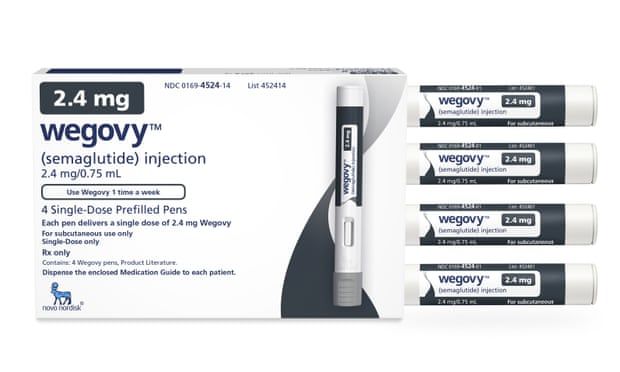 ‘Gamechanging’ weight loss drug to be made available on NHS

Nice approves use of semaglutide, opening door to new treatment for thousands of adults with obesity
Thousands of people with obesity in England will be able to get a new weight loss drug on the NHS after a watchdog approved its use.

Patients on the weekly injections have seen their weight fall by an average of 12% after one year, the National Institute for Health and Care Excellence (Nice) said.

It has issued draft guidance recommending semaglutide, also known as Wegovy, for adults with at least one weight-related condition, such as obstructive sleep apnoea or heart disease, and a body mass index (BMI) of at least 35.

In exceptional cases, some people with a BMI of 30 or more may also be able to access the drug, which is self-administered using a pen injector.

More than one in four people in England have obesity, which means having a BMI of 30 or above. Obesity can be physically debilitating and lead to severe and potentially life-limiting conditions. It costs the NHS and the wider economy billions of pounds a year.

The new drug suppresses the appetite through mimicking the hormone glucagon-like peptide 1 (GLP-1), which is released after eating. Patients inject themselves with semaglutide, which makes them feel full, meaning they eat less and lose weight.

“We know that management of overweight and obesity is one of the biggest challenges our health service is facing, with nearly two-thirds of adults either overweight or obese,” said Helen Knight, the programme director in the centre for health technology evaluation at Nice.

“It is a lifelong condition that needs medical intervention, has psychological and physical effects, and can affect quality of life.

The Nice document says access to current drug treatments for obesity is limited to a specific population who have prediabetes and a risk factor for cardiovascular disease. Other drug treatment options available are “poorly tolerated” and “rarely used”.

It adds: “The committee concluded that there is a large unmet need for many people living with obesity, and that semaglutide would be a welcome new treatment option.”

Nice said people from a south Asian, Chinese, and black African or Caribbean background would be able to access the drug at a lower BMI after advice from a medic.

Patients will only be given semaglutide on prescription as part of a specialist weight management service involving input from several professionals, and for a maximum of two years. Clinical trial evidence shows that people lose more weight with semaglutide together with supervised weight loss coaching than with support alone.

Experts have previously described the drug as “a gamechanger”, and suggested that for the first time people could achieve through drugs what was only previously possible through weight-loss surgery.

In 2020 Boris Johnson launched the government’s anti-obesity strategy, which included plans for a ban on TV and online adverts for food high in fat, sugar and salt before 9pm and ending deals such as buy-one-get-one-free on unhealthy food high in salt, sugar and fat.
#Boris Johnson  #Johnson
Add Comment