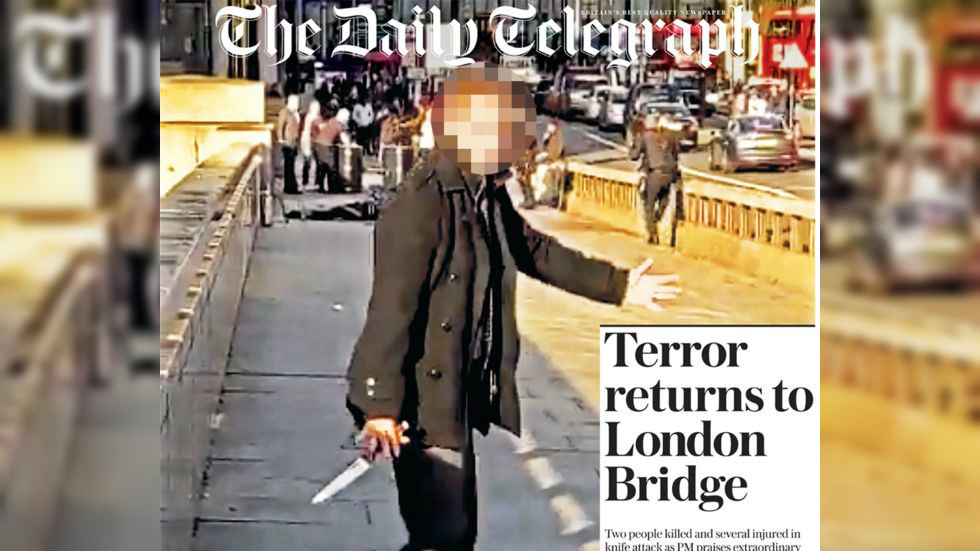 The Telegraph is facing severe criticism for covering its front page with a photo of the brave man who stripped the London Bridge attacker of his knife alongside a headline which appeared to point the finger of blame at the hero.

“Terror returns to London Bridge,” screamed the main headline on the British daily newspaper alongside a photo of the man holding one of Usman Khan’s blades, which he dispatched to safety as he joined a group of citizens in tackling the jihadist.

The combination of the photo and the strange choice of words caused a great deal of confusion and anger on social media, as many pointed out that it made it appear as if the man in the photo was the knife attacker.

Journalists and other people who work in the news industry were particularly baffled by the front page, with many noting that the paper appears to have defamed the man.

Awful photo choice. This man (hero) took the knife from the terrorist! Sort it out @Telegraph.

“Does this fella want to be on the front of a national newspaper like this? If you’ve not seen the video of a man being shot to death you’d be forgiven for thinking this guy was the perpetrator,”tweeted Athletic writer Sam Lee.

“Not sure if I’d just risked my life and disarmed a murdering terrorist I’d be happy with this front page,”added ITV News presenter Steve Scott, while radio presenter Alex Belfield described it as “appalling journalism.”

One of the worst front pages I’ve ever seen. What on earth are they thinking? Who pressed send? Dear me

A number of brave civilians teamed up to subdue Usman Khan after the extremist embarked on his murderous rampage in the London Bridge area on Friday. Those involved in taking down the knife attacker reportedly included a convicted murderer on day release, a man with a fire extinguisher, and a Polish chef called Luckasz armed with a narwhal tusk.

Imagine going to university and working THAT hard for so long just be dumb enough to decide unanimously amongst everyone involved that this was a good idea. It’s honestly quite incredible how many people must have looked at this and thought ‘yeah, that’s fine.’

Khan stabbed five unarmed people during his cowardly assault. Two of his victims died from their injuries.