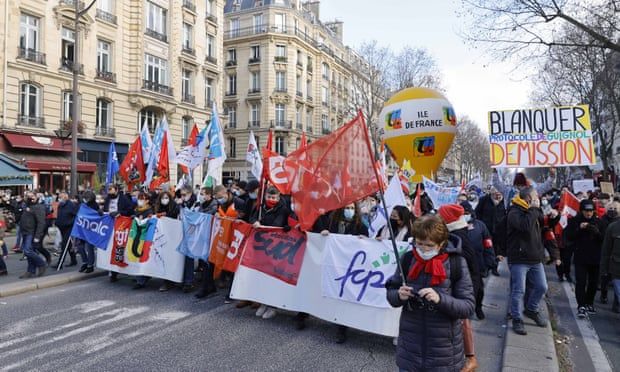 French teachers walk out of classrooms in strike over Covid strategy

Tens of thousands take part in one-day strike, one of the biggest in the sector in recent years

French teachers have held one of the biggest education strikes in recent years, forcing the closure of hundreds of primary schools in protest at the government’s handling of Covid-19 measures in the education sector.

Tens of thousands of teachers took part in the one-day strike. Trade unions said 75% of primary teachers walked out alongside 62% of secondary teachers. The education ministry gave much lower figures on Thursday morning, saying there was an average of 38.5% of teachers on strike in primary schools, and just under 24% in high schools. Teachers and education support staff joined a protest march through the centre of Paris to the education ministry, and others demonstrated in towns across France.

The French prime minister, Jean Castex, announced he would meet teachers’ union representatives late on Thursday in an attempt to calm the anger.

“We had reached such a level of exasperation, tiredness, and anger that we didn’t have any other option but to organise a strike to send a strong message to the government,” said Elisabeth Allain-Moreno, national secretary of the SE-Unsa teachers’ union.

Laurent Berger, secretary general of the CFDT union, said: “This is not a strike against the virus, it’s a strike against the lack of consultation.” He said teachers had been treated with “disdain”, only informed of changing Covid protocols at the last minute, and there should be more “dialogue”.

President Emmanuel Macron this week restated the government view that one of France’s greatest successes during the pandemic had been to keep schools open more than any other country in the world. “I fundamentally believe the choice that we made to keep schools open is the right choice,” he said.

“France is the country that kept its schools open the most,” the education minister, Jean-Michel Blanquer, has said.

But a surge in Covid infections, driven by a sharp rise in the highly contagious Omicron variant, has created major disruption in schools since they reopened at the start of January – with about 10,000 classes closed because of infections among pupils and staff. 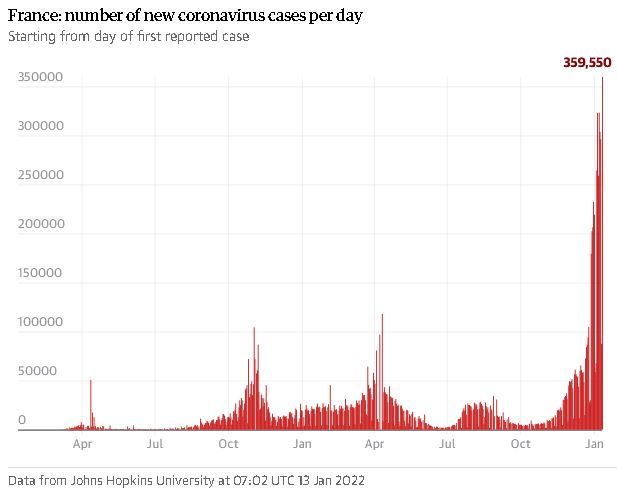 Parents and children have faced long and often bewildering queues outside pharmacies to be tested in order to keep up with the requirements for pupils in a class where there has been a positive case. Testing rules for children have changed several times since the start of January. Castex finally announced this week that a series of home tests could now be used to determine whether a student can return to school.

Children over the age of six must wear masks in French schools.

Teaching unions said the government was failing children with a disorganised approach that provided inadequate protection against infection for staff and students alike, and failed to ensure replacement cover for teachers falling ill while leaving schools acting as a form of test-and-trace managers.

“Students cannot learn properly because attendance varies wildly, and a hybrid of in-house and distance learning is impossible to put in place,” the SNUipp-FSU said, adding that absent teachers were not being replaced.

Unions are also demanding the government provides the more protective FFP2 face masks for staff, and CO2 monitors to check whether classrooms are sufficiently ventilated.

“Not only does the current protocol not protect students, staff or their families, it has completely disorganised schools,” the union said, claiming that classes have effectively been turned into “daycare centres”.

Valérie Pécresse, a key challenger to Macron in this spring’s presidential election race from the rightwing Les Républicains party, accused the government of disorder and chaos, saying it would have been better to defer the start of the January term to allow schools to prepare and to slow transmission rates.

Blanquer argued this week that the government was doing everything possible to avoid outright school closures that could cause havoc for parents and jeopardise learning for thousands of children, especially those from low-income families. “I know there is a lot of fatigue, of anxiety … but you don’t go on strike against a virus,” he said in a TV interview.