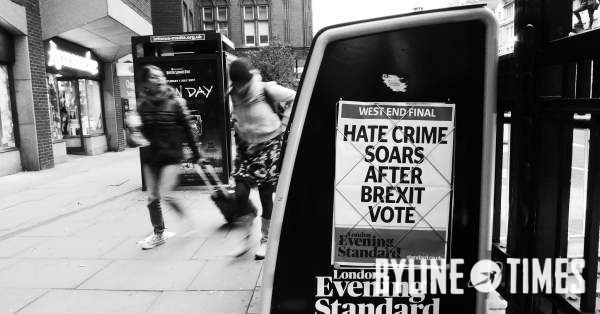 An internal Home Office report reveals the high proportion of abuse victims who say the incident was motivated by their racial, religious or sexual identity.

One of these reports evaluates the Home Office’s recent hate crime public awareness campaign. The campaign was “designed as an initial step to promote understanding about hate crime, address the beliefs and attitudes that can lead to it, and demonstrate that the Government takes it seriously,” the report reads.

A hate crime is defined as “any criminal offence motivated by hostility towards a person’s actual or perceived race or ethnicity, religion or belief, sexual orientation, transgender identity or disability.” This can include, for example, verbal or physical abuse of an individual due to their identity. As acknowledged by the report: “The volume of police-recorded hate crime is on an upward trend.”

The document produces data on the thousands of people surveyed during the course of the hate crime public awareness campaign. Of the people surveyed with ‘protected’ characteristics – including transgender identity, disability, sexual orientation, religious beliefs, and race or ethnicity – 57% of abuse victims said they believed the incident was motivated by their identity.

According to the report, 86% of black and minority ethnic individuals who have experienced abuse say it was motivated by their identity, while 95% of Muslims and 92% of lesbian, gay and bisexual people say the same.

The Home Office report also tries to evaluate the volume and background of people who are sympathetic towards “view and behaviours that could constitute, or potentially lead to, committing a hate crime or incident.”

People fell into this category if they expressed strong agreement with two or more of the following statements:

*  People have the right to say what they want, even if it offends others

The War on ‘Woke’

These finding are particularly interesting amid the present debate about “wokeness” – framed around the rights and the treatment of minority groups.

Indeed, it has been claimed by some individuals that attempts to guard against abusive language and actions in fact amount to an attack on free speech. It is commonly asserted in turn that Britain is one of the least discriminatory places in the world, and therefore concerns about institutional racism, for example, are overblown.

As explained by Jonathan Portes in these pages, the Government’s recent Commission on Racial and Ethnic Disparities did not find evidence of institutional racism in Britain, primarily because its methodology did not allow for this explanation. The Commission consequently stated that Britain “should be regarded as a model for other white-majority countries”.

Yet, in 2019-20, 105,000 hate crimes were recorded in England and Wales – an increase of 8% on the previous year, while almost three-quarters of these hate crimes were racially motivated. The Government claims that improved police recording is a primary explanation for the increases, yet the Home Office report acknowledges that there have also been “genuine increases following incidents such as terrorist attacks”.

The above statistics confirm this picture, with a large proportion of abuse victims saying they have been targeted because of their racial, sexual or religious identity.