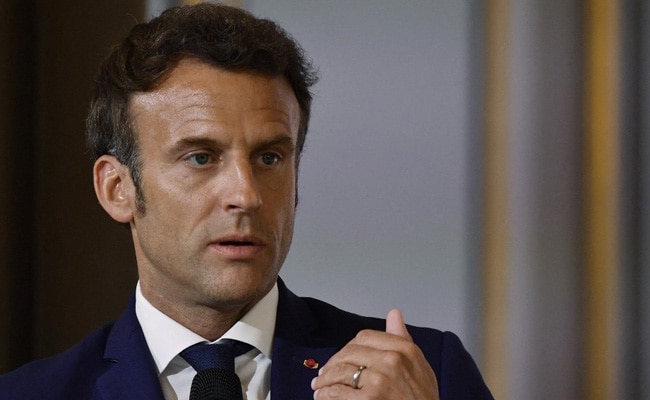 "Today, first of all, Vladimir Putin must stop this war, respect Ukraine's territorial integrity and come back to the table for talks," Macron told broadcaster France 2, saying he aimed to avoid a "global war".

Asked if he would back a Ukrainian offensive to recapture Crimea -- annexed by Russia in 2014 in a move not recognised internationally -- Macron said that "at some point as the conflict develops" both Russia and Ukraine "will have to come back to the table".

"The question is whether the objectives of the war will only be reached by military means," he said, although "it's up to the Ukrainians to decide" what those aims should be.

When reminded that Ukraine no longer wanted to negotiate with Putin, Macron replied: "I tell you that at some point... it will be necessary. That's why I have always refused maximalist positions."

"We're going to deliver... radars, systems and missiles to protect them from these attacks," Macron said, adding that France was also negotiating to send another six Caesar mobile artillery units.

He said the war had entered "an unprecedented stage" since the weekend because "for the first time all over Ukraine civilians have been killed... and electricity and heating facilities have been destroyed".

"The aim of the Russians these last few days has been to break, to shatter Ukrainian resistance," Macron added.

He acknowledged that France was "unable to deliver as much as the Ukrainians ask for. I'm obliged to keep some for us to protect ourselves and our eastern flank (of NATO)".

The extra Caesar guns have been manufactured for Denmark, but talks are underway to redirect them to Ukraine.
Add Comment